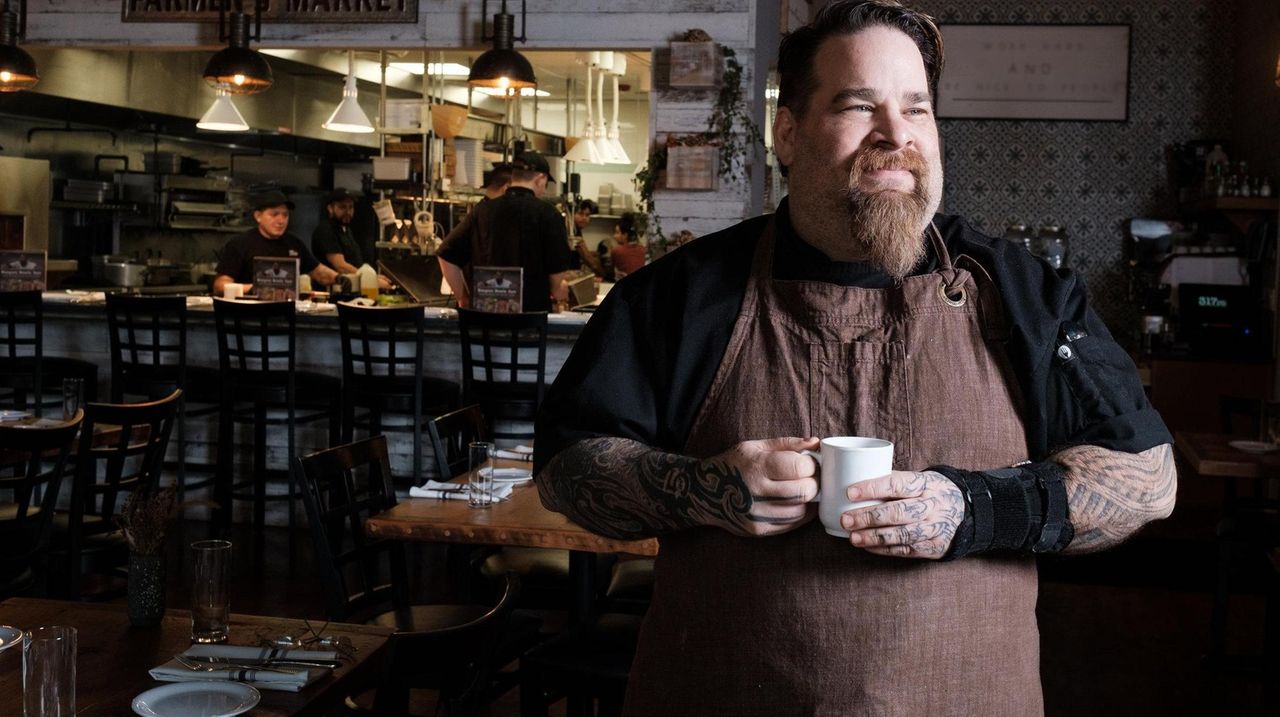 Chef Eric LeVine on Nov. 9 talked about his journey in making the perfect restaurant experience for his customers at 317 Main Street in Farmingdale. Credit: Daniel Brennan

It started with drinks, apps, lots of do-you-know-what-you-want-yets from the harried waitstaff, and table talk about how many menu items representing how many cuisines a gastropub can possess before it becomes just a plain old restaurant. The dinner did not officially begin, though, until the arrival of the salad shaker, which denotes both a person and vessel. A wedge of lettuce was delivered in a sealed jar, dressing and all, whereupon our server agitated it with the gusto of a man twerking while throwing a shot put.

At this point, you’re no doubt wondering what special quality a salad gains by enduring a Richter-registering temblor. I’m still wondering the same thing, and I’ve eaten one. But as the leaves and chunks of cheese and crumbles of bacon tumbled dizzily onto my plate, still heaving from their torturous journey, it appeared that the shaker salad would be a fine one notwithstanding the dramatics, and so it was.

It was also a handy metaphor for chef Eric LeVine, whose career has been marked by trauma and showmanship on its way to the tables of Farmingdale’s 317 Main Street, which seize and thrum with his good cooking. The man whose bio includes a winning episode of the Food Network’s “Chopped” is also one who has battled — and triumphed over — cancer. Five times.

You don’t need to know that to enjoy LeVine’s food, of course, but once you do, meals at 317 Main are thrown into stark relief, stakes are raised, and every dish seems composed of thoughtfulness and pragmatism shaken together. There’s something powerful about the cooking of a man who had eight months to live 15 years ago, and LeVine’s menu is understandably audacious.

Our table ordered the crispy pork sticks, in which shanks are braised, doused with a gingery sauce and scored so that the tender meat can be pulled off in strips. Like the shaker salads, which include an embattled Cobb in addition to the wedge, it’s a starter both unusual and familiar at once. The same goes for the mouthwatering burger, which gets a serious boost from the fried tomatoes it's served with (you might have to ask for them).

LeVine displays equal competence at traditional dishes, and while his eclectic approach means that ramen and tacos, flatbreads and Chinese dumplings might all find their way to a single table in the dining room — there are whole food courts with less choices — no mall effort will ever come close to LeVine’s success rate. My duck ramen, its meat from Crescent in Aquebogue, was both unique and uniquely satisfying, and 317 Main’s dumplings burst open with a bold enthusiasm that Main St. in Flushing would happily embrace.

LeVine is fazed by neither surf nor turf. The crusty sear on his scallops gave way to an otherworldly softness that met its match in the velvety corn risotto undergirding the dish. And you'd be hard-pressed to find a better Connecticut-style lobster roll on either side of the Sound. The bun, despite being sweet and light, supported a surprising amount of lobster meat, and the sandwich screamed for a side of fries which — oh, look, here comes a cup of them now, peppery planks served on the same awkward piece of butcher block as the lobster roll. LeVine’s strip loin was unremarkable and in my case overcooked, but the smashed potatoes went a long way toward rectifying things. And 317 Main’s cakes and other sweets actually earned the elaborate dessert cart, which resembles a plate-spinner’s circus act on wheels and rolls through the dining room with cavalier indifference.

By meal’s end, LeVine had left his whirlwind kitchen and was strolling from table to table — he’s that kind of restaurateur — eventually making his smiling way over to us. For once we were excited to receive a chef, who looked sweaty but pleased with the reception his food had received.

“Thanks, I really appreciate it,” LeVine replied, asking the table to please go on Yelp and tell the world. His voice had the weary sound of a man targeted by many anonymous takedowns, but also the equanimity of a man who’s been through much worse.

“We’ll do even better than that,” I vowed silently.