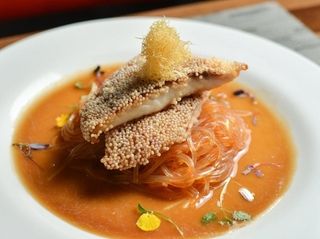 Izumidai, or pan-fried snapper, is finished with a spin on teriyaki sauce and served with sweet potato glass noodles at 360 Taiko Sushi & Lounge in Patchogue. Credit: Daniel Brennan

360 Taiko Sushi & Lounge goes full circle exploring east and west. Tour it on a busy night, and you’ll whirl away.

It’s as if there are four or five destinations stamped on this colorful passport.

The first is applied at the 12-seat, 12-tap bar with five big-screen color TVs tuned to sports, all under a snappy canopy that two brews in may remind you of organ pipes. Sometimes, the decibel level jumps, point by point if not sip by sip.

Near the beer, compact “C”-shaped booths curve tightly. They’re situated below cylindrical, red-shaded lights, and provide an ideal perch to scout the festivities playing out on the entire floor.

Go beyond the carved archway-room divider, deeper into the dining area for slightly elevated, angular banquettes, and, more important, proximity to the busy, eight-seat sushi bar.

Take in all the special effects, the art direction, set decoration, relentless sound system, customer devotion to cellphones that makes you wonder if there could be so many doctors on call.

But 360 Taiko does spur some lively conversation and brings a bright light to the ongoing restaurant boomlet in downtown Patchogue. Its chosen niche is large, and on any night appealing to a crowd that ranges from the recently graduated to the almost retired. The demographics change by the hour.

They deliver Asian fusion with polite, attentive service from a young staff. In this season of extremes, the best advice veers toward moderation, from beverages to food. You can mix-and-match the general Asian, Euro and American offerings with more precise Japanese preparations. Lean to the latter. You’re better off checking the detailed ingredients of each and deciding at what point things are getting out of control, as in Cajun spicy mayo meeting balsamic vinegar or orange mayo colliding with eel sauce.

Pick five-way sashimi, a stylish, silky selection of finfish, each with a dab of a different sauce; and traditional nigirizushi, from baby yellowtail to scallop. Very good pan-fried red snapper, or izumidai, is finished with a spin on teriyaki sauce.

360 Taiko is entertaining, inviting and usually a lot of fun whatever direction you take.