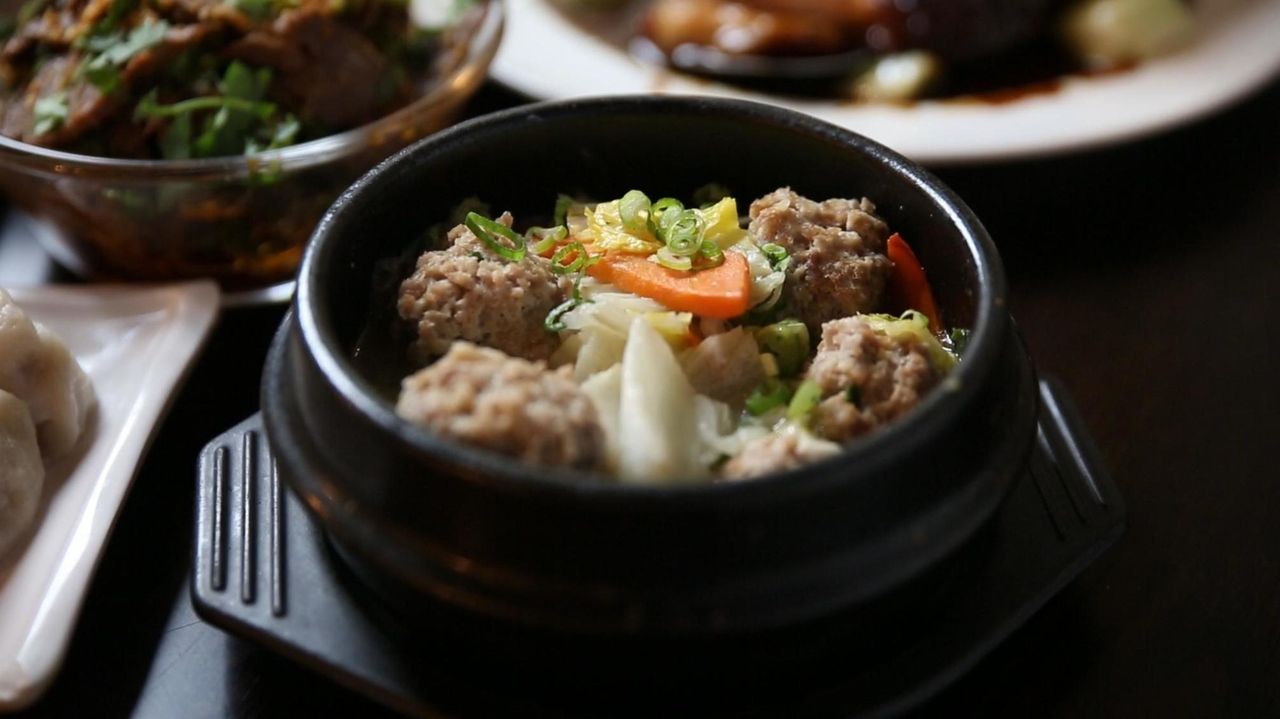 Long Island’s current Chinese restaurant boom is affording local diners an opportunity to embrace the huge range of regional styles that comprise “Chinese food,” and 365 Noodle Bar and Grill is the place to go for the casual eats of Beijing. It’s a second venture from the owners of Beijing House in Syosset, one of Newsday’s Top 10 Chinese restaurants, but the kitchen here, headed by chef Wei Guo Yu, eschews elaborate stir-fries in favor of snacks and street foods: noodles, soups, dumplings, buns and flatbreads.

The restaurant, which took over the site adjacent to H & Y Marketplace that used to be the Korean restaurant Koreana, is one of the most pleasant Chinese dining rooms on Long Island, simple but stylish, with bright green banquets and a smattering of elegant Chinese knickknacks. When you are seated, you’ll receive a dish of salted, roasted peanuts, a glass teapot full of hot tea and an enamelware mug decorated with imagery from the Cultural Revolution.

Instead of spareribs and egg rolls, the starter selection is long on cold body parts: spicy duck heads and necks, pigs ears and feet. You may be surprised at how much you like the beef tendon and tripe: the meat is tender and thinly shaved to obscure its bodily origins, and the sauce gets its spice from chilies and Sichuan peppercorns.

Beijing-style dumplings are not the exquisite, translucent bundles you find in Cantonese restaurants, but in their thicker-skinned stubbiness they are just as satisfying, either steamed or pan-fried. My favorite here are the pork and scallion, but pork-cabbage, pork-string bean and chicken-mushroom also hit the spot.

Even the owners of staunchly regional restaurants are not immune to the siren song of soup dumplings, a specialty of Shanghai. Most Chinese restaurants on Long Island buy them frozen (when your soup dumplings take 15 minutes to show up, that’s why) but 365 makes them on the premises. It’s a noble gesture that I wish I could praise, but soup-dumpling aficionados (a title I have worked assiduously to earn) will find the skins tough and the broth bland.

A common American misconception about China is that it is a nation of rice eaters. That’s true of the South, but the cuisines of the North have a wheaten repertoire of buns and flatbreads, much of which you can sample here. The minced-beef pie is really four tasty little ground-beef-stuffed pan-fried buns. I preferred them to the Chinese burger, whose pork filling was well spiced but whose “bun” lacked soul (and, in truth, grease).

There isn’t any dish listed under “stews” that I would term a stew, but there are many grand soups, particularly the one featuring tender pork meatballs, diaphanous flutters of cabbage and cellophane noodles. Coming in a close second is beef meatball with quarter moons of winter melon. Taking the bronze: shreds of full-flavored lamb in a broth inundated with sour cabbage. All of these are delivered to the table dramatically asimmer.

It’s hard to spend more than $12 on anything at 365, and the relatively pricey “braised pig elbow,” $23.95, easily feeds two. Braised pig elbow? I showed manager Jason Qian a number of Google images, and we determined that this falling-off-the-bone hunk of meat — napped with a deep, glossy mahogany-colored sauce redolent of soy, ginger and five-spice powder — was a pork shank.

365 does a fine job with braised beef noodle soup, a dish that is found all over China. In a fragrant broth, pot-roast-soft chunks of meat mingle with chewy wheat noodles. Chicken noodle soup, however, was dull: underseasoned broth and pallid shreds of white meat.

In fact, for a restaurant that name-checks “noodles,” 365 falls short on the noodle front. Every dish we tried used those same hearty wheat noodles even when, as in the case of the clunky scallion lo mein, the goal is a symphony of tender noodles and scallion oil. Noodles with egg and mushroom sauce was gluey and bland. Beijing-style chajang noodles (commonly rendered in English as zha jiang mian noodles) involved a lot of table-side fanfare as the waiter tossed the noodles with bean sprouts, carrots, cucumbers and fermented bean paste, but the finished product lacked zing.

If 365 Noodle Bar and Grill isn’t the most consistent of Long Island’s brave new Chinese eateries, it’s easily one of the most pleasant. If you add the winning dishes to the affordable prices, comfortable room and the solicitous staff, the total is worth many return visits.