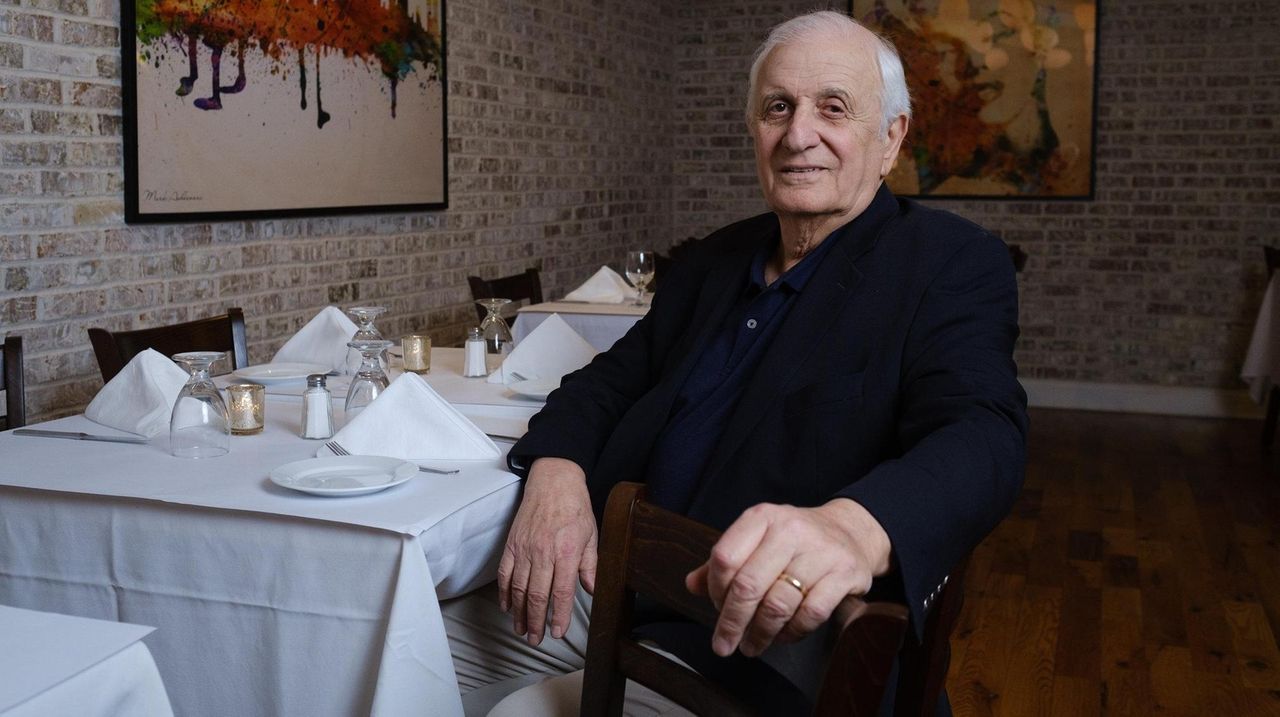 Frank Abbracciamento, owner of Abbracciamento in Lynbrook, spoke about his Italian heritage and how it influenced his work in the restaurant.  Credit: Daniel Brennan

SERVICE: A quiet battalion who are rarely intrusive but always watchful.

AMBIENCE: An elegant, understated palette of cream and white cast across two dining rooms and a theatrical bar.

ESSENTIALS: Open for dinner from 5 p.m. Tuesday to Saturday and 4 p.m. Sunday. Parking (and entrance) from a back lot. Reservations and major credit cards accepted; wheelchair accessible.

By any measure, Frank Abbracciamento had earned his retirement. For decades, the 70-something ran a sprawling Italian restaurant on the Canarsie pier, overlooking Jamaica Bay, that became a touchpoint for a generation of families, politicians and others. After selling Abbracciamento on the Pier in 2001, he oversaw food service at The Explorers Club in New York for the next decade and a half.

And then, he called it quits. For a year. “I was bored,” said Abbracciamento. “I needed to do something else.” Last spring, he and his wife Aniko began hunting for another spot, settling on a former Lynbrook restaurant that needed serious renovation. This, they plunged into for six months — pickling brick, burnishing floors, adding a striking marble-topped bar, oversized prints and glowy wall sconces until the place hummed with a theatrical yet understated white-on-white vibe.

Abbracciamento, the modern redux, opened in November. From the moment you step inside and encounter Frank behind the host desk, with his watchful eyes and snow-white hair, you’ve stepped into a bygone universe. Abbracciamento is far removed from red-sauce tropes; while there are meatballs (and excellent ones) and fresh pasta and marinara, sure, it's all presented with quiet couth by chef de cuisine Will Merget (formerly of EGP Land & Sea and Da Gigi) from a kitchen that seems obsessively focused on honing the details, from ingredients to bulletproof technique.

Avoid carbs here, and it's at your loss. Aniko bakes the house bread, crusty on the outside and stretchy on the inside, and it lands on the table with peppery EVOO. The kitchen makes almost all pasta fresh, save for spaghetti and linguine — from squishy ricotta gnocchi in a bright marinara to supple ribbons of pappardelle with wild mushrooms, fresh cream and a blizzard of Parmesan, the equivalent of bear hug on a freezing day. Even so, this is eclipsed by straw and hay pasta, a steamy tangle of fettuccine dotted with peas and shards of prosciutto that our table passed round and round until the last bit was plucked away. Of the gold-medal pasta field, the only underachiever was cacio e pepe, overcooked and not memorable.

To backtrack, though: Even before you come face to face with pappardelle, one could easily overdo it on appetizers, so stellar are they across the board. Abbracciamento’s meatballs, a recipe which Frank prefers to keep secret, seem blended from a few different meats and are braised to fork-tender, then softened by a dollop of fresh ricotta melting into the sugo below. Baked clams oreganata reach their highest octave, a perfect balance between garlicky breaded caps, clam meats and hidden splashes of briny liquor. Crisp, toasted bruschetta is offered a few ways, but the punchy eggplant caponata is downright attackable. There are ribbons of excellent prosciutto, puddles of melty burrata, deeply blackened Brussels sprouts leaves and salads so perky they defy January, whether arugula with slivered pears and Parmesan to frisee with beets and discs of goat cheese; the proportions on this last one were off, though (more beets, please).

Main courses find a similar harmony, from fat-girded “sweet and sour” T-Bone pork chops that, while slightly dry in the middle, come in a racy agrodolce. A boneless sirloin steak, sliced and arranged in pan juices, rivals the tenderness of more expensive cuts. For Milanese, a floppy, tenderized-into-submission veal cutlet is armored in peppery breading and fried to copper, then smothered in arugula, cherry tomatoes and red onions — a version that trumps chicken by a mile. Though I rarely order salmon, my companion was smart enough to — its uber-crispy skin, velvety flesh and a savory zabaglione sauce (a yolk-hued blend of eggs, cream, lemon and butter) displayed serious cooking chops. Throughout, plates are swept away with constant vigilance from a brigade of servers who are rarely intrusive.

If there's a place where Abbracciamento fumbles, it's wine — the list is compact and gently priced but also a missed opportunity to highlight the polychromatic world of Italian vino. Cocktails tread mostly classic territory, well-crafted and stiff — such as “filthy” vodka martini served with fried capers.

Aniko flexes her baking skills for Abbraciamento’s pastry, but choices were limited; one night, they were comprised of shapeless, ladyfinger-less tiramisu and a much better chocolate mousse and creme brulee.

There are a handful of Italian restaurants around Long Island where tradition pulses in refreshingly modern ways, such as Franina in Syosset and Nick & Toni's in East Hampton. Abbracciamento has instantly joined them, and Frank's restlessness is our reward.