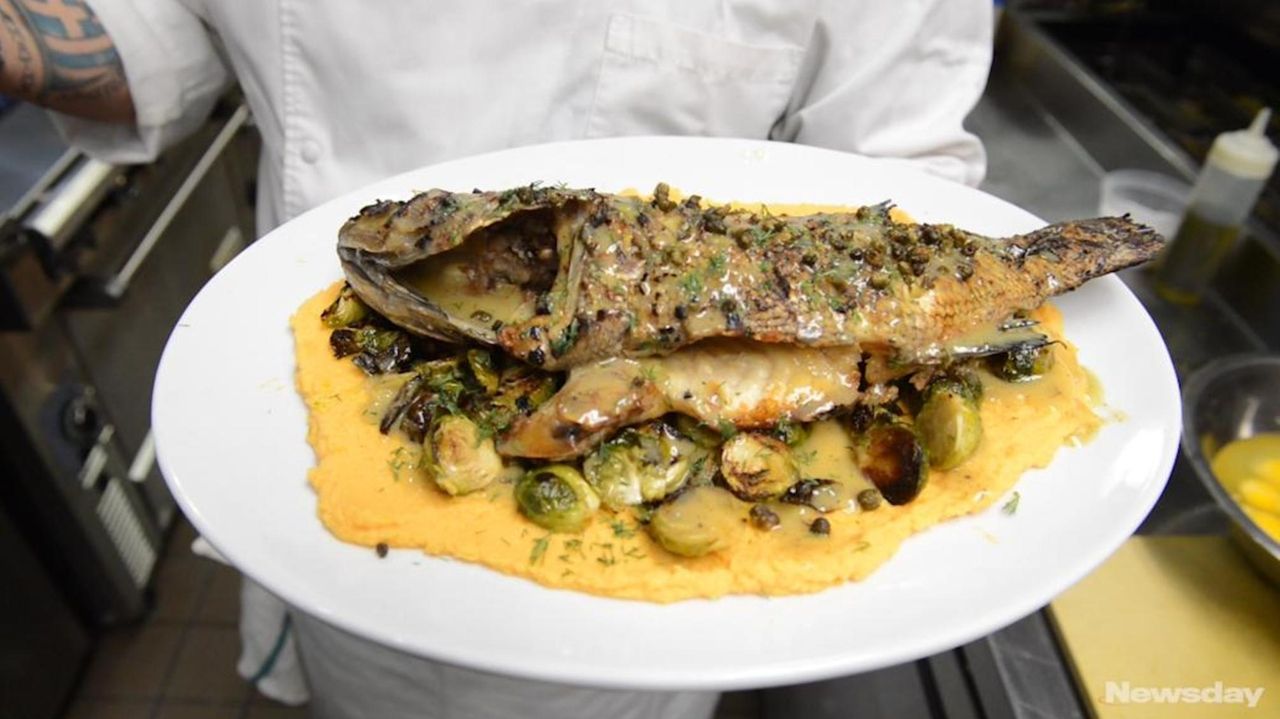 AMBIENCE Sleek and industrial, with a few Hellenic touches

Historically, there have been two types of Greek restaurants on Long Island: wallet-emptying grilled-fish palaces and cheap gyro joints. Neither approximates the experience of eating in Greece, where pretension is at a minimum, but even the most modest taverna produces dishes that are fresh, perfumed with oregano and anointed with the peppery kick of olive oil.

Lately, the lower end of Greek eateries has been raising the bar, with counter-serve, takeout-friendly spots such as Grillmark in Albertson, Go Greek in Garden City and Yiasou Yeeros in Plainview jettisoning the prefab gyro and iceberg lettuce in favor of better ingredients and more authentic flavors.

Ara Greek Kitchen & Bar is trying to bridge the culinary gap from the high end. The restaurant has a full bar and thoughtful wine list (boasting a couple of good, reasonable Greek bottles). Executive chef Chris Bisiotis, a native of the Peloponnese, has worked for Thomas Keller (at Per Se) and Cristeta Comerford (at the White House). His menu covers all the expected bases — mezze and salads, grilled fish and lamb, baklava and galaktoboureko — and adds some unexpected Italian and New American touches. Portions are generous and the prices, when compared with Limani or Kyma, two more Olympian Roslyn restaurants, are reasonable.

The space, formerly a Tony Roma’s, is problematic. It’s divided between a big bar and an even bigger dining room. Most of the designer’s attention seems to have been focused on the ceiling, which manifests a complicated scheme of rope-wrapped ductwork, lattices threaded with plastic greenery, and a fabric wedding canopy that descends from the center of the dining room. But what the room desperately needs is window treatments. Ara is situated in the middle of a vast shopping center and, because two of the dining room walls are essentially all windows, they afford an unobstructed view of Target, Marshalls, HomeGoods, Joann fabric store and Guitar Center. At night, the dining room feels like a neon-ringed fishbowl.

A good way to keep your focus on the table is to order a pizza. Noting Long Island’s seemingly bottomless demand, Bisiotis came up with a roster of Italian pies made with Greek flavors. I was skeptical but entirely won over by the spanakopita pizza, whose crust did a fine job of accommodating an intensely herbal and pleasantly gooey topping of spinach, scallion, dill, feta, mozzarella and ricotta. The same filling (minus the mozzarella and ricotta) was just as pleasing when sandwiched by layers of crisp, flaky, golden phyllo dough in the traditional spanakopita appetizer.

The chef also came up with a winning update of that old fried-cheese warhorse saganaki. His version: golden fried lengths of Graviera cheese stacked, Lincoln Log-style, and accompanied by a compote of lemon and thyme. Octopus, just the right degree of charred, was piled high with thick yogurt, cucumber slices and chickpeas. The grilled loukaniko sausage was plated prettily but was both overcooked and barely warm; it also lacked the aggressive porkiness, zing of orange peel and prick of fennel that mark its Greek soul.

The star among the mains was the whole grilled fish. Yes, farmed branzino is on Ara’s menu, but there’s usually another whole fish available, too, though species and garnishes will vary. One night it was an expertly grilled two-pound red snapper, its garnish of braised cabbage with raisins even better than the fish. Roast chicken was meaty and bronzed, tumbled with roasted grape tomatoes and lemony fingerling potatoes.

But youvetsi (braised lamb shank) was cooked just short of meltingly tender and ultimately damned by a lack of seasoning. The hefty rib-eye also was underseasoned, as was the spinach beneath glassy, stodgy sea scallops.

More than kitchen missteps, the slapdash service made it hard to fully enjoy Ara. Servers were friendly and well-meaning, but we never managed to find one that was both familiar with Greek cuisine and the English language. Entrees showed up before appetizers were cleared. The dining room often was left unattended so that a dropped fork was not replaced. There also was no one to ask for a salt shaker. Eventually there was, and one was brought to the table . . . with no salt in it. Nor did anyone notice one evening that there was no hot water in the restrooms.

This all adds up to a feeling of not being cared for, which is the last thing you want to feel in a restaurant. It wouldn’t take much for Ara to warm itself up — a more engaged management team to train the servers, a little more care in the kitchen and some gauzy curtains to make Commack feel a bit more like Santorini.