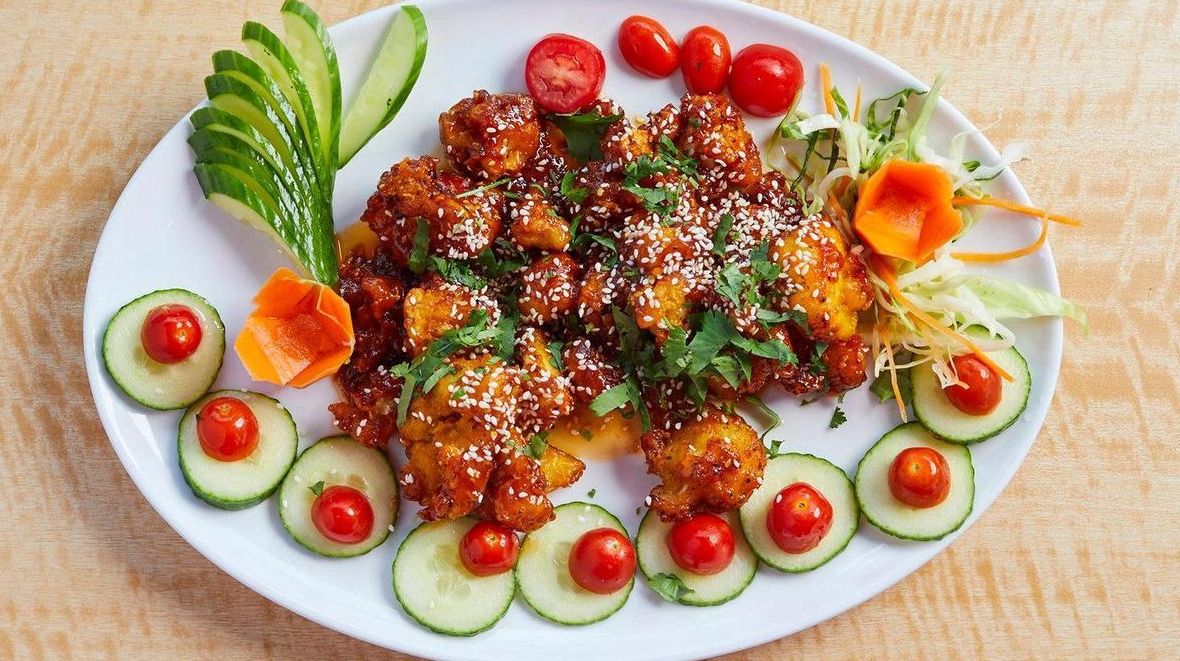 During the pandemic, Americans discovered, to varying degrees of astonishment, that you can have school without classrooms, work without offices, greetings without handshakes, a year without dentistry, Christmas without family drama, happy hours without getting hit on, and — in my case at least — Asian street food without Asian streets. It turns out that enduring the screams of competitive vendors at Gwangjang Market, Chowpatty Beach or the Omoide Yokocho is, well, optional. Great food on the go doesn’t come only from someone with a carved apple face in a dank alleyway, sentimental moments in "Parts Unknown" notwithstanding. It needn’t be ordered by shouting over honking horns or enduring interminable lines at a hawker market in blistering heat while crossing yourself with a bottle of Pepto.

This is a happy development, as Asia’s highways and byways have long cradled some of the world’s most fascinating eats. They’re cheap, unfailingly interesting, flavored by history and tradition, and beloved because they taste really good. There’s a reason why right now, millions of people all over the planet are spending backbreaking days on their feet producing it, and millions more are impatiently waiting for the chance to buy and eat it at communal tables.

And then there are people like you, spending hours on the crowded LIE waiting impatiently for the chance to eat in air-conditioned dining rooms. Is street food even possible for you? It is, thanks not to the Island’s streets but its kitchens, which have traveled to the Korean peninsula and the Indian subcontinent for you, back in time to French Indochina and Depression-era Japan, and forward to the trendiest streets of the Myeong-dong.

If you don’t find Koreans’ embrace of that lowly American invention known as the corn dog to be amusing, flattering and deeply troubling, then you haven’t visited the new kiosk at H Mart in Jericho, which offers 10 different versions of K-fun on a stick, each seemingly weirder than the last. Where you saw wieners battered and golden-fried, the Koreans saw opportunity both inside (subbing mozzarella, Cheddar or sweet potatoes for the dog) and out, rolling them in French fries or ramen noodles, then squirting them with sauces of various shades and flavors. Just as messy and even more popular is the centuries-old dish tteokbokki, a fine version of which may be found at Massapequa’s Korea-Japan mashup Spoonsticks, featuring penne-shaped rice cake noodles swimming in a sweet sauce of gochujang and brisket meat. The Korean fried chicken is on point too, as are the flat and teardrop versions of mandu, both dumplings raised to the next level by a kicky cabbage slaw.

It would take an entire article, and perhaps an entire book, to capture this country’s roadside riches, although happily many can be found on a single roadway here on the Island, namely South Broadway in Hicksville. The eponymous offerings at House of Dosas are what every crepe wants to be when it grows up — crispy, baseball bat-sized and loadable with an endless selection of fillings like masala, a life-changing amalgam of potato, onion, turmeric and cumin. But don’t miss the bhel puri — a puffed rice snack beloved in Mumbai for its encyclopedic array of flavors and textures — or the mango lassi, a refreshing yogurty milkshake that stands up to most any heat source. Nearby venerable chain Saravanaa Bhavan is blessed with its own innumerable street-wise delights, from vegetable curry accompanied by big, yeasty dinner rolls (pav bhaji), to positively addictive fried cauliflower tossed in a chili garlic sauce (Gobi 65), to chole bhature, a Punjab specialty featuring sweet and creamy chickpea curry here accompanied by a one-of-a-kind bread that’s Jiffy-popped into a deep-fried balloon.

Why not go full-on Manila and turn your home into a mini Quiapo market? Here’s how: gather some festive umbrellas, a couple of jeepneys to dodge, some pork knuckles …. Actually, go full-on Massapequa instead and score takeout from La Mesa, which has a whole section of its menu devoted to Filipino street food. There are skewered barbecued meats and lumpia shanghai, of course, wonderful little cigar-shaped spring rolls filled with juicy ground pork and accompanied by a sweet chili sauce, and the similarly shaped turonitos, a dessert treat filled with sweet purple yam and served with a decadent caramel sauce. The camaron rebosado proves that fried shrimp makes for a perfect walk-and-talk snack, especially when amped up with jalapeño. And no, I haven’t forgotten about the pork knuckles. La Mesa’s crispy pata, as it’s known, features a whole pig’s leg deep fried till crunchy, tender and a chicharron lover’s dream.

If there’s one breakout star of the streets it’s banh mi, a sandwich loved all over the globe for its seductive combination of sweet and sour, soft and crunchy, French and Vietnamese. It’s loved all over the Island too, and credible versions are equally widespread. But when chef Billy Dang — whose banh mi at Nicky’s in NYC’s Chinatown in the early aughts were legendary — decided to decamp for New Hyde Park, naming his new place Ha Long Bay, he brought with him vivid memories of the street carts of Hanoi, where he grew up, and a fervent commitment to high-quality ingredients. The pickled vegetables have real bite, the baguettes are crispy, and the 10 varieties of fillings don’t disappoint. Most start with a thin layer of paté over mayo crowned with meat (roast pork, chicken, roast duck) or non-meat (tofu, portobello mushrooms), including Dang’s Long Bay Special, created specifically for his new eatery. One bite and you’ll see why the ham-based banh mi is his most popular.

Hail a tuk tuk and head to Yaowarat Road, in Bangkok’s Chinatown, preferably at sundown, when food stalls seem to appear out of thin air, bringing with them the sweet and unmistakable fragrance of fresh-cut mango with sticky rice. Alternatively, save yourself a step and head to Bethpage, where the newish Theo Thai Bistro offers an authentic, heavenly and beautiful take on the simple dessert. If you’re the sort who typically opts for drunken noodles, pad see ew and other long-established kings of the street but thinks fruit and rice are best enjoyed separately, prepare to be amazed. Everything magically comes together thanks to sweetened coconut milk, whose warmth softens the rice even as creaminess moderates the mango’s sweetness. Plus, your tuk tuk doesn’t even have to leave the garage.

While a favorite all over the country, and indeed many points far distant, chapli kebab as we know it originated in the alleyways of Peshawar and environs, where the meat patties are still slid one by one into vast caldrons where they’re fried in deep pools of animal fat. From a distance they may look hamburger-esque, but it’s what’s inside — an unusual and happy combination of ingredients like pomegranate seeds and coriander — that makes chapli so special. Afghan Grill Kabob House in New Hyde Park does a superb job with both beef and lamb varieties, serving a trio of three-inch patties over basmati rice. As a bonus, and as you might expect, they serve a few beloved Afghan street foods as well, including bolani, bite-sized pillows of dough stuffed with pieces of potato, and the wonderful fried meat turnovers known as sambosas.

No Asian street survey would be complete without a trip to Shanghai, where they’ve been known to prick one favorite with straws, as otherwise that city’s venerated xiao long bao — you know them as soup dumplings — might end up on you rather than in you. Red Tiger Dumpling House serves a large selection of various shapes and sizes. Whether stuffed with crab-and-pork, shrimp or something else, you’ll find the dumplings dependably satisfying and conspicuously straw-less, making a visit to this Stony Brook eatery strictly AYOR. The same might be said for stinky tofu, a favorite often hawked at Taiwan’s night markets, effectively preventing its reek from wreaking havoc indoors. Less stinky than mildly malodorous is the tofu proffered at Eatery 19, a new Taiwanese restaurant in Syosset, but the spongy cubes dissolve on the tongue just as they should, making them a perfect foil for another street snack, Taiwanese sausage, which arrives authentically sweet, spiced and Vienna-sized (Hormel version).

There is nothing like the aroma of takoyaki on a crisp autumn evening in Osaka’s Dotonbori, where steam rises from iron griddles and evaporates into neon-fueled mayhem. Which stands to reason, as the octopus-laden street snack was created there in the 1930s and is still made the same way. Luckily, they’ve been making them the same way for decades at Kohaku as well: Egg-rich batter is poured into golf ball-size molds on a griddle, then quickly flipped with chopsticks, a feat of matchless speed and dexterity. The Huntington Station eatery’s octopus balls come out just as they should, with crunchy exteriors over melty centers. And the accouterments are spot on too — Japanese mayo, a dusting of bonito flakes. Close your eyes and you can almost see the cobblestones of Hozenji Temple glowing under paper lanterns.

Retired friends open coffee and pastry shop in Amityville
Pumpkin-shaped bagels and more fun fall treats to try
Halal chain opens second LI location, in Commack
Have eyeballs and bones in your dinner at this Halloween pop-up
Slovakia extends COVID-19 restrictions amid infection surge
4:20
Inside LI's top-rated restaurant on Yelp
Didn’t find what you were looking for?