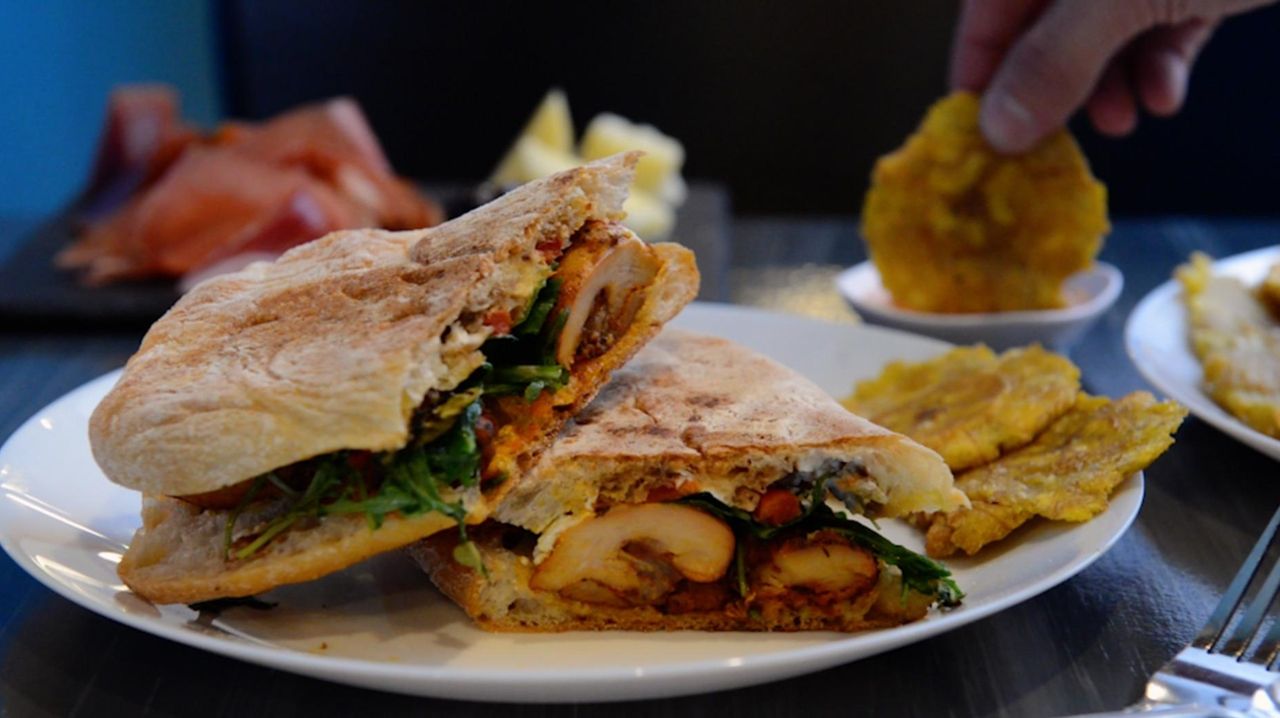 Alan Gotay, a former professional boxer who has opened Babalu, a Cuban restaurant in Huntington, spoke about how training for the sport helped him become a restaurateur on Thursday, June 8, 2017. Credit: Daniel Brennan

SERVICE: Warm as a Havana summer

The image of Ricky Ricardo adds to the humor, irony and openhanded style of Babalu, the name of the fictional bandleader’s signature song on “I Love Lucy.”

The incomparable Desi Arnaz’s character was an introduction of sorts to Latinos for many American viewers when the classic TV show co-starring Lucille Ball debuted in 1951.

Babalu sports sea-blue hues, lively background music, a kaleidoscopic mural of Cuba scenes and vintage cars, and, of course, tongue-in-cheek references to the black-and-white sitcom world of Lucy and Desi, if not Fred and Ethel Mertz.

Cuban fare has influences as varied as Spanish and African, Arabic and French, Portuguese and Caribbean, Aboriginal and Creole.

The tasty combo plate of guava, manchego cheese, fig jam and Serrano ham is worth sharing while you make decisions. Dip bread into the house-made parsley oil and the olive oil from The Crushed Olive on Main Street.

Babalu sings with standout ceviche of tuna with avocado and fine octopus glistening from a lemon vinaigrette. Grilled scallops, however, arrive nearly dessert-sweet. Instead, try the spice-rubbed chicken kebab with a more restrained pineapple salsa. Empanadas packed with picadillo, or seasoned ground beef, are just dry.

The Cubano sandwich is served on pressed ciabatta rather than the traditional, long, baguette-like loaf. And a too-generous slathering of house-made mustard overwhelms the union of ham, roast pork, Swiss cheese and pickles.

Another sandwich, the Hemingway, highlights spice-rubbed chicken thighs. Papa’s favorite was peanut butter-and-onion on white bread, so Babalu’s tribute definitely is an improvement: It was good and strong and noble, good as the last matador in the hard sun of the dying afternoon.

But Papa might have enjoyed the blunt ropa vieja even more, first-class shredded beef with something to declare, savory and true. And he’d go for the slow-roasted pork shoulder, or pernil, which gets a boost from overnight marination, plus root vegetables.

Bacalao, here cod prepared sous vide, is the big catch. Fillet of red snapper, with red beet beurre blanc, shows up more dulcified than the roasted sweet plantains. They’re excellent, and obligatory, on the side of any main dish.

Babalu’s tostones, or crisp, twice-fried slices of green plantain, are mandatory, too. But you can skip the forgettable roasted cauliflower gremolata in favor of some extra avocado.

Since there have been plenty of sweet accents by now, you could easily forego dessert. The hazelnut bread pudding defines pastiness, and the guava cheesecake will challenge your sugar levels. The Cuban flan is best, but brace yourself for the rush of sweetness.

Chocolates might be an apropos finale at Babalu. And the mouthfuls could be served unwrapped.

Lucy and Ethel definitely would approve.