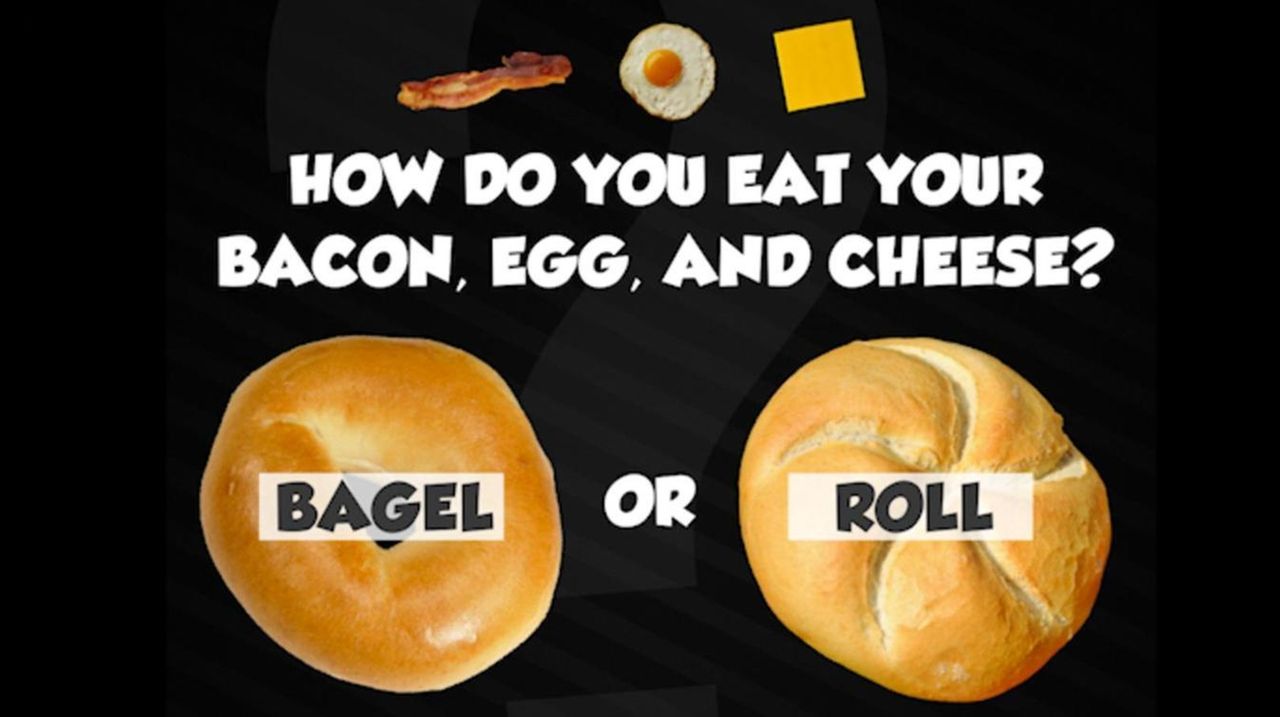 On Feb. 9, Long Islanders weighed in on how they prefer to eat their bacon, egg and cheese sandwiches. Credit: Newsday / Gabriella Vukelic

A few steps from the busy Mineola LIRR station, a commuter in an overcoat and earphones stares hard at the menu board at the Station Plaza Coffee Shop & Diner as co-owner Peter Vatakis waits with a pad. “Two eggs, scrambled, and ham, on a roll,” the customer finally says. “Can you add tomato?”

“Sure. You want salt and pepper, ketchup?” The man nods, and the order disappears into the back, where the grill hisses and steams. A few minutes later, the order appears, tightly wrapped in foil and wax paper: A toasty-warm sandwich with oozing golden innards and the tang of cured pork, melded together in timeless harmony.

We may have some of the most frenetic, fast-paced lives in the country, but Long Islanders are blessed with a practically endless supply of bacon, egg and cheese sandwiches (aka BECs) to keep us going, cheesy buoys of all-day sustenance constructed to withstand train rides, car commutes, and any other kind of rushing we get up to in the morning. Deceptively simple at first glance, BECs have almost infinite possibilities, and that decision making begins the moment you order one: How would you like your eggs cooked (scrambled, over-easy, even baked)? What kind of cheese (American, usually) and meat (bacon, usually) would you like, and are you gonna have ketchup on that, and salt and pepper? And, most importantly, will that be a roll, bagel, or English muffin?

The structural integrity of a BEC owes much to its default bread, a sturdy poppyseed-showered kaiser roll, and how and why the BEC become the lingua franca of Long Island mornings is enmeshed with the history of those hard rolls. These 18th century crisp-on-the-outside, airy-on-the-inside baked wonders migrated to New York, just as bagels did, via Jewish bakers — namely Charles Louis Fleishmann, a former Vienna resident who debuted hard rolls at the 1876 World’s Fair in Philadelphia and later launched mass production around New York, including on Long Island. (He is also the guy who founded Fleischmann’s Yeast).

“Sausage and eggs on a roll,” said Guy Wolynski simply while waiting for a train in Mineola that same early afternoon. Wolynski, who works a later shift on the LIRR and so has his sandwich in the afternoon, did not elaborate. “Must be a slow news day,” he called to a reporter (me) as he ran for a train.

Wolynski might be in the minority when it comes to BEC simplicity. “I’m a ham, egg and Swiss guy, with a little hot sauce or ketchup. Eggs scrambled or over easy — depends on how messy I want to get,” said Marc Warner of Medford, who also helps administers a Facebook page called Long Island Foodies and so thinks about food a fair amount. If Warner chooses the bacon route, he has another requirement: It better be crispy. “So many places, the bacon falls short of expectations and I’m left wanting a better sandwich,” he said. Some might agree that floppy or tough bacon has ruined many a BEC.

Tisa Cassidy, a freelance photographer and production coordinator from Huntington, adores the BEC on a Cheddar biscuit at Kerber’s Farm (also in Huntington), but doubles up on pork for another of her faves, eggs, ham, bacon, melted Cheddar and avocado from Gabby’s Gourmet Bagelatessen in Woodbury. “They are really good at having my cheese perfect,” wrote Cassidy in a text. She’s thoughtful about how her BEC will travel. “I ask for my eggs over-medium. So it’s a little drippy, but not too messy.”

At Ruland Road Deli in Melville, there are at least 14 variations listed on the chalkboard menu. “We sell 200, 300 a day,” said co-owner Matt Garry, who started the deli with his brother, Tom, two decades ago. For most of that time, one of the most popular combos has been the R.K., named for an early customer: Eggs, bacon, cheese and potatoes on a kaiser roll for $6.50.

At Southdown Coffee in Huntington, owner Mark Boccard said their twist on a classic BEC, called the Famous, “came together randomly.” The sandwich was first offered with modular choices, from cheese to meat, and only on the weekends. “We were experimenting with possible toppings, like pickled onions, and we initially just had a lot of options and people were like ‘I’ll take everything.’”

That “everything” includes eggs from a Kings Park farm, Cabot Cheddar, Niman Ranch bacon, arugula, tomato butter (from a Boccard family recipe) and, perhaps most saliently, a roll baked especially for the task by nearby Buttercooky Bakery.

Sort of like the Force, the web of BECs that surround us is always ready to be tapped at will, and in myriad forms. Let us count the ways.

SOME OF LONG ISLAND'S BEST

#10 at the Parkway Delicatessen (1045 Willis Ave., Albertson): There’s usually a line at this narrow, classic wood-paneled deli, but a battalion of sandwich makers keeps things moving. The #10 derives its charm from fluffy soft-scrambled eggs, two flaps of ham and a sheath of melted American cheese that becomes the flaxen glue holding the entire thing together. Served on a toasted, butter-slathered English muffin, it decidedly more than the sum of its parts, and crumbles gently into your mouth as you eat. And it’s $3.29! More info: 516-747-5540

The Famous at Southdown Coffee (210B Wall St., Huntington): This is like the Rita Hayworth of breakfast sandwiches: Classy but still a little bit naughty. Consisting of two scrambled eggs (from Raley’s Farm in Kings Park), crispy Niman Ranch bacon, Cabot Cheddar, a tuft of shredded arugula and a smear of both tomato butter and jam, it is wedged into a floury Portuguese-style roll baked especially for the task. The sandwich ($8) has all of the fatty hallmarks of yesteryear with the nouveau stylings of 2020 — and it’s only available in the Huntington location. More info: southdowncoffee.com

Egg sandwich from Salumi Bar (5600 Merrick Rd., Massapequa): Most diners may know the inside of Salumi’s rustic barroom, especially if they love wine; next door, though, is an all-day café with plenty of seating and a solid egg sandwich (starting at $4) of free-range eggs served on a on a luxe brown-butter house roll. The cheese choice is slightly offbeat — Havarti or Gruyere — and pork options include bacon, sausage or shaved truffled ham. A blend of over-easy eggs, ham and melted Gruyere pretty much mimics a croque madame, but more compact and easy to maneuver while, say, driving on Merrick Road. More info: 516-620-0057, salumibarli.com

Pastrami egg melt at Railroad Bagel Express (126 N. Carll Ave., Babylon): Grabbing a sandwich from a deli to eat on the train into the city is a Long Island rite, and this busy bagel spot (right across from the Babylon LIRR station) abides with this BEC-pastrami sandwich mashup ($5.49): Grilled Boar's Head pastrami with eggs (go for over-easy), melted American cheese and a veil of grilled onions on a roll or, better yet, chewy everything bagel. More info: 631-482-9777, railroadbagelexpress.com

Two eggs, American cheese and kielbasa on a roll from North Road Deli and Caterers (46520 County Road 48, Southold): Owner Rick Palumbo has been baking his own bagels and rolls each morning for over 20 years, and it’s what makes a BEC (starting at $4.75) from this Southold deli a particular standout. “We do things old school,” said Palumbo, and that includes sourcing a high-quality, robust kielbasa for a Polish spin on the BEC. More info: 631-765-4110

Scrambled eggs, American cheese, grilled roast beef and onions on a kaiser roll (off-menu — ask for it) at the Ruland Road Deli (89 Ruland Rd., Melville): I mean this in the best possible way: If you grew up eating chipped beef on toast (as I did, occasionally), but craved it for breakfast (not lunch) but in a more sophisticated, sumptuous way, this is the breakfast sandwich for you. Flaps of warmed roast beef meld with melted American cheese, aioli and a tangle of onions in a savory bundle so warm and oozy that the first half is gone in a flash and you briefly ponder saving the second half but … well, you can’t. I don’t want to think of the calories — but more virtuous eaters can look to this deli’s “new year, new breakfast” menu, which draws on things such as egg whites, turkey sausage and avocado. More info: 631-249-3354 , rulandroaddeli.com