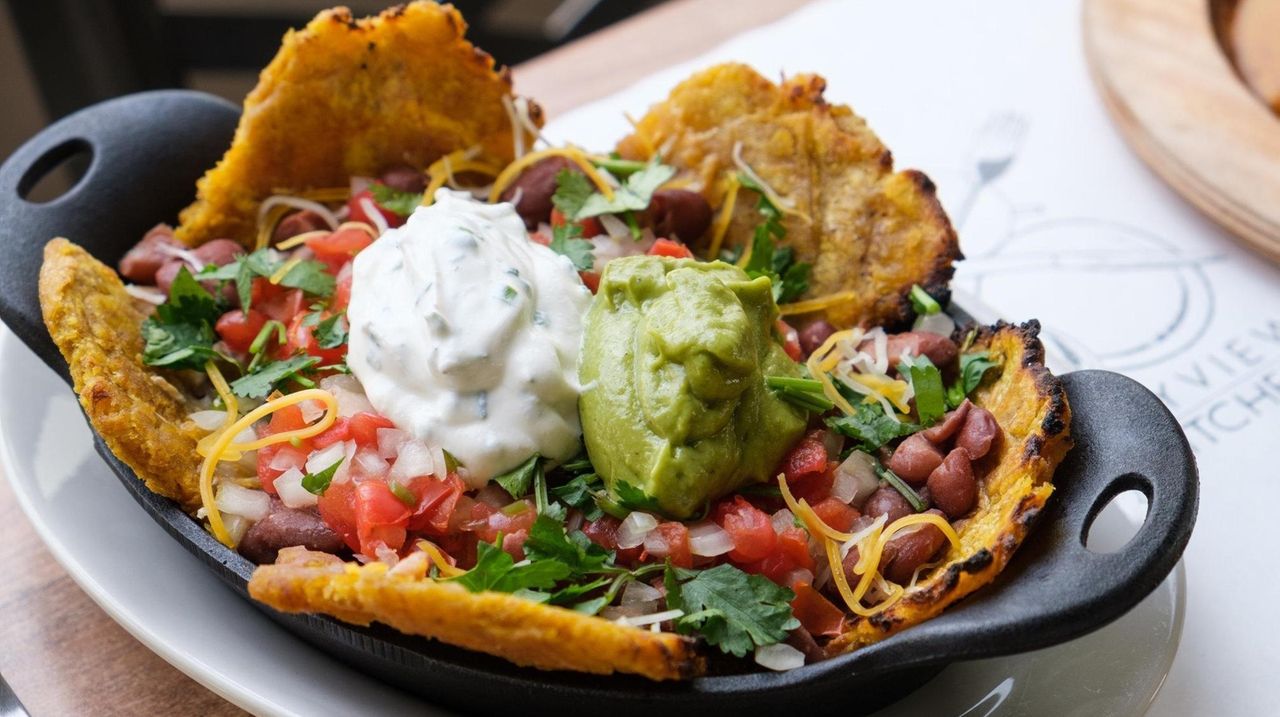 Bayview Kitchen, a new eatery in Amityville, brings Caribbean flavors to comfort food staples. On Oct. 25, chef / owner Antoine Reid talked about how he got his start and what you can expect at his restaurant. Credit: Daniel Brennan

If 23andMe ever gets around to producing ancestry reports for food, I suggest they start with a dish called what-a-jerk shrimp and grits, whose DNA is traceable, at a minimum, to Jamaica, the South Carolina Lowcountry, east Africa and lots more places I’m not thinking of. Out of these very good culinary genes, chefs Antoine Reid and Asim Henry have concocted more than a mere morning menu item at their Bayview Kitchen in Amityville. It’s the most rousing breakfast for miles in any direction.

The kettle it’s served in resembles a miniature version of something the witches gather around in “Macbeth.” In place of eye of newt and toe of frog, however, you get sizable shrimp, plump and pink, peeking out of a thick tan broth of obvious passion. Diving into it, your spoon is ensnared by strings of cheese both thick and thin on its way to the pearlescent, sedimentary grains below. Grits is the wrong word for something so smoothly textured, nutty flavored and absent all grit. In my case, they tempered the salty broth and enhanced the bite of the shrimp.

Owner Reid is a first generation American of Jamaican descent (“we liked sushi and fast food, things our parents had never heard of,” he told me), and you get the sense that the menu, which accordingly straddles and fuses, is an attempt at keeping multiple constituencies happy. How else to explain his Not So Nachos, which substitute plantain chips for tortilla ones, and add red kidney beans to the standard cheese-pico-guac topping. The result is something so healthy-scrumptious you’ll forever look on standard nachos with suspicion. (Fried corn chips? Why?)

Equally delicious, if not quite as healthy, is Bayview’s okra appetizer, in which the pods are battered with cornmeal, fried whole, and plagued by none of the usual greasiness. The same goes for the codfish empanadas, which don’t appear on the regular menu but ought to. Bayview even finds a new path to deliciousness for chicken wings. According to Reid, they are marinated for at least 12 hours before being roasted and then finished in the fryer. Of the four sauces in which they might be tossed, by the way, it’s the barbecue one flavored with sorrel, the Jamaican name for dried hibiscus flowers, that really makes these wings take flight. Ahem.

“We call it Knew Age American Caribbean fusion cuisine,” said Reid, using a collection of words that stand together nervously, like strangers asked to do a trust fall. Far better to let the food speak for itself, as in the case of the salmon and quinoa salad, whose monumental presence might be repurposed as an eagle’s nest with little effort. In the middle sits a nice plank of fish seasoned liberally with a butter sauce enlivened by chiles, cinnamon, garlic and more. Perfectly cooked, it doesn’t so much melt in the mouth as evaporate. The same is true of the steak and eggs of Bayview’s Big Poppa, which in addition to being perhaps the finest breakfast selection ever named for a Notorious B.I.G. song, is sort of notorious itself, thanks to what Reid calls a Caribbean chimichurri, a term that I believe is Jamaican for let’s burn some mouths. Out go the jalapeños, in come the scotch bonnet peppers, with their fruity flavor and serious heat, the dish won't so much jump-start your morning as defibrillate it.

By day, the cozy 48-seat dining room is cheerfully flooded with sunlight, its tranquil vibe marred only by three gigantic TVs gawking from above. Nighttime brings a party atmosphere, Rastaritas (cranberry-flavored margaritas, a house specialty), and the amusing sight of Generation Z-types wresting control of the zeitgeist from helpless millennials. It all makes for entertaining dinner theater for those of us long in the tooth. We drag tails-on shrimp through a seductive coconut curry sauce, flashing schadenfreude smiles all the way.