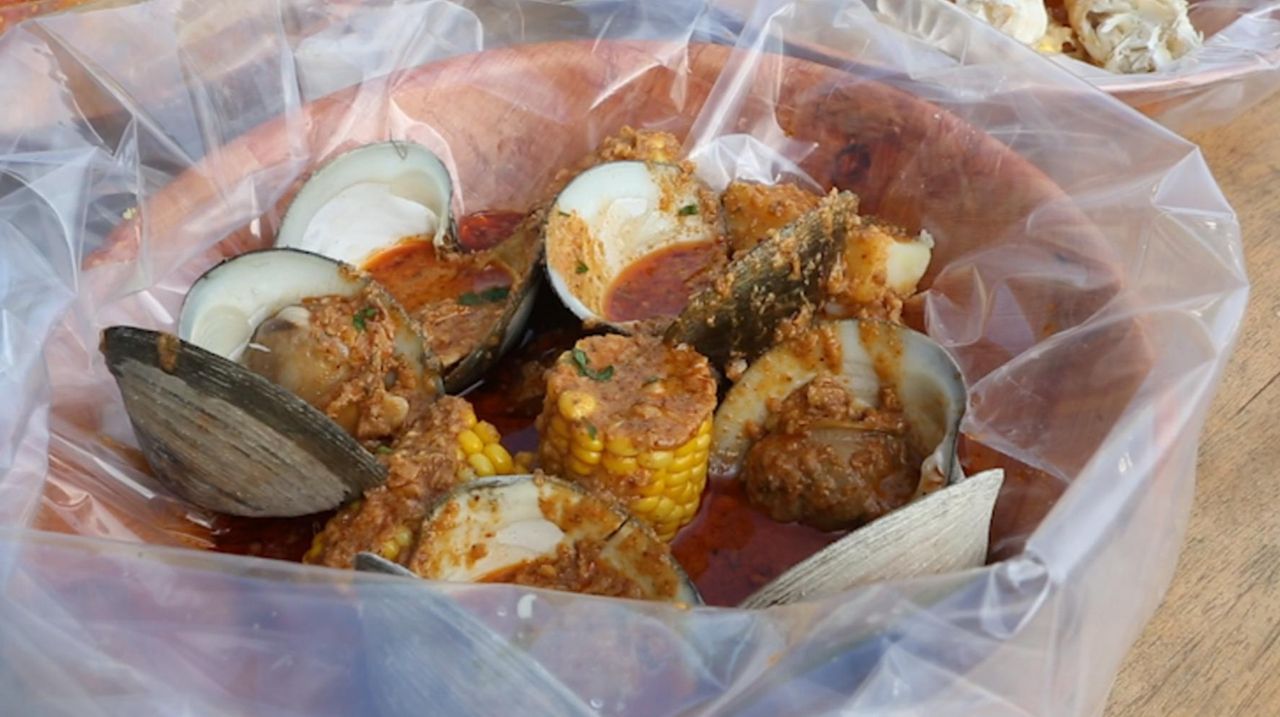 Seafood arrives Louisiana-style at Ben's Crab in Oceanside, as seen on Friday, Sept. 1, 2017. After falling in love with Cajun-style food, chef Linna Tanuhardja was inspired to bring those flavors to Long Island and opened Ben's Crab, serving up shellfish tossed in a range of sauces geared to the seafood lovers.    Credit: Linda Rosier

AMBIENCE: An odd and yet wonderful two-story space, an old Asian-fusion restaurant that has kept its eclectic bones but is now dressed with fish nets and other nautical knickknacks.

ESSENTIALS: Open from 4 to 11 p.m. Sunday to Thursday, 4 to 12 p.m. Friday to Saturday. Parking lot, wheelchair accessible, outside seating

On a major thoroughfare in Oceanside, an Indonesian immigrant who fell in love with the American seafood boil has appropriated a version from Louisiana. It arrives, ceremoniously, in a plastic bag.

It’s a delicacy in certain parts of the South: boiled seafood, corn and potatoes tossed with some combination of garlic and fiery spices.

At first, the presentation at Ben’s Crab seems like an unnecessary way to serve seafood in a part of the country that is used to ordering a stock pot that’s dumped on a paper-lined table, or straight from a sand pit on the beach.

Open the bag, and you’re first met with a spicy fragrance and expertly cooked shrimp, crab, clam, lobster or crawfish. The requisite corn and potatoes are more of an afterthought.

This Cajun version is what Linna Tanuhardja decided Long Islanders are missing.

Tanuhardja, who moved to New York from Indonesia 15 years ago, first experienced the seafood in a bag in Los Angeles at the casual chain restaurant Boiling Crab. This led to a trip to Louisiana and years of experimenting with recipes.

Three months ago, she teamed up with her fiance, Nico Falindeho, and two other partners, to launch Ben’s Crab in the free-standing space that once housed the Asian Fusion restaurant Unique.

It’s an odd and yet wonderful two-story space that has kept its eclectic bones — marble stairs, recessed lighting and neon accents. For Ben’s, it has been dressed with fish nets and other nautical knickknacks. The cushioned chairs remain, but diners saddle up to paper-covered tables topped with red checker food boats and plastic ware. On a recent evening, a smooth jazz soundtrack was paired with Adam Sandler’s Louisiana-centered “Water Boy” playing on the flat screen TV.

To navigate the menu, you’re going to need a battle plan. The appetizers outside of the soft shell crab basket are forgettable. A lobster roll comes with overcooked meat that is tossed with an excessive amount of black pepper. The batter on calamari is chalky. Crabcake sliders come on stale buns.

Instead, stick to the boils, and make sure to order a beer. This is why you’re here.

First you’re going to have to make choices. Start by picking your seafood: crab (Dungeness, king and snow), shrimp, lobster, head on shrimp, crawfish and clams or some combination. Then pick a sauce — garlic butter, Old Bay, ragin’ lemon pepper or a combination of all three dubbed Ben’s Crab Special Cajun Blend.

Finally, choose a level of spice, ranging from none to medium, spicy and fire, each delineated by the number of hot peppers on the menu. (Fire means three.)

It’s hard to go wrong with just about any combination, but the garlic butter and Ben’s Crab Special generally do better.

Tender cherrystone clams pair well with garlic butter and spicy seasoning. King and snow crab legs are married expertly with Ben’s Crab Special Cajun Blend and the medium spice, allowing the sweetness of the crab to shine. Seasonal crawfish are not bad with Old Bay and spicy.

Perfectly cooked lobster works well in a combo of garlic butter and spicy, but crawfish do not, arriving overcooked. Instead ask for head-on shrimp, a substitution that is not mentioned on the menu, but one that waiters will offer.

The festive spectacle comes with its own buildup. Moments before the seafood arrives, a waiter places a metal pail bucket in the middle of the table, from which he begins handing out nut crackers and a pick indicating that to eat here is going to require some manual labor.

A plastic bib is knotted around each diner’s neck. Disposable gloves are optional. You want them. Napkins do no good. You’ll go through many in a single meal.

Soon after, the bags arrive, nestled in wooden bowls. Don’t be shy to use your tools. To get the most out of your boil, share.

Just know, a first date place this is not.