The year 2020 will be remembered as the one in which almost everything changed, and nowhere were those changes more dramatic and disruptive than in the dining scene. That was true not only for the restaurants and the many whose livelihoods depended on them, but anybody who loved eating out, whether for sustenance, pleasures of taste, convenience, entertainment or escape from their own cooking. For better or worse, COVID-19 altered — how, where, what, when — practically every aspect of every food experience. Here are some of the most memorable ones our critics had in a year of dining: the best things we ate, the best places we ate them, the best ideas born of the worst of times and more.

The closest I came to Italy was at Osteria Umbra in Smithtown. The restaurant, which opened in September, marked the return of Marco Pellegrini, the Umbrian-born chef who presided over the kitchen at the three-star Caci North Fork in Southold from 2014 until it closed in 2018. All of Pellegrini’s greatest hits are back for an encore, from a Caprese salad topped with basil sorbetto to taglierini with lobster and Sorrento lemon, but, in Smithtown, the chef has a new toy to play with: a massive wood-fired grill-rotisserie, where slowly revolving birds and beasts lend their drippings to waiting pans of vegetables directly below. Which brings me to the roast suckling pig I enjoyed during a leisurely lunch on the patio. Each helping included some ribs, some shoulder and some hind leg, everything burnished to shades of russet and gold with charred bits of skin and resting on a puddle of meaty elixir. More info: 631-780-6633, osteriaumbra.com — Erica Marcus

For all that was lost during 2020, we also clocked some gains. Among them was a handful of new Caribbean-food spots cooking the kind of fragrant, soul-mending food we all needed — including jerk chicken swirling with allspice, ginger and pulsating habanero heat. At One Bite Jamaican Restaurant & Bakery (175 Bay Shore Rd., Deer Park, 631-940-9900), opened in Deer Park this summer, the bird is fall-apart tender with bits of blackened skin all over; at Blackbird (3026 Merrick Rd. Wantagh , 516-654-9200, blackbirdli.com), a sturdier jerk chicken over jasmine rice was one of chef Chris Perrotta’ early takeout triumphs.

Lost At Sea (888 W. Beech St. Long Beach, 516-632-5263) is primarily a seafood place you come for tricked-out crudo and excellent cocktails, so it feels slightly out-of-place to be scraping molten fat from the inside of a roasted cow leg and smearing it on charred bread. Yet this is a primal year if ever there was one, and this pandemic-season activity is somehow life-affirming in the way that hunter-gatherers drew strength from eating the hearts of their prey. Chef Alecia St. Aubrey’s version gets hits of brine from anchovy butter, and zip from a spritz of charred lemon. — Corin Hirsch

Mogu Modern Chinese Kitchen in Farmingdale, the first in what its owners hope will be many locations, is reinventing Chinese-American takeout. There are no woks, no deep fryers. All the cooking is done either in a patented, computer-operated, nonstick wok simulator or, as in this bruiser of an egg roll, in an industrial air fryer. Most egg rolls of my acquaintance contain a cabbage-heavy hash in which I might be able to identify the odd bit of pork or shrimp. Mogu’s is stuffed with big chunks of king oyster mushrooms, tender steak and lots of leeks. Air-fried though it was, I can’t imagine a crisper crust. More info: 631-257-3831, moguchinese.com — Erica Marcus

I was among the last people on the planet who hadn’t tried the fried whole-belly clams at the iconic Rockville Centre shack. Unlike the clam strips typically found elsewhere, the Ipswich variety is briny and oyster-like, I learned, and as worth seeking out now as they were in 1939, when Bigelow’s first began importing them from New England. Like every other eatery on the Island this year, the venerable clam shack was confronted with challenges not faced since its inception, but the tenacious Andreolas family, who’ve owned the place since 1991, refused to give up, installing a charming outdoor patio complete with its own Huckleberry-Finn-meets-Pleasantville picket fence. Bigelow’s was a powerful reminder of the way we were, and will be again. More info: 516-678-3878, bigelows-rvc.com — Scott Vogel 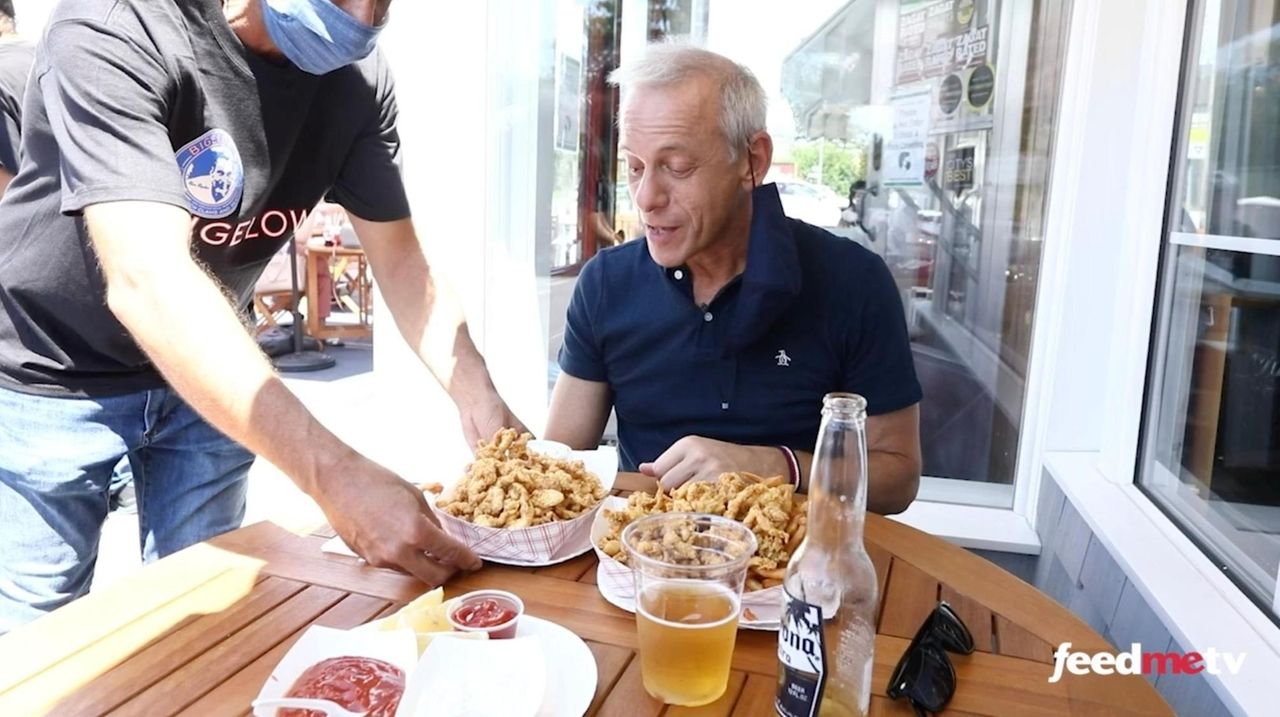 For 43 years, King Umberto has been serving pizza, pasta and Parms of the highest caliber in Elmont, first at a modest pizzeria and then in a sprawling establishment that also encompasses a fine-dining restaurant furnished in old-fashioned white-tableclothed comfort. The pandemic saw the establishment of yet another space: A vast, transparent pavilion with glittering chandeliers suspended from its vaulted ceiling and roll-up garage doors for walls. The "room," 40 by 150 feet, accommodates 150 diners and looks out onto a landscaped patio. All of this, plus King Umberto’s brisk takeout business, means that no one in South Nassau needs to forgo its fried capellini balls, eggplant rollatini, penne alla vodka, veal Francese and chicken Parmesan or the superb wine list full of well-priced Italian treasures. More info: 516-352-3232, kingumberto.com — Erica Marcus

The more things changed, the more we longed for things that hadn’t. Chef Michael Rozzi’s cooking at 1770 House in East Hampton has never been less than impressive, but the consistency of both the kitchen and the dining experience resonated in ways they hadn’t before. Not that there weren’t changes, of course. The menu slimmed down to a prix fixe effort that offered just four choices for every course. But the Montauk fluke tartare was still there, as ineffably delicious as ever. And while 1770 still meant dining in the Hamptons ("Look, it’s Don Lemon at the next table!") and could be pricey in the extreme, the service was unfailingly top-drawer, the dining room comfortably luxurious. Meanwhile, dinner on the back patio was, in a word, unforgettable, a triumph of fairy lights and sensibly spaced tables on the lawn. On the other side of 1770s gates, chaos reigned supreme, but within them was a menu and experience you could still count on. More info: 631-324-1770, 1770house.com. — Scott Vogel

After spending months under house arrest in my own apartment, I was desperate to recapture whatever enchantment summer might still possess. And yet the Salt Shack in Babylon was the last place I expected to find it. What was it, after all, but a sprawling, multilevel concession stand whose defining feature was a bank of frozen drink dispensers lined up like washing machines? Well, for one it was just steps from Cedar Beach, its large patio area littered with dozens of deck chairs right on the sand. For another, there were party lights, a laid back vibe and live music emanating from a ramshackle stage. But what finally sold me were Cedar’s sunsets, glorious explosions of orange and purple that proved a perfect antidote to the COVID-19 blues. More info: 631-422-7222, saltshackny.com — Scott Vogel

The year turned us all into Cinderellas, teasing us with nights of surprising magic that were over all too quickly. My favorite even involved a castle. Almost exactly 100 years since the first wedding was held at Huntington’s Oheka Castle, Otto Kahn’s sumptuous Gold Coast mansion flung open its doors to plebs in September in hopes of bringing in some revenue after almost all of its big events were COVID-canceled. Elegant tables sprouted on the castle’s terraces and in formal garden areas, bringing dazzling al fresco dining to its upscale OHK restaurant for the first time. Equally charming was Otto’s Courtyard, a cute pop-up eatery in yet another part of the castle ordinarily enjoyed only by bridal parties, in which umbrellaed tables were scattered over a white pebbled courtyard and terrace, the latter with matchless views of the Oheka grounds. Best of all was Otto’s convivial biergarten vibe assisted by chef Chris Cappello’s German menu. And then suddenly, the ball was over, the carriage turned back into a pumpkin, and the courtyards and gardens and terraces of Oheka fell silent, the mansion having gone into hibernation until spring, when its focus will presumably return to private events. Still, the glasnost moment was enormous fun while it lasted. More info: 631-659-1400, oheka.com — Scott Vogel

There was nothing usual about tasting wine out east this year, but the staff at Wölffer Estate Vineyard in Sagaponack managed to turn a tightly controlled activity — reservations only, traffic flow markers, staff escorts — into a luxe experience via peerless service and scattered lounge areas on an outdoor veranda overlooking the vineyard. Because winemaker Roman Roth was busy releasing unusual varieties this year, such as trebbiano and skin-contact semillon (plus a growing roster of rosé), a visit here pampered the senses on multiple levels. More info: 631-537-5106, wolffer.com — Corin Hirsch

What we hope stays post-pandemic

It was the silver lining of the great storm clouds of spring 2020: The state permitted restaurant and bars to sell beer, wine and mixed drinks to go alongside food items. In what seemed like minutes, canned old-fashioneds, bottled negroni and pitchers of margaritas appeared on the takeout scene, much to everyone's relief and delight. Entire downtowns (looking at you, Northport) became festive street scenes at the weekend, or as much as they could during distanced 2020. Is it here to stay? Let's hope so.

Diversifying revenue streams was key to survival this year, and some restaurants realized that some of their latent value resided in the singular condiments, noodles or dips that compel return visits from customers Tullulah’s in Bay Shore (631-969-9800, tullulahs.com) launched a charming market selling canned cocktails, pumpkin-seed pesto and pickles, among other morsels, while Pentimento in Stony Brook (631-689-7755, pentimentorestaurant.net) transformed its dining room into a market selling salumi, artichoke spread, and homemade pastas and sauces. We want it all, and we want more of it, too.

The decked-out patios, fern-lined tents, cozy igloos and enchanted greenhouses that have sprung up across Long Island like an alternative al-fresco universe. With fire pits, blankets and steely determination, we seem poised to make this a winter of sidewalk lunches and stylish parking-lot dinners.

As the restaurant business contracted, so too did the businesses that supply them: All of a sudden, food wholesalers were woefully short of customers. Thankfully for the home cook, a number of the area’s premier restaurant wholesalers pivoted to serve the general public. Baldor Specialty Foods (baldorfood.com), one of the Northeast’s largest wholesale importers and distributors of fresh produce and specialty foods, will deliver Siberian caviar, a whole foie gras, Castelfranco radicchio, pomegranates and pretty much anything you have ever eaten in a restaurant. Copiague's Gra-Bar Fish (516-876-0441, grabarfish.com) is making dozens of fresh seafoods available for pickup and delivery. There’s also a growing selection of ready-to-cook dishes. The long-standing wholesale butcher Main Street Meats (516-249-8200, farmingdalemeatmarket.com) is now offering its entire inventory, from value items to prime dry-aged beef, for pickup and delivery.

The biggest LI restaurant closures of 2020The year saw the shuttering of several eateries as restaurants faced mounting challenges amid the coronavirus pandemic.