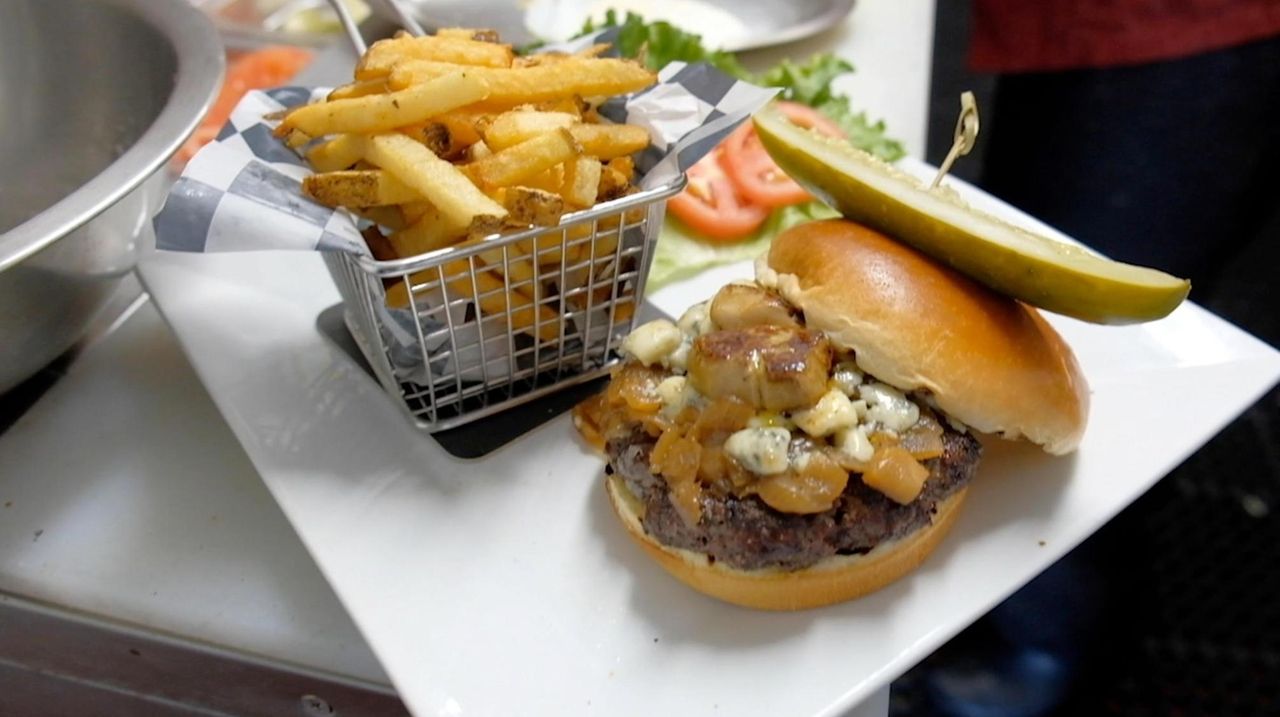 ESSENTIALS: Open Monday to Saturday for lunch and dinner from 11:30 a.m.; Sunday brunch from 10 a.m. to 3 p.m., and dinner from 3 to 9 p.m. Street parking with a small back parking lot; wheelchair accessible; credit cards accepted.

What’s in a name? When it comes to “kitchen and cocktails,” the suffix for plenty of places that have opened in the last year or so, it can be a puzzler. Diners usually hope there’s a kitchen making their food. “Cocktails” signal some sort of boosted cocktail game.

At Blue Goose Craft Kitchen and Cocktails in Patchogue, the reincarnation of KB’s Burger Shack on West Main Street, the cocktail DNA should be strong. In 1934, when John’s Bar & Grill opened here, it was issued the first post-Prohibition liquor license in Suffolk County, and a succession of bar and grills have operated here since.

However, there is no cocktail menu at Blue Goose Craft Kitchen and Cocktails. On a recent night, the sole cocktail special was ginger ale and flavored vodka. There’s still plenty of beer, though (11 taps’ worth), as well as wine and liquor, plus a bank of flatscreens filled with sports matches and Quick Draw.

When owner Brian Kearns reinvented  KB’s Burger Shack last fall, he renovated both the barroom and an adjacent dining room to a comfy, nautical ambience, a palette of blues and whites with shabby-chic touches. Out of the gate, the kitchen was run by chef Chris Zullo, the original chef at Brewology in Speonk; Zullo has since left, but his tavern-food menu remains, a roster heavy on burgers (well, there are three) and punctuated by things such as lettuce wraps, deviled duck eggs and a hickory-smoked pork chop.

The burgers are still where it’s at, including a luscious baseline version, the 27A, a two-fingers-thick patty with melted cheese of your choosing on a toasted, glossy brioche bun. It comes with a basket of floppy handcut fries, bits of skin clinging to their edges, for a stealworthy $12. Its more complex cousin, the Goose Signature burger ($18), is accessorized with Stilton cheese, onion jam, and a hint of foie gras. These elements are held in restrained balance, making this potentially overcomplicated burger quite delicious. And Blue Goose does vegetarians right with a crunchy, nutty kale-quinoa burger irrigated with aioli, hearty without being heavy.

The rest is uneven terrain. Oysters on the half shell (Blue Points, we think, but the server wasn’t certain — service here is sweet but sometimes ill-informed) were plump and fresh on one visit, delivered with a zesty orange mignonette; a few weeks later, they were thin, thrown akimbo on a platter without an oyster fork, and the mignonette was murky. Inventive calamari “fries” of pulverized baby squid shaped into crispy breaded fingers were chewy but highly snackable. Lettuce wraps, floppy green leaves that you can fill with snappy, gingery shrimp (or chicken, if you prefer) exuded subtle heat. Oysters Rockefeller, a special, were melty bomblets of oyster meat, bacon, spinach and Parmesan.

However, pork belly tacos, while generously stuffed, arrived on cold tortillas, the belly crisped on one side but dressed too sweetly; a layer of bean puree added mushy texture but little else. Baked clams (another special, and one beloved at KB’s Burger Shack) were all breadcrumb excavation with little reward. Deviled duck eggs sported perfect rosettes of creamed-up yolk dusted with bacon and parsley, but were overly firm and blunted from an extended stay in a cold place. A bowl of mussels came in a cream sauce that was too cool when it arrived, so it rapidly clumped up.

Besides those burgers, the best of the main courses was a killer “catch of the day,” a monkfish filet over perfectly cooked couscous threaded with red peppers and baby carrots; the top of the filet was seared to copper, then dolloped with an almost silken saffron cream sauce.

Stepping down from there, “steak three ways” (a strip steak on one visit) was almost singed but still tender, and came with a superb chimichurri (as well as steak and blue cheese sauces) by its side. A giant smoked bone-in pork chop had any remnants of flavor smothered by overly sweet cherry glaze and even sweeter mashed butternut squash beneath. Both pastas, a “wild mushroom” gnocchi tumbled with spinach, button mushrooms and crumbled sausage, and another of garganelli cut with shrimp in a lobster cream sauce, landed on the palate like bricks. And fish and chips involved lots of cod, albeit breaded to a sandpaper finish on the outside, parched on the inside.

In its newest incarnation, this century-old building is still a solid spot for a very good burger and maybe a beer, with the rest a work in progress.