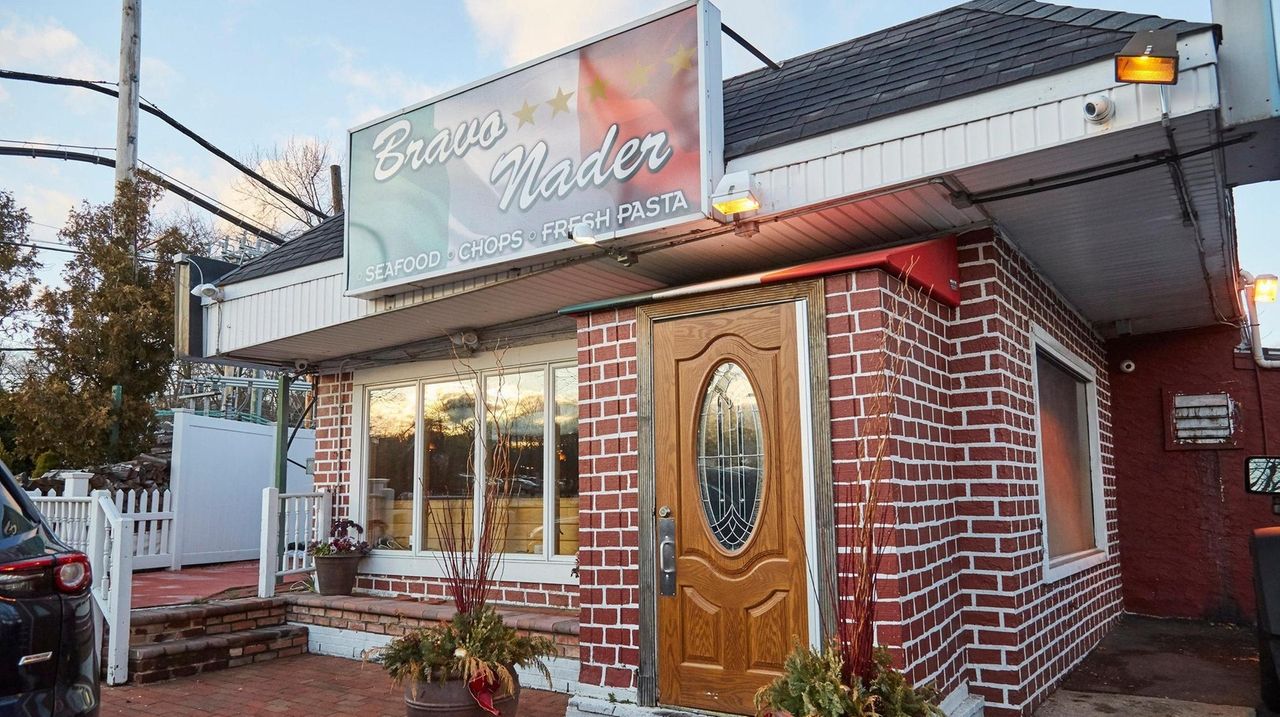 Nader Gebrin, who has been the owner of Huntington's Bravo! Nader for over two decades, talked about his culinary background and his love of fish. Credit: Yvonne Albinowski

SERVICE: Warm, efficient and well-versed, with recommendations that carry weight

ESSENTIALS: Open for dinner from 5 p.m. Monday to Saturday and 4 p.m. Sunday. Street parking. Reservations encouraged (there are only 13 tables) and major credit cards accepted; challenging for wheelchairs. Beer and wine only.

For such a tiny place, Bravo Nader radiates swagger. I’d driven by its confident sign (Bravo! Nader, actually) and occasional jumble of slogans so many times that I’d developed a mythos about the place. “It always feels like a party inside,” a friend told me. Was the hype real? Who the heck was Nader, anyway?

Turns out, that is chef-owner Nader Gebrin, who remains an effervescent presence in the dining room 23 years after he opened his eclectic Italian spot on a Huntington side street. And entering the Bravo Nader vortex for the first time is like walking into a parallel, retro dimension, one where someone has wedged tables into a homey, cluttered den for a dinner party — one that’s lasted, more or less, since 1996.

Gebrin undertook culinary training both in his native Egypt and in Switzerland before emigrating to New York and, later, opening his namesake restaurant, where his spin on Italian cuisine highlighted abundant seafood (Gebrin is an avid fisherman) as well as a few Egyptian dishes.

A collage of Gebrin hoisting daily catches covers the wall near the front door and shellacked fish dot the wood-paneled walls. The specials board is dense with seafood, too, and so lengthy we took a picture of it one night to study at our table. Menu deliberations can be involved — there are at least five dozen dishes — as well as quasi-public, because it’s nearly impossible to not to overhear conversation at neighboring tables. One night as Frank Sinatra belted "Summer Wind," I debated out loud whether to order a roasted half-duck when the woman next to me seemed struck by the idea, ordering one for herself. Another night, the room erupted into “happy birthday!” not once, but twice, and everyone became part of the celebration.

Anchoring this buoyant scene, though, is distinct efficiency. Servers are a well-versed lot, deftly ushering you through every stage of the meal. Their recommendations carry weight. We allowed ourselves to be steered to the crabcake, and that was wise — they were fried ’til copper, tightly packed with sweet crab meat and just enough filler to add heft, then plated in a suave tomato sauce. Another solid tip: Baked oysters, a robust Rockefeller riff chunkily breaded on top and melty underneath with buttery spinach and hidden pops of jalapeño.

You could construct an entire meal around shellfish alone, such as baked clams served both “a la Nader” (basically oreganata-style, as savory little lemon drops) or a gutsy clams casino under an armor of bacon. Both were excellent. Fried calamari, though blander in flavor, was featherlight.

Riffs on fried mozzarella periodically go viral on social media, and though the kitchen’s spiedini alla Romana might not, ever — its anchovy-and caper-accented sauce isn’t much of a looker — these fried triangles of mozz layered with prosciutto are addictive. Another super-alluring winter app: housemade sausage exuding fennel-y vibes over garlicky broccoli rabe, mashed cannellini beans spooned across the top.

Main courses are gargantuan, though uneven. One night, a fried whole red snapper looked as if it had been dropped into hot oil mid-swim, its skin paper-crisp, its innards still moist and flaky. (Curled around jasmine rice, it could have used more garlic sauce). Sea scallops, bearing the ombre of a quick sear, usher a superb pesto risotto pulsating with basil. Some things sounded better on paper (or in chalk) than in real life, though, such as soft-shell crab Francese, its batter pallid and soggy. Chicken scarpariello, possibly the most abused dish in the Italian-American canon, was a ghost of what it could be, its flavors blunted. That half roast duck came drenched in the demiglacé-like sauce that appears often here, with pockets of fat still clinging to its sides. And with the exception of a smoky spaghetti carbonara, pastas felt spiritless, such as rigatoni Bolognese or pappardelle with roasted eggplant in a tomato sauce that both lacked verve.

But this is a dinner party, after all, when you wave away the occasional food blip in order to bask in the experience. Not many places possess the charm and personality of Bravo Nader, nor the ability to make you feel like a treasured guest while forgetting about the transactional nature of the meal. That may be one secret to Bravo Nader's enduring success.