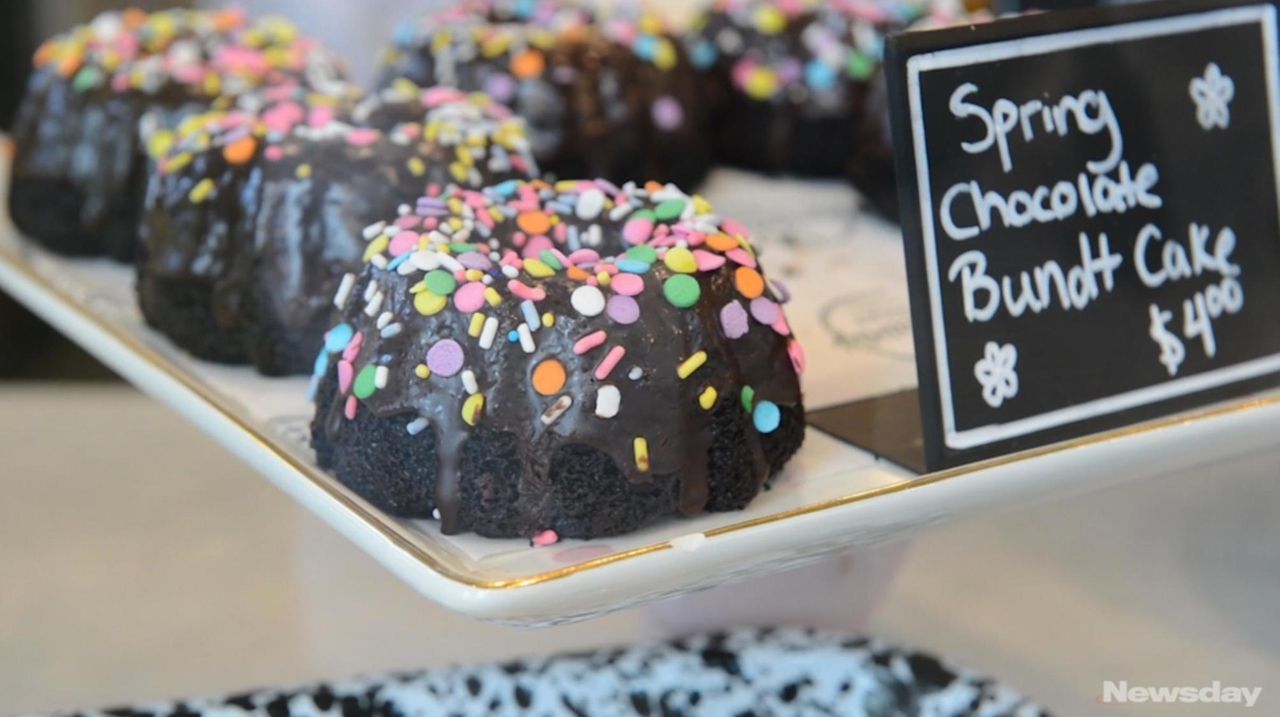 Booze, burgers or baked goods - Broadway Market in Rocky Point has it all. On May 11, 2018 Newsday got an inside look into the place that began at the farmer's market and ended on Broadway.   Credit: Daniel Brennan

AMBIENCE: Lots of subway tile, glass, and exposed ductwork, plus a handsome bar; dress up or dress down — you’ll feel at home either way.

Walking into Broadway Market feels like walking into the nexus of multiple trends: Blinged-out doughnuts are in the pastry case, grass-fed burgers are on the menu, there’s Counter Culture Coffee and both kombucha and cocktails on tap. Exposed ductwork, barn wood, gleaming subway tile and gallons of sunlight make the space feel ready-made for a Kinfolk magazine shoot.

Yet, behind its good looks, Rocky Point’s newest restaurant feels like much more than the sum of its parts. In its month or so since it opened, it’s become a magnet for a broad swath of people in this sleepy burg (you might see tatted-up 20-somethings and grandmothers at adjacent tables) and is one of the most endearing, satisfying places to eat and drink along this stretch of the North Shore.

Owners Ann Olenick and Shasho Pole — a baker and a rancher of grass-fed meats, respectively — hatched plans for Broadway Market while sharing a table at the hamlet’s farmers market. What about a place where you could buy both of their products, pastries and pastured meats but also grab some finely tuned comfort food, like burgers and Dutch babies?

The wait was suspenseful. Broadway Market rose slowly, and the target opening date (last fall) came and went. In the meantime, Olenick and Pole put together a sort of culinary dream team: Chef Johnny “Red” Maher, of Rockville Centre’s Flour Shoppe Cafe & Bakery, came on board to create the menu (he has since moved on, as planned); Dmytro Guydash, the former chef du cuisine at Topping Rose House in Bridgehampton, became executive chef, and pastry chef Elizabeth Moore was hired to bake breads and sweets.

Their skills saturate both sides of the place: to the left, a market where you can order food and artisanal groceries, and to the right, a sunsplashed dining room with a handsome bar that becomes a full-service restaurant after 4 p.m. and during weekend brunches.

And Broadway Market is the ultimate brunch spot. Even if the wait for food can be long, service is perceptive and each detail considered: The OJ. is fresh-squeezed (anchoring a tasty mimosa) and rolls are baked in house, including a crackling brioche for a breakfast sandwich that trades in concentrated flavors, such as maple bacon and a drippy Mornay sauce (of all things) and two fried eggs whose neon yolks squirt when you compress the bun.

The oversized pancake known as Dutch baby is given royal treatment here, akin to a giant popover with flaky edges and, in its center, gooey apples, hazelnut crunch and a smear of dulce de leche — breakfast and dessert melded, and on steroids.

The dough of a bacon, potato and leek flatbread was chewy but sallow, and its toppings (scant bacon, too many soft potatoes) didn’t synchronize — unlike a twist on avocado toast called shrimp toast, some flaky white toast heaped with snappy shrimp, slivered olives, herbed-up tomatoes and sliced avocado.

At dinner, Broadway Market’s vibe goes from cheerful to borderline romantic, even as the food hovers in the comfort-food zone. The words “Philly cheesesteak spring rolls,” did not fill me with excitement the way they did for my uncle (with whom I dined one night), but these crisp cylinders filled with crumbled beef and a molten cheese sauce transcended pub food.

A more virtuous appetizer of spring pea soup had depth of flavor below and a gossamer Parmesan-laced cream above, a fusion of earth and clouds. The disparate elements for seared cauliflower steak — coconut milk, Indian spices, green olives and a tangy hazelnut romesco — came together improbably, making for a dish even a carnivore could love.

Instead of linguine, the chef uses house-made vermicelli to pair with shell-on clams and giant shrimp — but while the pasta is perfectly al dente, it needed more sauce. By contrast, a half-chicken brined and marinated in buttermilk, then roasted to a burnish and kissed with lemon, was swimming in flavor, and — with a tangle of broccoli rabe and garlicky roast baby potatoes — large enough to feed you twice.

As befits a place half-owned by a rancher, the grass-fed burger at Broadway Market is adorned simply (pickles, melted cheese), cooked perfectly and is succulent despite being lean. As befits a place also run by a baker, pastries are a must. A flaky apple frittata with house-made cinnamon ice cream may send the table into fork wars, until the last bite.