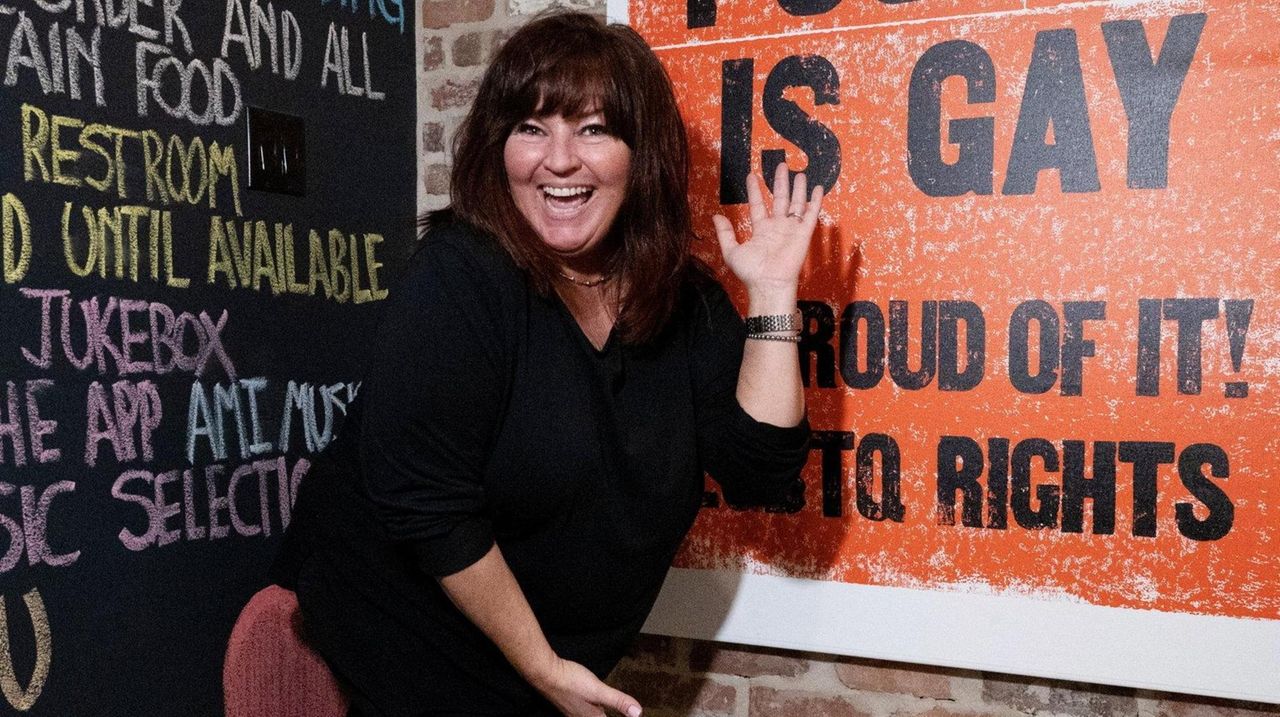 Gina Caggiano talks about BTW, which is one of very few bars and restaurants on Long Island devoted to the lesbian, gay, bisexual and transgender, or LGBTQ, community. The new COVID restrictions went into place on the eve of the new Oceanside bar's opening. Credit: Kendall Rodriguez

The day before the Oceanside bar BTW was set to open, owner Gina Caggiano fielded some sobering news: 10 p.m. would soon be the new state-mandated closing time.

After a long slog of permits, planning and renovation, Caggiano was piqued. "I’m on fire," she thundered at the time. BTW had been done and dusted for weeks — its bar stocked, its tables polished — and even more than that, was due to become one of very few bars and restaurants on Long Island proper devoted to the lesbian, gay, bisexual and transgender, or LGBT, community.

BTW, which stands for "born this way," still opened as planned on Nov. 12, but late-night reservations were nixed, for now. "I’ve been wanting to do this for years, because I think it's an underserved community," said Caggiano, who had been inspired by her gay or transgender friends. "I could've opened any kind of bar, but I thought this was important. I wanted to acknowledge this community correctly."

BTW is tucked away in a Long Beach Road space that has been one bar or another since 1933, and where Caggiano once worked 25 years ago. The space had been abandoned for two years when she saw it, and at one point during the renovation, its interior resembled an archaeological dig, with piles of dirt and rubble. By Caggiano’s estimation, she’d spent "hundreds of thousands of dollars," while she continued to run her other bar, North Village Tavern in Rockville Centre.

With pressed-tin ceilings, plenty of brick and clouds painted on the walls, BTW is almost assertively cozy; there’s also a DJ booth adorned with a rainbow, a pair of couches in the back, a ficus tree twinkling with tiny white lights. ("It took me 40 hours to string those lights," said Caggiano). But there are also COVID-era protocols in place: A reservation system for seats, and clear plastic sheets hanging from the ceiling as partitions.

While local LGBT social clubs and events have persisted over the years, the number of gay nightspots — principal venues for people to meet each other — has plummeted in recent decades, save for Cherry Grove and Fire Island Pines on Fire Island. In 1976, Newsday’s David Behrens noted that there were bars "thriving" in Bellmore, Sayville, West Hempstead, Copiague, Lake Ronkonkoma, Patchogue and Sayville, among others, with names such as Equus (in Seaford) or Dockside (in Lindenhurst).

One week into his new job as a bartender at BTW, Sean Hargrove, 29, said there were only two LGBT bars left on Long Island, in Babylon and Farmingdale. Another, the Bunkhouse in Sayville, "closed before I could go there." Instead, he and others could travel into New York City to socialize.

For the last seven summers, Hargrove has worked at the Ice Palace in Cherry Grove. While Hargrove has felt supported by managers and colleagues in hospitality jobs, he said, there was "a different feeling" at BTW. "I don’t have to watch what I say, or if I lisp too much. It’s important to have places where you can be yourself — where people can be themselves," he said. "It can be hard to explain to a straight person."

Caggiano concedes she had "learning to do" as BTW moved from conception to reality, and word spread through the community. "The people contacted me almost made me choked up. I didn’t realize how important this was," she said. "I’ve probably spoken to at least 150 to 200 people. It’s been a good journey, and I wish it hadn’t taken this long." Dancing, drag shows and other events are on deck for when bar life returns to normal.

Staff are still working out BTW’s cocktail list, but the bar is stocked with spirits, wine and a few beers by the can or bottle. Bar bites ($10 to $14) such as quesadillas, burgers, Tater-Tot nachos (called "Totchos") and wings comprise a menu that also includes a seared ahi-tuna plate ($14), pizza ($10) and naan ($14 to $17) with toppings such pancetta, ricotta, onion jam, dates and blue cheese. Weekend brunch brings platters of chicken and waffles ($15), bacon-and-egg-topped breakfast burgers ($16), and wild-boar hash and eggs ($14); breakfast boards for two ($55) are spreads of pancakes, waffles, French toast or breakfast tacos.

Because Caggiano doesn’t want to rush tables, BTW’s Tock-based reservation system has two windows each day, one at 11 a.m. (for weekend brunch) and another at 5 p.m. "We don’t want people to come here and not get in, and we don’t want to kick anyone out," Caggiano said. Still, in the bar’s first week, walk-ins have inevitably shown up. On a recent Thursday night, Caggiano darted from the kitchen to the front of house and back again. Near the end of the night, she grabbed a chair to chat to a group of friends celebrating a birthday dinner. The six men had come from the Babylon area; some professed a love of LGBT bars, while one preferred quiet nights dining out and another wished aloud for a piano bar somewhere on Long Island.

"It’s a shame there’s not more places like this," said Anthony Estremo, who was at the table. "This could be the start of something good."