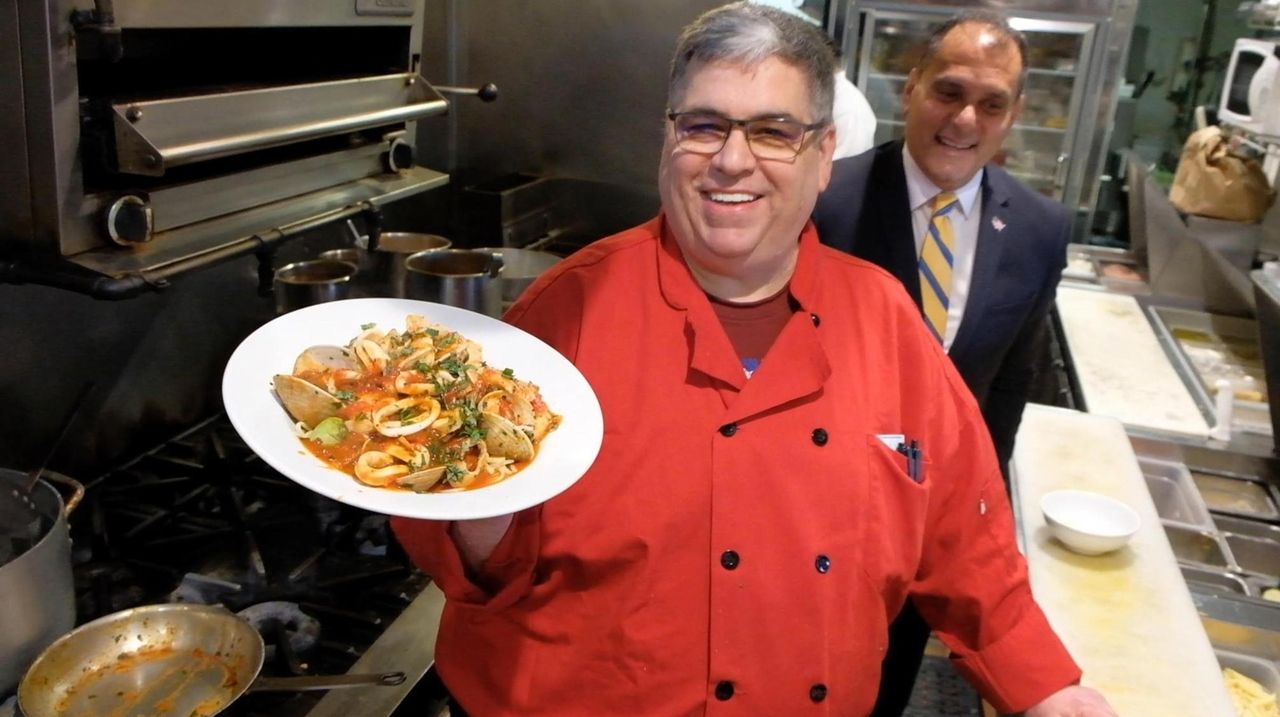 Cafe Al Dente is back in downtown Oyster Bay with some of its old bite and plenty of red sauce.

The homey eatery has returned at a new location five years after it closed at 2 Spring St. over purported code violations. Lawsuits and townwide agita followed. The Town of Oyster Bay eventually settled with owner Phil Morizio, who’d sued citing denial of due process and damage to the building while it was shut.

His long-popular cafe now is cooking in the former site of Spinnakers and, earlier, the more upscale Jack Halyards and Fiddleheads. The compact space sports some Italianate imagery to go with the menu.

But a sign above the parking lot for Spinnakers is still up. And you can continue to order a Spinnakers hamburger here.

That’s no surprise. Owner Morizio has teamed with Damien Carlino of Spinnakers in this new venture. The result is generally good, sometimes better, whether you’re dining in or taking out.

A curtain with the image of the Basilica di Santa Maria della Salute separates the kitchen from the dining areas and bar. Close by, a painting suggests a bridge over a canal. But they’re about as Venetian as Cafe Al Dente gets. Signs more accurately announce Oyster Bay beach and fresh oysters.

And oysters are an apropos way to start, whether uncooked or broiled under a mantle of garlic and Parmesan cheese. Parmesan is deployed more delicately in crisp, toasty triangles of polenta, set on marinara sauce. The polenta pairs well with an opener of major-league, red-sauced meatballs lightened with a dollop of ricotta.

A trio of panko-fried mozzarella discs is stacked on a pool of vodka sauce for a hefty, cheesier experience that’s best shared. But you can skip the house’s pizzas, which can come out either puffy and pleasing or drier than a cardboard delivery box. The pie capped with pepperoni, meatball and sausage could turn you vegetarian.

Instead, consider pastas. Rigatoni Norcina doesn’t quite evoke Umbria and its great pork, but it’s a savory bowl, full of crumbled bacon, pancetta and sausage in a creamy pink sauce that hints of basil. Rigatoni Bolognese delivers a hearty serving of familiar meat sauce with ricotta.

Linguine Sinatra is more “My Way” than “Wee Small Hours.” But it’s generous with clam sauce, topped with enough shrimp to ensure excess. Besides, it goes with the better selections wafting by from the restaurant’s pop soundtrack.

Parmigianas abound here. Pick the chicken and the eggplant before veering toward shrimp and veal. Cafe Al Dente sends out tasty hero sandwiches as well as platters of the stuff. The house sandwich, layered with a fried chicken cutlet, mozzarella, American cheese, bacon, lettuce, tomato and mayonnaise, seems like an outlier in the repertoire, but it’s worth ordering.

That also goes for the herb-crusted salmon, moist and flanked by spinach with garlic and oil and those polenta triangles that jump-started dinner. Seafood fra diavolo, loaded with calamari, clams, shrimp and scallops atop linguine, does pack just enough heat to spark the tender shellfish and squid.

Cafe Al Dente lists our desserts, all of which appear in the eatery’s “kitchen sink.” Veteran diners who remember the “dirty snowballs” from the cafe’s previous address will be disappointed that the scoops of ice cream taste not of toasted coconut, but they do still have sprinkles. Chocolate fudge layer cake improves on cold, industrial cheesecake and pasty, dull cannoli.

No matter. By this point, you won’t have room.