A bag of crawfish with old bay seasoning at Ben's Crab in Oceanside. Credit: Yvonne Albinowski

When Ben’s Crab opened in Oceanside in 2017, it was the only restaurant on Long Island serving what it called “Louisiana Cajun Style Seafood.” Now boiled feasts of spicy crawfish, crab legs, lobster tails and / or shrimp are popping up like mushrooms after a rainstorm. From Cajun Claws in Patchogue to Cajun Crab Shack in Floral Park, more than a dozen “Cajun seafood” eateries have opened in the last year or are planning to do so soon.

“The dining scene is changing,” said Cecilia Burgos, a marketing executive at Hook & Reel, which operates one franchise in Hicksville and more than 15 nationwide. “This style of restaurant appeals to millennials, and also to Latino and African American diners.” The chain has more than 50 new locations in the works, including in Valley Stream, Westbury and Bay Shore. Hook & Reel’s corporate headquarters is in Flushing, Queens and, Burgos said, almost all of the franchises are Chinese-owned — as are most of the Cajun seafood restaurants in the Metropolitan area. (One notable exception: Ben's Crab, whose owner, Nico Salindho, emigrated from Indonesia.)

Menus vary, but the main event is a collection of crustaceans and mollusks, plus potatoes and corn on the cob, tossed in a huge, clear plastic bag with your choice of seasonings. The bag is tied up and boiled and then brought, steaming, to your table. Equipped with plastic gloves, lobster crackers and picks, you dig right into the open bag to manhandle your quarry. 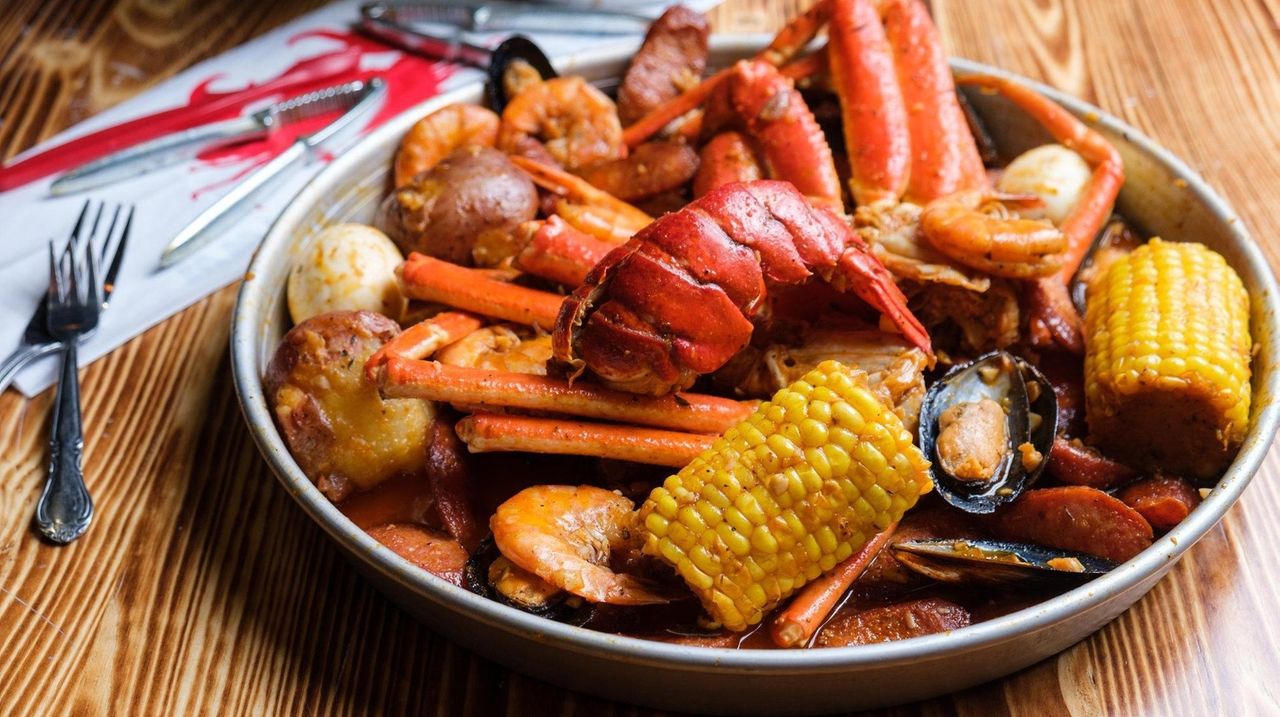 Most restaurants offer a build-your-own bag option, with per-pound prices $13 to $19 for crawfish, shrimp, mussels and clams, around $25 for snow crab legs, $30 for lobster and topping out at around $40 for king crab legs. Or there may be set combos of two or more species. The sauce lineup usually includes garlic butter, Old Bay, lemon pepper and Cajun; the spice level is also up to the diner.

Salindho, who opened a second Ben’s Crab in Uniondale in October, said that when his first restaurant opened, customers balked at the format. “‘Why don’t you peel the shrimp?’' they asked. ‘Why are you making us do all the work?” But over the last two years, the complaints have abated. “Now that it’s so popular, people have changed their minds.”

Cajun seafood restaurants tend to be good deals (you’d be hard-pressed to spend more than $40 a head), but in their desire to keep prices down, quality can fall short of the highest bar. Frozen shrimp, snow crab and king crab legs are a given (virtually all such seafood served in the U.S. is) but I ran into some frozen Dungeness crabs and, oddly for Long Island, even a few frozen clams. Crawfish and blue crab, seasonal items, also may not be freshly caught.

If you’re thinking, “that actually doesn’t seem very Cajun,” you’re right. The menus at these places are borne of an unlikely confluence of culinary styles.

The story starts in New Orleans, as you might expect, but the protagonists are Vietnamese. Louisiana was one of the locations where refugees settled after the fall of Saigon in 1975 and up through the 1980s. Joe Bui, who owns the Vietnamese restaurants Rolling Spring Roll in Farmingdale and Syosset, explained that “the Vietnamese experimented with the traditional Louisiana crawfish boil, adding their own flavors. I had a cousin who would boil crawfish with condensed orange juice and Vietnamese herbs.”

The style spread to Houston, whose sizable Vietnamese population grew after Hurricane Katrina displaced (again) many the Vietnamese from New Orleans. By the early 2000s, Viet-Cajun seafood restaurants were “a thing” in Greater Houston, and also in California, which has the largest Vietnamese population in the country. Boiling Crab, a chain with 20 locations (most of them in California) debuted in Orange County in 2004.

The next chapter of our story begins in China, and requires rewinding to the 1980s. Crawfish had been introduced to China a few decades earlier, but now it really started to take off in restaurants. According to a 2018 article in the South China Morning Post, production tripled from 2007 to 2016, leaving the Chinese the consumers of more than 90% of the world's crawfish.

“Crawfish spread like wildfire in China,” said Danny Wu, a Taiwanese-American who owns Thom Thom steak and sushi restaurant in Wantagh. “And, like other Chinese trends — like hot pot — crawfish spread to Flushing and, now, to Long Island.”

As it happens, Chinese-American restaurateurs here were ready to take the ball and run with it. Tom Lau, who was a partner in the short-lived Cajun seafood restaurant Mighty Catch that opened and closed within a few months in Oceanside  (now the site of LI's second Cajun Bucket) noted that Cajun seafood was “the next big thing. First there was Chinese buffet,” he said, “then a lot of people opened Japanese restaurants, then Asian fusion. Now it’s Cajun seafood.”

There are as many Cajun seafood restaurants in the works on Long Island as there are in operation. Watch this space.