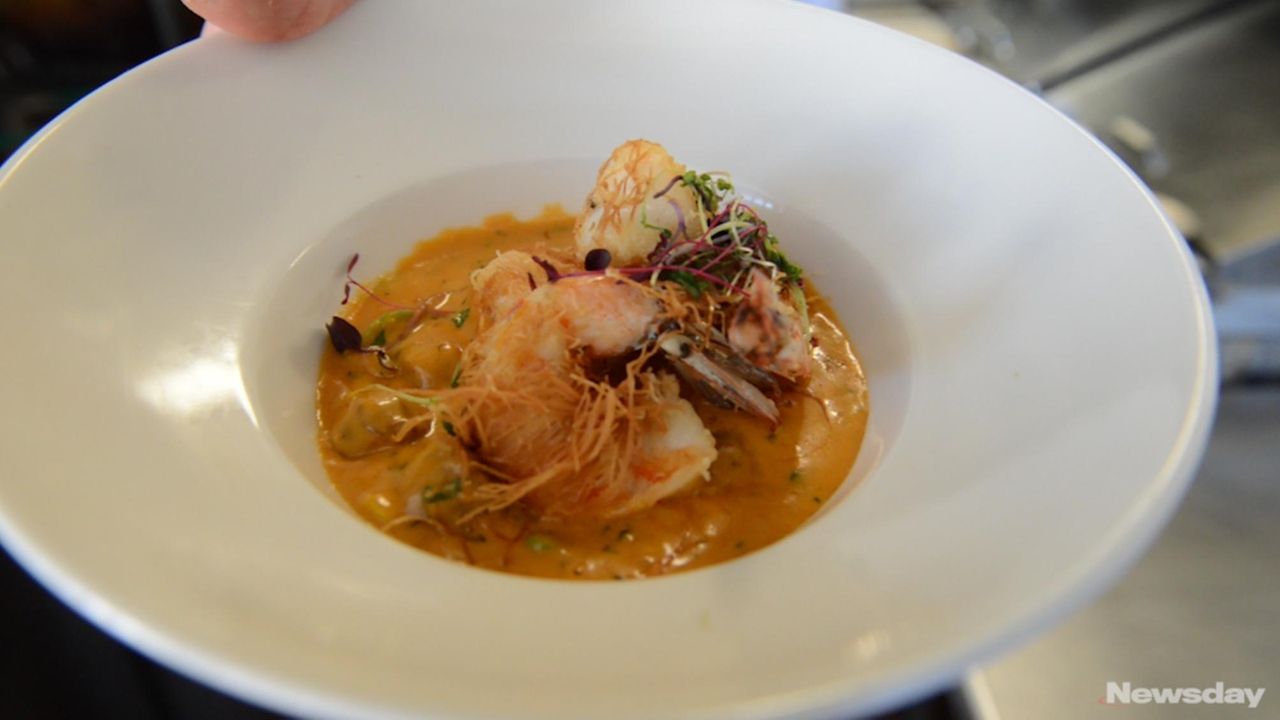 SERVICE Welcoming and intuitive, with a good sense of timing

Cardoon Mediterranean, which opened in Seaford earlier this summer, falls into this last category. You must navigate a string of easy-to-miss turns to find this low-slung café along a serene canal. Once you do, the payoff comes quickly: After a warm, low-key welcome from a hostess, you can (if you’re lucky — Cardoon gets busy) take a spot at an umbrella-topped table on the patio, with a backdrop of potted palm trees and bobbing boats. (There are more tables and a bar inside).

That mellow ambience is slightly deceptive, though; Cardoon’s menu is more ambitious than most of its waterfront brethren. For years, this was the Parkside Café; when that business closed last year, Stephen and Jen Rosenbluth — who already own Merrick’s Anchor Down Bar & Grill — took over the space, changing up the new American formula that predominates at many waterside places with flavors pulled from across the Mediterranean rim, from Greece (haloumi cheese and taramasalata) to north Africa (harissa and merguez sausage) to Turkey (pita and shawarma spices).

It’s a tricky proposition to pull off, but the Rosenbluths have placed Cardoon’s reins in the hands of former Anchor Down chef de cuisine Jason DeLeo, who picked up some pan-Meditteranean tricks at MP Taverna in Roslyn. When Cardoon’s risky fusion works, it really works, with unexpected textures and flavors bristling against each other in memorable ways. For instance, a crispy shrimp appetizer of grilled, finger-length shrimp topped with crackling shredded phyllo dough (aka kataifi) lounges in a creamy fava- and sausage-dotted “fondue” sauce so delicious you could drink it straight. Surprising pops of hot pepper lurk in a silky, gorgeously plated halibut crudo. A smoked-trout taramasalata — creamy Greek dip laced with roe — wallops with brininess, and is addictive when smeared atop triangles of charred pita bread. Even when those touches are slightly puzzling — such as pomegranate granita that comes with oysters-on-the-half shell, or the sour note underscoring Cardoon’s very good fries — their imagination still charms and engages.

That playfulness gets too unbridled at times, though, making for rough eating seas. An appetizer of grilled octopus, a requisite dish these days, just has too much going on: Besides the enormous, slightly spongy grilled tentacle at its center, the tiny plate also holds roasted fingerlings, coins of chorizo, pickled shallots, grilled fennel, and two types of greens, its underlying romesco sauce castrated via overadornment. Crispy artichokes seem like mangled thistles imprisoned in batter. A watermelon-tomato salad dotted with roasted sweet corn and crumbled feta wilts with too much dressing, as does a grilled haloumi cheese panzanella salad, whose promise fizzles both because of acid overload but also the puzzlingly large crouton on the plate (one made from the same puffy Turkish bread given to diners upon arrival).

Cardoon’s numerous seafood entrees sometimes sing, such as a hunk of pan-seared hake with a perfectly crispy skin and a delicious watermelon-watercress salad, a special one night. However, some fish suffers from the overdressed greens that plague Cardoon’s salads — a pile of pea sprouts underneath lobster, in a mop over a zesty swordfish steak, as a distracting tuft of microgreens atop a plate of tagliatelle — itself a hot mess of too many ingredients, from sausage to shrimp.

Curiously, it is Cardoon’s meat plates that exude confidence and polish. When haloumi reappears as a melted sheath atop an ever-so-slightly charred (but still rosy-pink inside) burger, along with a slather of aioli and wilted arugula, you could swoon. A succulent grilled Cornish hen seethes with pepper, cinnamon, and other earthy shawarma spices, drawing cool notes from tzatziki underneath and punch from a drizzle of harissa-laced sauce. Tabbouleh, pita, two sauces and all, it’s a dish worth returning for.

The same cannot be said for Cardoon’s funnel-cake-baklava creation, which gets points for originality and largesse but after a few bites, just seems like a giant piece of fried dough. Better is chocolate panna cotta. And while the wine list is decent here, the cocktail list is still tepid, and perhaps a work in progress — best to order off menu.

At Cardoon, you can see, smell and taste the kitchen’s zany, well-meaning heart oozing out in unexpected ways. When less is more, they hit high octaves — but the mellow, intuitive service and seductive setting are already there.