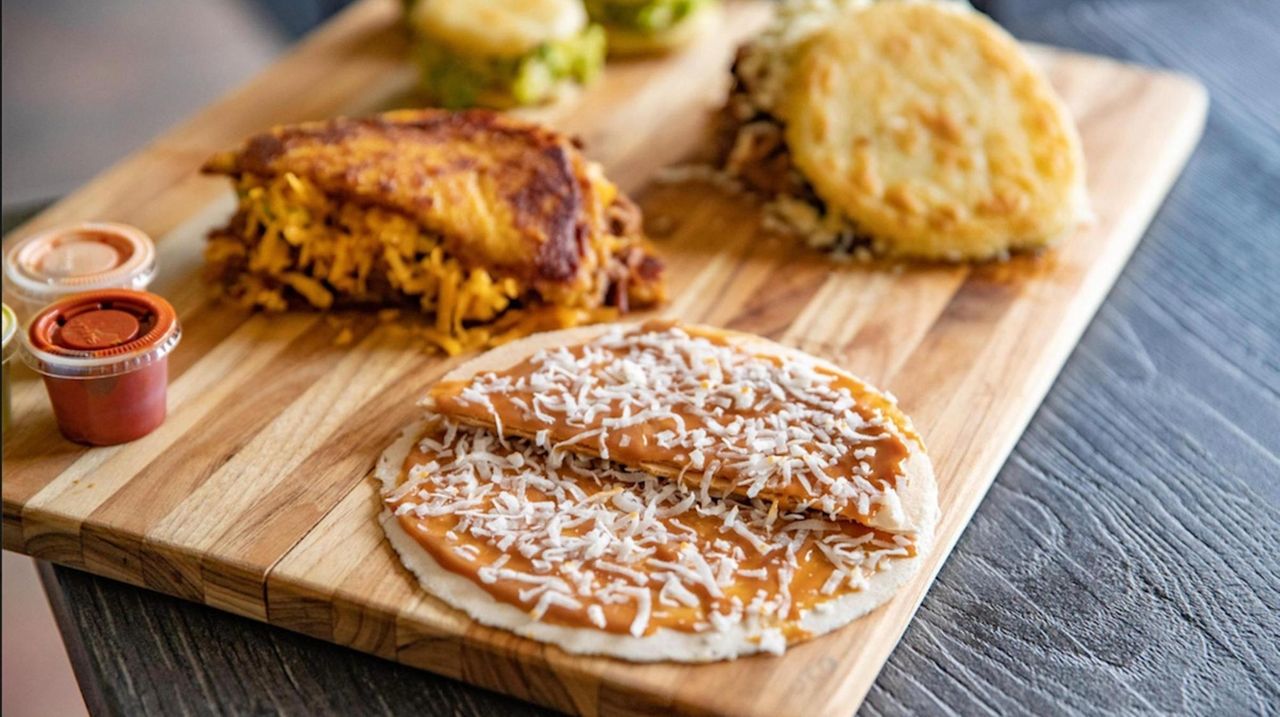 Newsday's Scott Vogel chats with the couple behind Ceci's Arepa Joint in East Meadow, where their love for arepas brought them together.  Credit: Newsday / Raychel Brightman

While the ride-sharing service known as Uber has proved invaluable to those in need of lifts and those in need of giving them, on occasion it also serves up twists of fate that lead to fine new eateries. One recent example of this particular kismet began a few years ago when Carolyn Rios opened the app and ordered up a car that she would soon discover was driven by Michael Barriga. The two were not unknown to each other. Several years back they had dated while they were students at Kellenberg Memorial High School in Uniondale. After a brief courtship, the pair went in opposite directions, a separation both believed would be permanent.

But after the chance meeting, Rios and Barriga began dating again, this time discovering that they shared an affection — for each other, yes, but also arepas. A street food exceedingly popular in Colombia and Venezuela, where Rios’ family and Barriga’s family are from respectively, arepas are thick, flapjack-like corn cakes fried on a griddle, loaded with all manner of meats and cheeses, and typically sold at areperias — arepa takeout joints — common all over northern South America. The couple, both now 28, found that our own continent produced its share of decent arepas and cachapas, the latter a sweeter, kernel-rich and cornbread-y cake. The hitch was, you had to travel to places like Queens and Washington Heights to get them, which seemed like a long way to travel for arepas and cachapas that were merely decent.

"They are usually made on Sundays by moms and aunts in both our cultures," said Rios, who dearly loved her Colombian grandmother’s arepas, and has been making them herself ever since the woman’s passing, when Rios was just 10. Barriga, for his part, was a huge fan of the Venezuelan arepas made by Cecilia Chacche, also known as his Aunt Cecilia. One day, she invited Rios over for what turned out to be a life-changing dinner. "We bonded over arepas," Rios said simply.

Last August, after Barriga was laid off from his job due to the pandemic, he and Rios began to seriously consider opening an areperia using Aunt Cecilia’s recipes. "We knew there was nothing like this on Long Island," said Rios, who together with Barriga began searching for the perfect spot on the Island for what they were already calling Ceci’s Arepa Joint. In another happy coincidence, the perfect spot turned out to be just a few miles from their old high school, in East Meadow. "We had such a great feeling about it, we decided to lease the place in October." Ceci’s opened in March.

The menu is compact but solid, featuring 10 or so fillings, all of which can be loaded into either arepas or cachapas. Among the most popular: the namesake Joint, comprising flank steak, sweet plantains, black beans and cheese ($11.99). The interplay of savory and sweet, particularly when served cachapa style, is irresistible. As with most new Latin restaurants these days, Ceci’s also offers a variation on birria, in which juicy-wet chicken or steak is topped with shredded Oaxaca cheese ($10.75). The Machu features good-sized shrimp tossed in a sometimes overpowering lime juice marinade ($9.75). Can’t decide which to try? Consider one of Ceci’s "flights"--three mini-arepas, each served with the filling of your choice. ($6.25 to $8.50).

What once seemed like a series of random occurrences is beginning to feel like destiny for Barriga, Rios, Aunt Ceci — who personally makes dozens of arepas every morning before heading off to her real job at a beauty parlor — and several other family members helping out in the kitchen. They’re all along for an Uber-inspired ride that so far shows no sign of stopping.