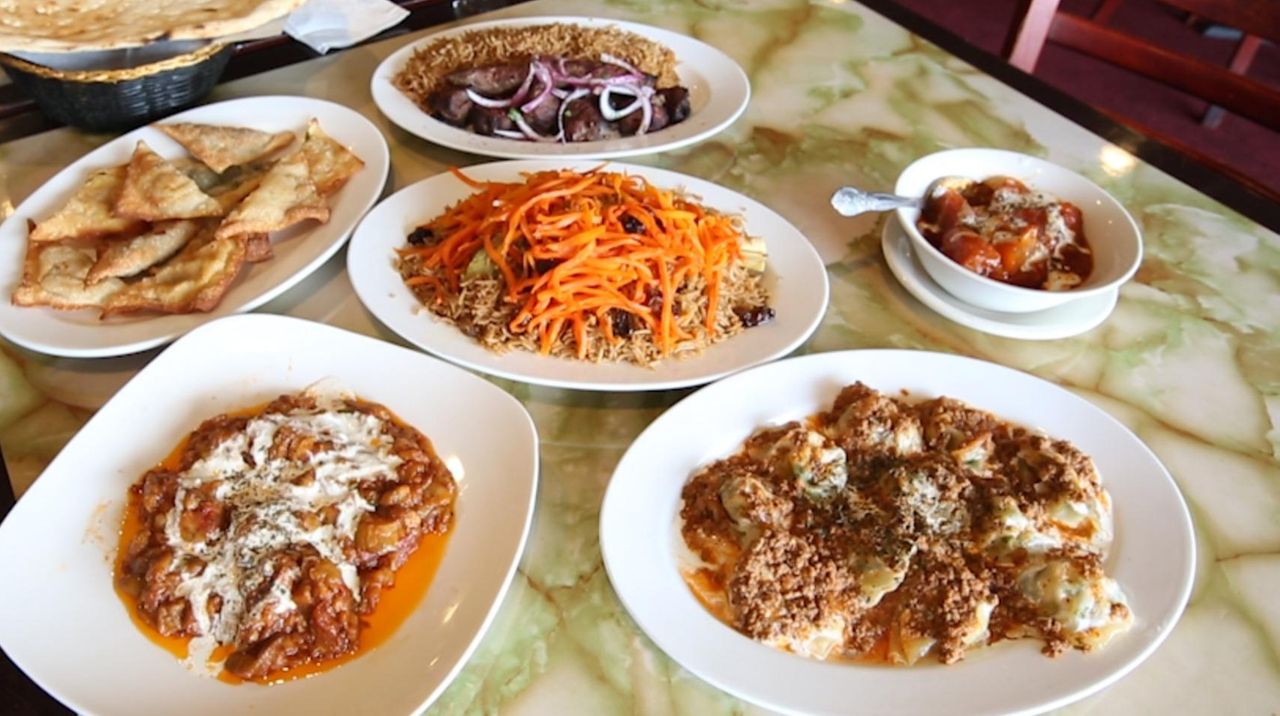 On Thursday, July 20, 2017, members of Mirzai family, who own Choopan Grill in Selden, spoke about their enthusiasm for bringing favorite dishes to Long Island from their home town of Kabul, Afghanistan. Credit: Bruce Gilbert

AMBIENCE: A homey, family-run restaurant with mom in the kitchen and daughters taking turns working the minimalist dining room.

It’s easy to overlook Choopan Grill, the Afghan restaurant that’s been tucked in back of a humdrum Selden strip mall for more than seven years.

On the surface, little has changed since 2010. Above the same red-neon-framed windows, the same backlit signs in both English and Farsi welcome you into a simple dining room whose gray walls are hung with framed photographs of the Grand Mosque in Saudi Arabia and other holy sites.

But about three years ago, the kitchen underwent a major transformation. Rona Mirzai, one of the metropolitan area’s Afghan-cooking pioneers, sold her half of Ariana in Hell’s Kitchen, one of city’s most venerable Afghan restaurants, to head east. She took over the halal restaurant from its original owners, who founded the Choopan Grill in Hicksville in 2005 (and still own it).

In Selden, Mirzai has teamed up with her daughters Zahra and Faiqa, who train alongside their 73-year-old mother and double as Afghan ambassadors guiding customers through a cuisine of exotic flavors that has been cultivated over centuries from a country that straddles the crossroads between Asia and the Middle East.

Mirzai’s cooking showcases dishes — meats, curries, dumplings and hearty rice platters dubbed palau — that she began learning as a little girl from her own mother in Kabul. She brought the recipes with her to Queens 36 years ago, when she escaped a then Soviet-occupied country that remains mired in conflict. At Choopan Grill, she feeds a blossoming community of fellow Afghans who, like her, have settled in a region that includes Selden, Ronkonkoma and Medford.

One of Mirzai’s specialties is an irresistibly thick yogurt, the result of a dayslong process, which has a starring role in a savory Afghani milkshake of yogurt, cucumber and dried mint known as “dough.” The yogurt’s coolness serves as a joyful exclamation on badinjan burani, a silken fried eggplant dish of tomatoes, onions and jalapeños.

The yogurt is also a key accent on the appetizer menu, particularly when it is drizzled over handmade dumplings that are topped with a tomato-rich ground “chicken sauce,” a slightly spicy ragu that could double as a Bolognese, and garnished with dried mint. Dumplings, in fact, are all recommended here. Aushak are boiled, bite-sized purses filled with a garlic-laced leek mixture; steamed mantu are stuffed with fragrant ground beef or chicken.

Those same paper-thin dumpling skins become crunchy when fried for a sambosa, a less doughy version of a samosa, with fillings that include ground beef, ground chicken, creamy squash or crispy onion-laced potatoes.

Kebabs of beef, lamb and chicken play a central role on Mirzai’s menu, and to make decisions easier there are several combo platters. The largest, aptly named “Combo 4,” features four different kinds of kebabs: juicy pieces of deeply marinated lamb tikka, less tender chunks of flavorful chicken breast, portly lamb chops and your choice of beef or chicken kofta, a slender ground meat kebab that is laced with garlic and cumin. Want less? Order the Sultani Kabob with the lamb tikka and a chicken kofta.

The ground meat fared better in the kofta than in the chapli kebabs, which are formed into patties and fried until the outsides are crisp. The result has a more intense flavor but also an inside that’s super dry.

All kebabs come with large helpings of rice, and here that means freakishly long strands of fluffy long-grain basmati that Mirzai boasts is an exclusive brand imported for her by family members. The rice comes bronzed from being cooked with lamb stock and a few dashes of Gravy Master.

Those looking for fall-off-the-bone meat should not miss the Kabuli palau, a majestic dish that features slow-cooked lamb shank under a bed of rice that’s scented with cardamom, tossed with sliced almonds and draped with ribbons of carrots and plump raisins.

Mirzai lavishes as much care on vegetables as on meat, and they are available as entrees as wells as sides. Highlights include the bamiya, or okra stewed in a mix of tomatoes and onions; sabzi, a slow-cooked curried spinach that gets added flavor from fresh coriander and scallions; and kadu, chunks of caramelized pumpkin that arrive bobbing in the tomato and cayenne curry in which they are finished.

You’d do well to round out the meal with firnee, a silky milk custard that comes showered with almonds and pistachios.

The restaurant may not be much to look at, but Mirzai puts her heart and soul into these dishes. After more than six decades of cooking, she knows that the room to focus on is the kitchen.