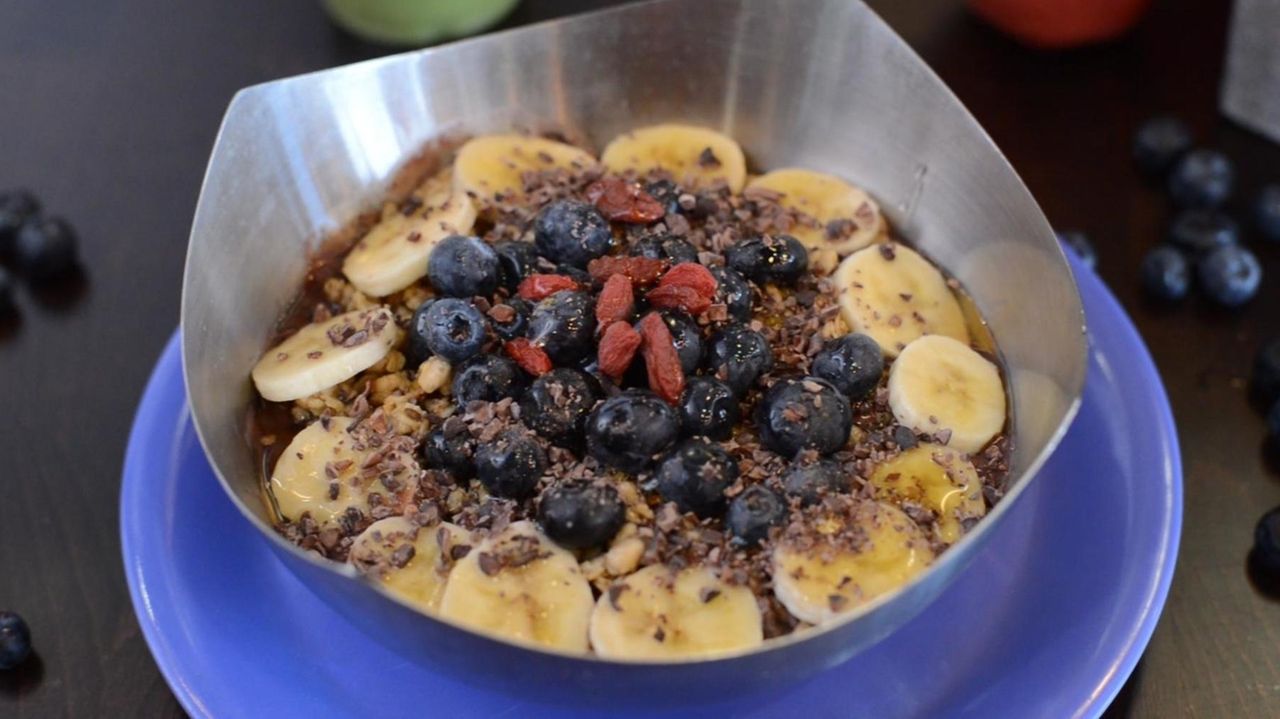 Vitality Bowls Smithtown, the brand's first New York location, opened in October.It is part of a trend on Long Island that includes several chainlets. Some who rely on local farmers. On  Jan. 10, 2018, Vitality franchise owner Marlene Durai spoke about the cafe, which specializes in acai bowls, smoothies, paninis, fresh juice and salad. Durai said she is happy to be a part of the trend. Credit: Daniel Brennan

Long Island has plenty of highly anticipated restaurant openings each year. Some of the most successful, though, don’t have a single white tablecloth, craft cocktail or mac-and-cheese skillet. Instead, their stock in trade is acai bowls, bone broths, grain bowls and salads ordered at counters, hastily composed and often taken to go.

So-called healthy fast food is acing the dining space, and its slow creep onto Long Island has reached a critical mass. Since the fall, Chopt Creative Salad Co. has opened its second location here, a handful of new acai-bowl cafés have set up shop, and the island gained its first location of Syracuse-based CoreLife Eatery, inside Farmingdale’s Airport Plaza.

On the opening day of that CoreLife, Jan. 11, the line was steady for build-your-own bowls, which cost between $10 and $13 each, piled with grains, greens and grass-fed meats, plus piquant toppings such as pickled jalapeños.

“We’re obsessed,” said Cameron Daleo of Smithtown, a SUNY Binghamton student who became familiar with the chain there, and drove to the opening from Smithtown with her boyfriend, Matt Onorato. “It’s one of the only healthy places in the [Binghamton] area.”

Five years ago, if someone were to tell you that grain bowls and bone broths would ever have the same sex appeal of, say, grilled cheese sandwiches, it may have elicited a blank stare. What these bowls lack in oozing cheese or even composition, though, they make up for in concentrated nutrition, thoughtfully sourced ingredients and an absence of gluten and carbs that is magnetic to a public increasingly swearing off both.

In 2001, the opening of the first Chopt Creative Salad Co. near Manhattan’s Union Square — with its pioneering twist on build-your-own salad bars — signaled the opening bell for low-carb, fast-casual food. In the ensuing years, chainlets such as Digg Inn, fresh&co, sweetgreen and The Little Beet grew steadily but tended to be concentrated mostly in urban areas and were slow to spread to suburbia.

When CoreLife started, the healthy fast-casual model was new to the upstate Syracuse area, said J. Todd Mansfield, a physical therapist with a background in nutrition. He and his partners — two of whom had experience running chains such as Panera Bread and Wendy’s — co-founded CoreLife Eatery in Syracuse in 2015.

Though Chipotle Mexican Grill had popularized its quasi-healthful spin on Mexican fast food, grain bowls were still a somewhat alien concept outside of major urban areas. Even so, CoreLife took off almost immediately. Three years after its first pilot location opened, the chain has 24 suburban franchises in eight states, “Long Island has been really good to us so far,” Mansfield said, and a second location is to open in Garden City later this year.

Healthy fast-casual chains also have earned cred by getting at least some ingredients from farmers who grow and produce sustainably, such as Freebird Chicken for The Little Beet and Cutchogue’s Satur Farms for Chopt. The chains’ buying power — and consistent demand — has helped fuel the growth of sustainable and organic agriculture.

Satur Farms, for instance, has expanded in tandem with the purchasing of its greens by Chopt, sweetgreen, Le Pain Quotidien and fresh&co. "We’re made for each other,” said co-founder Paulette Satur. Her operation farms 775 acres divided between the East End and Florida. “We love [the chains] because it’s a nice, consistent base year-round.”

Running in tandem with the craze for carbless, protein-heavy (and sometimes high-calorie) salads and grain bowls is an obsession with acai bowls, or pulpy, vaguely sweet dishes that layer pureed acai — a type of berry loaded with antioxidants — with items such as peanut butter, coconut, almonds or even Nutella.

Local chains SoBol and Bango Bowls keep opening new locations to meet the demand for acai, while national chains continue to move in. Marlene Durai is the first Long Island franchisee for California-based Vitality Bowls, which opened in a Smithtown shopping center last fall. Durai, a Pilates instructor with two kids, had long lamented that she couldn’t get healthy fast-food near her home in St. James, and decided to dive into the industry. “My whole family went to California to try [Vitality Bowls’] food and loved it,” she said. Already, Durai is planning two new locations on Long Island.

The Little Beet (630 Old Country Rd., Garden City): Chef Franklin Becker may have seen the fast-casual writing on the wall when he opened the first Little Beet in midtown Manhattan in 2014; it has since grown to seven locations, including The Little Beet that opened in Roosevelt Field’s “dining district” in 2015 as a stand-alone café / kiosk with a sleek look and wraparound steel counter. Here, the build-your-own bowl concept (protein plus grain plus toppings plus sides, starting at $8.95) gets a funky touch from dressings such as piquillo garlic sauce or turmeric tahini. Though Becker has since left The Little Beet, creative culinary director Gabe Kennedy and executive chef Geoff Kornberg change the menu seasonally; one of their spins on winter comfort food is the Brussels Hustle, a supercreamy bowl of shaved Brussels sprouts, avocado, green salsa, pickled onions, pecorino cheese and white-bean spread ($11.55). (Pictured: The winter soup bowl, which includes brown rice with spirulina, roasted kale, chicken, butternut squash soup and salsa verde.) More info: 516-387-6300, thelittlebeet.com

Chopt (Multiple locations): When it opened near Manhattan’s Union Square in January 2001, Chopt Creative Salad Co. was one of the pioneers in the healthy fast-casual space. “That first day, we had a line down the block, and our computers broke down,” said co-founder Colin McCabe, initiating a tradition of requesting charity donations in exchange for salads on the opening day of a new location — which has now happened 52 times. The first Long Island locations opened in Woodbury ( 8285 Jericho Tpke.) in 2016, followed by New Hyde Park (1600 Marcus Ave.) in late 2017. It can be extremely busy at each — with waits nearing 45 minutes — for both signature and build-your-own salads of braised meats and toppings such as Cotija cheese or golden beets. Try the warm Chicken Tinga grain bowl ($10.29) or a Vietnamese meatball salad with tamarind vinaigrette ($10.99) — the latter is part of a rotating cast of “destination” salads that change monthly. Though most diners take their salads to go, the cafés have an airy, vaguely Scandinavian feel, with pops of color and a bank of self-served iced teas. To jump the line, use the Chopt app to order and prepay; your bagged order will be waiting on a rack for pickup. (Pictured: The Vietnamese meatball noodle bowl.) More info: choptsalad.com

Vitality Bowls (96 E. Main St., Smithtown): Pulpy, colorful acai bowls are the main attraction inside this petite Smithtown café with a steel counter and a handful of tables. Vitality Bowls, which began in San Ramon, California, in 2011, now has more than 50 locations nationwide, and this is the first on Long Island. Acai superfood cousins pitaya (dragon fruit), acerola and graviola (soursop) also form the basis of bowls and smoothies that cost between $7 and $13 and can be showered or pureed with things such as coconut, chia seeds, goji berries and honey. Graviola blended with kale, banana, mango, pineapple and coconut water makes for a delicious, citrusy green smoothie ($7.49). Vitality Bowls’ menu is rounded out by juices, salads and panini. (Pictured: The Eggini, a breakfast sandwich stuffed with organic, cage-free eggs, spinach, mozzarella and pesto.) More info: 631-652-3262, vitalitybowls.com

CoreLife Eatery (207 Airport Plaza Blvd., Farmingdale): Started in the Syracuse area in 2015, this grain-bowl and bone-broth chain has swelled to two dozen locations in three years. Though you can customize grain bowls to your gullet’s delight at CoreLife, among the signature bowls are tuna poke over quinoa, kale and Napa cabbage ($11.45) and tender sliced flank steak over purple rice and arugula with roasted vegetables, pickled jalapeños and ranch dressing ($12.45). Bone broths can come filled with noodles and veggies but are hearty enough to sip on their own. There is also a bank of self-service drinks, such as beet lemonade, and the chain offers an ordering app for those who want to skip the line. (Pictured: Shiitake mushroom and roasted tofu veggie broth bowl.) More info: 631-396-0852, corelifeeatery.com

A steak, bacon and blue greens bowl at CoreLife Eatery in Farmingdale.