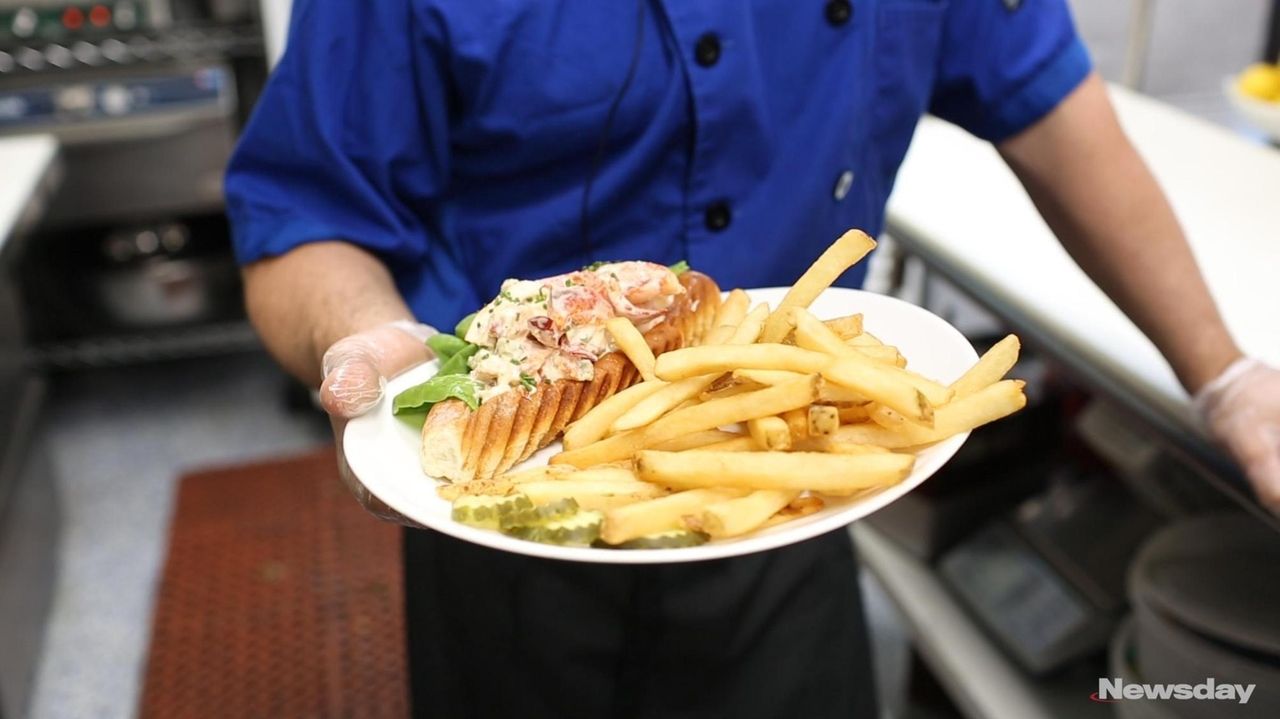 Eric Kuna, the head chef at Claudio's in Greenport, explains how he makes a lobster roll, one of the signature dishes of the landmark restaurant that has been serving patrons for nearly a century and a half. Credit: Yvonne Albinowski

It has taken decades to write these three words: Eat at Claudio's.

The landmark restaurant, which changed ownership in March after 148 years under the Claudio family, is preparing food to match its popularity. Proprietors departed, and current, must be happy.

Claudio's and its offspring, the alfresco Claudio's Clam Bar and self-serve casual Crabby Jerry's, command a waterside setting in Greenport. The history of Claudio's starts in 1854, when the whaling ship Neva arrived from the Azores. Whaler Manuel Claudio was on board.

After 16 years, he had the savings to open Claudio's Tavern. The history that unfolded has extended to forays into French cuisine, the site's reported use as a bootlegging stop during Prohibition, the era of shrimp scampi, and its ongoing lure as a destination for day-trippers and vacationers, as well as locals. The new owners of the three eateries include well-known attorney Perry Weitz, as in Weitz & Luxenberg, and his son, David.

The Victorian bar and the polished dark wood remain, as do vintage portraits of assorted Claudios and other images from the past. It's all very lived in. But you'll immediately notice a couple of changes: improved service and better food.

But skip the limp, sesame seed-crusted loin of tuna; and the tired crabcake, despite the roasted corn salsa with it. Cacio e pepe, the classic Roman pasta, is dominated by a harsh rush of black pepper, overpowering Pecorino Romano cheese, olive oil, bucatini and your palate.

Refresh your appetite with the generous watermelon-and-tomato salad, which takes in feta, arugula and quinoa; or the Caesar salad made with kale.

But French onion soup is timid and on the thin side; the New England-style clam chowder, routinely bland. Instead, try the refined, light lobster bisque, with unexpected hints of sherry and cayenne.

That choice should direct you to the superior main course: steamed lobster. You may have lobster broiled or scampi-style, too, but there's no reason to take any risks. The lobsters range from 1 1/2  to 4 pounds. And the lobster salad roll is a good one. But the Connecticut-style roll, or one that should be warm and buttery, shows up almost dry and at room temperature.

Finfish will make you continue seaside, with standout, line-caught grilled local swordfish, finished with summer squash and herbaceous gremolata; and a flavorful special of pan-seared local striped bass, paired with a salad of strawberries, fennel and arugula. The Claudio's spin on cioppino, the San Francisco fish stew that almost always goes from tasty to travesty  as it meanders eastward, makes the dish fresh again, full of shellfish, squid and halibut, in a zesty red sauce.

Nothing, however, can revive the fried fisherman's platter,  a reminder of the days when Claudio's offered dishes dubbed Seafood Neptune and the Captain's Table. The platter's contents look closer to brown than blond, entombed in heavy, hard breading.

Claudio's has served countless steaks. A juicy, 30-ounce porterhouse, seasoned with rosemary and garlic, is cooked precisely to order and easily can feed two. The double-cut Berkshire pork chop with roasted corn and pineapple competes favorably.

In 2012, the National Restaurant Association noted Claudio's as the nation's longest-running eating establishment run by the same family.  Today, you'll recognize it for the past and, more important, the present.