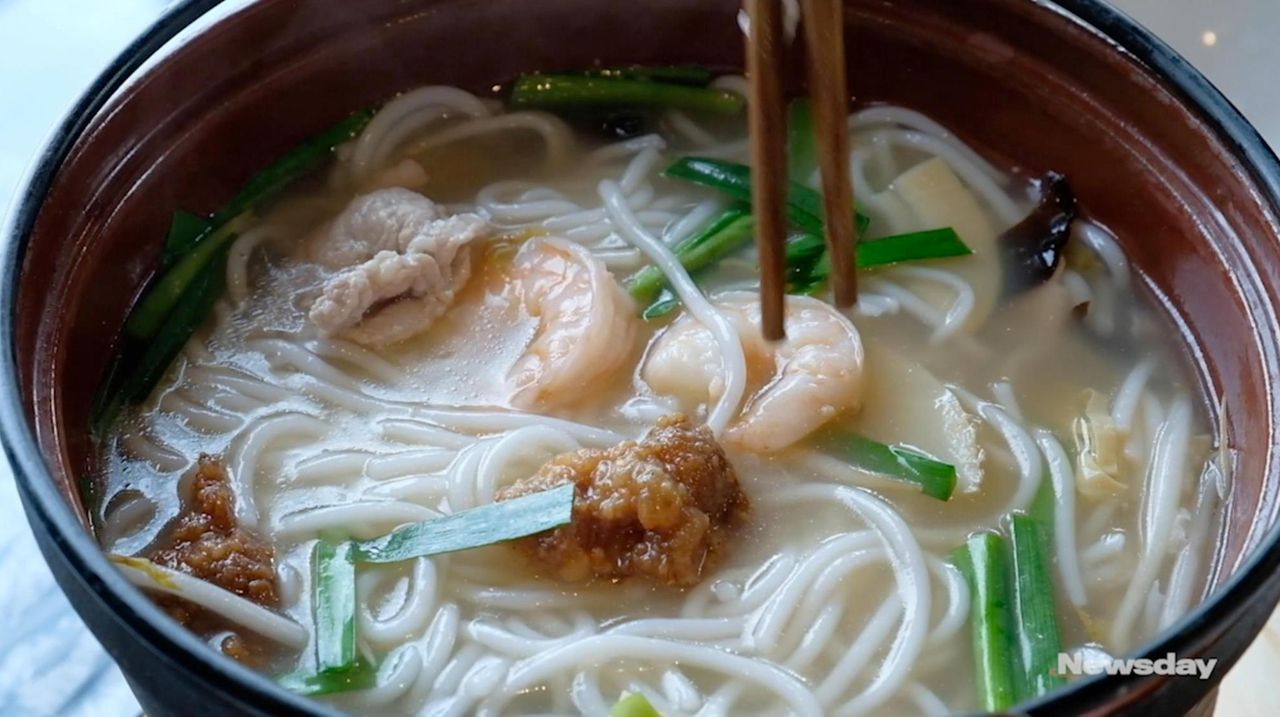 Xiao (Tony) Zhuang, co-owner of Coco Palace in Great Neck, gave a step-by-step look at how he makes one of the restaurant's most authentic dishes. Credit: Daniel Brennan

AMBIENCE: Serene with a hint of hip

ESSENTIALS: Open Sunday to Thursday 11 a.m. to 9:30 p.m., Friday and Saturday to 10 p.m; wheelchair-accessible; street parking. A liquor license is pending; for now you can bring your own bottle.

I eat a lot of Chinese food on Long Island, in New York City and, on two occasions, in China, but these are a few of the dishes I’d never tasted until I visited Coco Palace in Great Neck. This is the only restaurant on Long Island to serve the cuisine of Yunnan province, and one of very few in New York.

Yunnan is in China’s southwest, just south of Sichuan, and it shares with that province a taste for spicy red chilies and the numbing-herbal Sichuan peppercorn. But, said the restaurant’s co-owner Tony Zhuang, the Yunnan kitchen uses much less oil than Sichuan, turning more often to the bright, tropical palate of its neighbors to the south: Myanmar, Laos and Vietnam.

Zhuang and his sister, Coco He, are partners at Coco Palace. Neither is a trained chef, but both grew up in their mother’s restaurant in Kunming, capital of Yunnan. Back in China, Zhuang worked as an interior decorator, and you can see his hand at work in Coco Palace’s chic design, a blend of traditional batik-print textiles, black-and-white renderings of Yunnan’s countryside and plenty of light streaming in through the floor-to-ceiling windows.

Coco Palace’s menu is brief and easy to navigate. (While you do so, try not to fill up on the little I-beam-shaped buckwheat snacks offered gratis.) Every appetizer we tried was a winner: Those mushrooms, pan-fried to concentrate their savor; that eggplant, “Old Kunming style,” served cold with an equal amount of roasted red bell peppers. (Don’t order the trotters unless you possess the Chinese love of gelatinous textures and fearlessness in the face of fat.)

I never expected to find chicken salad in a Chinese restaurant, let alone one as refined as Jingpo-style chicken. This specialty of Yunnan’s Jingpo ethnic minority features meaty shreds of chicken tossed with lemon juice, cilantro, mint, chilies and peanuts.

Lining the window of the open kitchen you’ll see a stack of red clay pots shaped a little like Bundt pans. Once filled, the “steam pot” is covered and placed over a pan of simmering water to gently cook its contents — in this case, the famous Yunnanese dish of chicken and wild matsutake mushrooms in broth, which only needed a hint of salt to kick it up into maximum soothing mode.

The restaurant’s most dramatic dish is “crossing the bridge noodles” (here called Yunnan Oriental-style rice noodle). To your table is delivered a small wooden case and a burner on which simmers a cauldron of simmering pork-and-chicken bone broth. Inside the case is a collection of little dishes containing chicken, pork, strips of omelet, squid, shrimp wood ear mushrooms, chives, scallions and, finally, snow-white rice noodles, which the server will add to the broth in precise succession.

Rice noodles figure prominently on this menu, either in broth with pork, beef or chicken, or tossed, dry, in a bowl, as in the soft tofu with rice noodle, whose name did not prepare us for a gorgeous display of tofu, minced pork, chopped peanuts and scallions, all concealing a bed of spicy noodles.

More rib sticking than rice noodles are rice casseroles, cooked and served in glossy ceramic pots. I wish I could recommend the savory fresh boletus (porcini) casserole to vegans, but the mushrooms were given an able assist by slivers of lap cheong, sweet Chinese pork sausage.

Most of Coco Palace’s menu offers straight-up Yunnan cuisine, but the kitchen indulges in a rare act of fusion with a house special of wontons stuffed with pork, shrimp and black truffle. I’m on the record decrying the current flood of truffle oil inundating local restaurants, but here’s an example of truffles done right: the tiny black flecks imbued each tender wonton with that singular muskiness.

Another of the kitchen’s flights of fancy was, of all things, branzino. There’s no such thing as Mediterranean sea bass in landlocked Yunnan, but this one was treated grandly, coated with smoky chilies and Sichuan peppercorn, wrapped in bacon and then showered with scallion and cilantro, all of which complemented the fish’s mild, white meat.

Chalk it up to a kitchen that’s in complete control of its flavors and textures, even when it veers away from Yunnan.

86 Cheap Eats to try on LIThe latest Cheap Eats restaurant reviews. LI's best Chinese restaurants of 2019We are in the midst of a regional Chinese food boom.