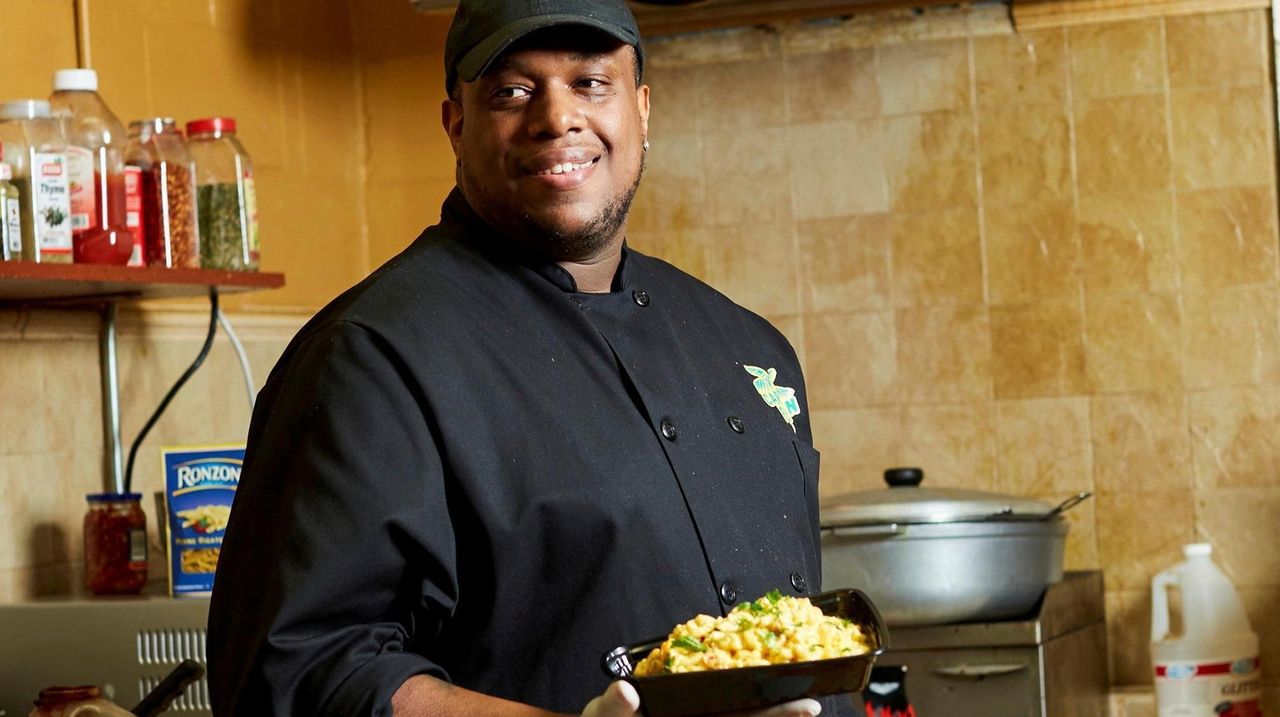 Butter, flour, milk. For chef Steven McKail, most mornings start with the ritual of whisking together a béchamel sauce for his molten mac-and-cheese — something he needs to do every day, or there could be trouble. "If I don’t have it, some customers leave," said McKail as he tipped a giant bowl of elbow pasta into the golden sauce, which he thickened with Velveeta.

Inside the kitchen of Caribbean Flavors in Port Jefferson Station, McKail then stirs in at least four other grated cheeses — Gouda and Cheddar among them — just as his grandmother, Marvie, taught him. "In Jamaica, this is called macaroni pie," said McKail. Jamaica is where his grandmother grew up, but a Queens kitchen is where she taught McKail her recipes. When he pulls the mac-and-cheese from the oven, edges bubbling, the surface is a crisp, coppery brown. "That’s actually the best part," he said.

Most dishes have both a personal and collective back story, and in more than a few cases, that story was almost invisibly shaped by African- or Caribbean American cooks. In the case of mac-and-cheese — called macaroni pie not just in Jamaica but across the Caribbean and in parts of the South — the dish’s parts can be traced to both Europe and northern Africa, and its debut in Colonial America is often credited to Thomas Jefferson. However, it was actually Jefferson’s enslaved chef de cuisine, James Hemings, who learned the ways of pasta during a culinary apprenticeship in France and served a cheesy macaroni casserole to Jefferson’s guests until he was freed from slavery in 1796. (Back then, it was seen a dish of the well-to-do).

While mac-and-cheese has a fascinating trajectory — including Italian American influence and its rise as inexpensive staple dish during the 20th century — its reign as quintessential American comfort food is unrivaled. "It’s a dish that’s been African-American since the inception of this country, but the fact is it’s not particularly expensive [to make]. For much of the 20th century, cheese had been given out by the government," notes food historian Jessica B. Harris, who has written several books on the foods of the African diaspora. "The dish has cultural resonance, and is also a dish that is substantial."

Some of what underpins what we think of as American cuisine is a mashup of European, African, Caribbean and indigenous foods. The contributions of Black cooks who shaped early American food, especially as slaves, gave rise to Southern staples such as gumbo, braised greens and fried chicken — but also deeply influenced cooking techniques. "People aren’t really aware the degree to which African-Americans had a hand," in the way we cook food, said Harris. For instance, she added, "There is a case to be made that frying in oil is a sort of African culinary technique."

As you move through a day of eating and drinking on Long Island, here are a few other staples with Black roots, and a few places to find them.

Without our morning cup, many of us couldn’t function — and while arguments about the origins of coffee abound, most sources point to Ethiopia being the place where the first coffee arabica beans on earth were cultivated, hundreds of years ago. "Ethiopia is the center of origin and diversity of arabica coffee," wrote coffee researcher Bayetta Bellachew. While the nexus of coffee growing has since shifted elsewhere — such as to central and South America — Ethiopia still contributes 3% of the world’s supply, and tends to have a bright, sometimes citrusy profile.

A rack of falling-apart, barbecued pork ribs — well, you might as well stick an American flag in it, right? This food that so deeply mirrors our love of fire and pork had its origins with indigenous Caribbeans such as the Taino, who would slow-cook meat in a process called barbacoa. Later, the smoking of tougher cuts of pork was further honed by African-Americans in the South, techniques that flourished alongside the influx of industrial-style pork in the 20th century. Ribs are now a staple of any barbecue spot. "There’s a lot of different methodologies, and no right or wrong way," said Victor Hickson of Vic’s Food Truck, who dry rubs his ribs before smoking them in his backyard.

Long before they were $2.50 a pop and came with mignonette, oysters were daily sustenance for New Yorkers, who would eat them both roasted and on the half-shell from the oyster carts and parlors that blanketed New York City. African-Americans were integral to the robust oystering trade in New York Harbor in the early 1800s, and among those who ran its oyster cellars was restaurateur Thomas Downing. Inside his Wall Street oyster house, Downing perfected myriad methods for cooking oysters, including roasting them over open flames. He went on to become one of New York City’s most prolific caterers and his oysters gained such a reputation for excellence that they were shipped to Europe.

Though custardy desserts began to trickle to the colonies from Europe in the late 1700s, it was again chef James Hemings who left his mark on their popularity. Among the dishes Hemings learned to cook in France were custard-based desserts such as crème brûlée ("burnt cream"), which he served to Thomas Jefferson and his guests. Hemings’ recipe for Snow Eggs, a meringue surrounded by crème Anglaise, has survived, and is basically a riff on the French dessert îles flottante, or floating island.