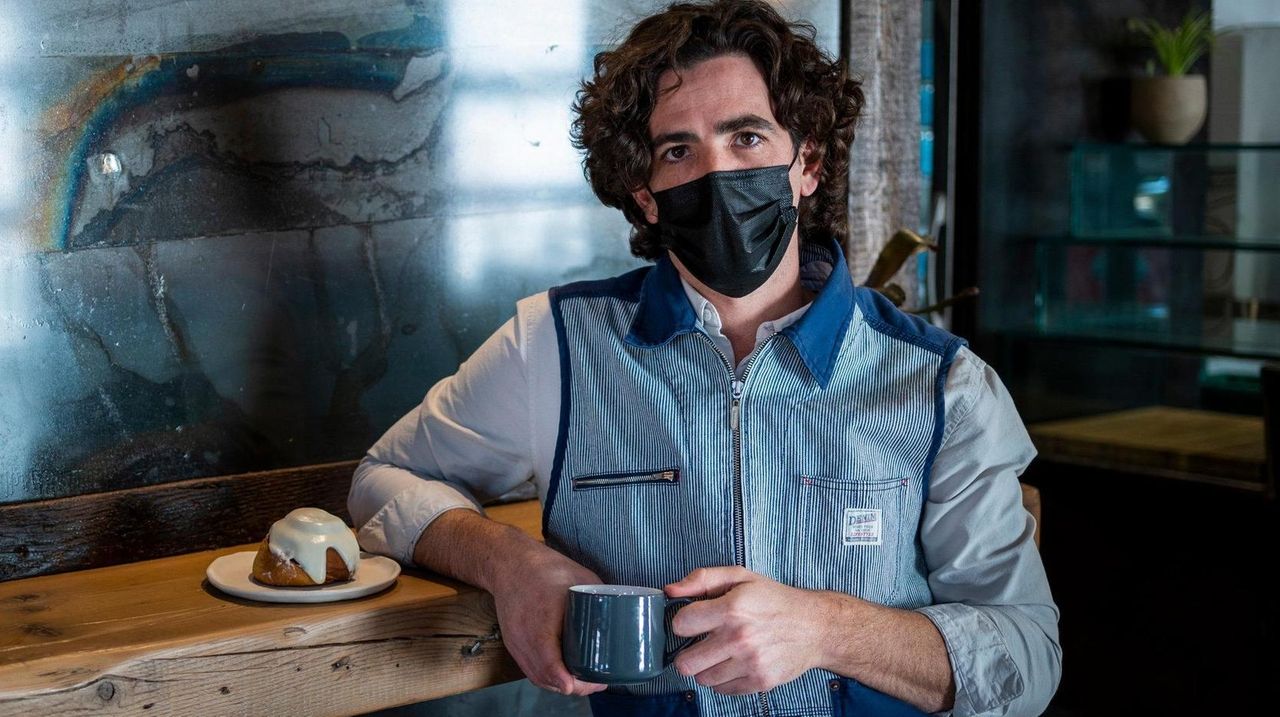 It takes about 10 minutes for the caffeine in a brewed cup of coffee to flood our bodies with adrenaline. While the physical process never really changes, the venues where we seek that buzz are ever multiplying, especially on Long Island, where people increasingly speak cortado, macchiato and even single-origin beans fluently. In tandem, our taste, too, in so-named specialty coffee has spiked: Dunkin’ Donuts may be closing 800 stores across the country, but a wavelet of new, independently owned coffee spots is hurdling over COVID-19 to usher in a fresh tide of caffeinated pleasure. While coffee, tea and pastry may unite them, each is different from the last — from a Glen Cove roastery-slash-cafe devoted to transparent sourcing and top-level beans to a community-minded Valley Stream cafe to an Island Park spot ready-made for social media. And as coffee-fueled days melt into winter’s early dusks, each offers robust savory eats, and in some cases wine and beer.

Here are four new coffee spots to check out as fall turns to winter.

One part espresso bar, one part living room and one part dreamscape, this new Island Park café (opened in August) is ready-made for any Instagram shot you might throw its way. Bold floral wallpaper, sculptural lighting, and chairs, ottomans and a sofa upholstered in velvet combine for a tricked-out millennial vibe. Indeed, pink is a theme, even in coffee and tea ($3.50 to $5.75) from a hot East Rock Pink cortado to an iced Pink Island to a fuchsia Dragonwell tea latte. Beans come from Brooklyn-based Variety Coffee Roasters — the usual espresso, lattes and flat white, as well as white mocha — and alternative milks include soy, oat, almond and coconut. On the pastry front are croissants, coconut-chocolate chip scones, pumpkin brownies and vegan doughnuts striped with chocolate and pink frosting. The kitchen also goes savory, with charcuterie boards ($29), honeynut squash and pomegranate toast ($14), pizzas, grilled-cheese sandwiches, and salads. And when you want to replace that caffeine buzz with a lower frequency, CBD seltzers, mimosas, beer and wine are all on hand. Open 8 a.m.-7 p.m. daily (4 p.m. closing Sunday). More info: 516-442-7208. eastrockcoffeeislandpark.com

This airy, striking new spot opposite the Stony Brook LIRR station opened at the end of August, a longtime dream realized by co-owners Michael Buchholz and Zachary Russell. The 30-something couple both worked in New York City and later at Southdown Coffee in Huntington before founding Druthers, which they had planned for years; as with Southdown, COVID threw down some delays, as did tropical storm Isaias, which knocked out their power just as they were ready to go. "We've had to jump through hoops of fire," Buchholz said, recalling the long early months of 2020.

The space gleams, from the polished stone floors to smart bistro tables to globe pendant lamps. As at Standard Pour, coffee, espresso and cold brew are fueled by Counter Culture Coffee, and specialty creations include espresso tonics (aka spronics), hazelnut cortado or pumpkin chai cocoa. Pastries are baked every morning by Russell, whether pumpkin-pecan scones or brown-butter cinnamon rolls or olive-oil muffins. "He’s been baking olive-oil cake for Christmas every year, and it was a family favorite," said Russell’s mom, Kathryne Piazzola, who with husband Kevin Pheiffer are also partners. Open 7 a.m.-5 p.m. weekdays and 8 a.m.-4 p.m. weekends. More info: druthers.coffee

"We spent a lot of time deconstructing what we wanted to be what we wanted to be and where we were getting everything from," said Darlene Gomez of Standard Pour in Valley Stream. With her cousin, Shanelle County, she opened Standard Pour in Valley Stream in mid-October — and while on the surface, it’s a welcoming, handsome spot, there's a lot more to the business than serving lattes.

This space was long well-known to the community as the former home of Sip This, and before that, Slipped Disc records. Its next incarnation has a considered ambience which blends modern lines — a wall-length leather banquette, a blonde-wood coffee bar — with the historic details of a 1930s building, from wood floors and plenty of brick. Drip coffee, espresso, cortado, lattes, macchiato, single-origin brews and cold brew ($2.50 to $4.15) are made with beans from Counter Culture Coffee. The alt-milks are legion — oat, almond, soy, coconut and macadamia — and loose-leaf teas come from Brooklyn Tea, a Black-owned tea company that produces flavor combinations such as cucumber-melon green and vanilla rooibos in addition to the usual black and green, and matcha and chai lattes ($4 to $5).

But drinks are only part of the story. Baked goods, sandwiches, salads and a weekend brunch comprise a dynamic menu, with pastries ($3.75 to $5.25) such as cheddar-cheese-dill scones and pumpkin chocolate-chip loaf, baked by Warberry Cakes & Fancy Confections (with the exception of one: Bread pudding baked by the owners’ aunt, Marva Cudjoe, that's only available on weekends). Chefs Dwayne Daniel and Raya Alleyne cover the savory front, from an $8.95 baconeggandcheese (yes, one word) of an over-medium egg, spicy bacon jam and smoked Cheddar on a pretzel bun; and a Cobb salad ($10.49) that can be topped with jerk chicken.

"We spent a lot of time ensuring our vendors are people of color, minority-owned and women-owned, from build out to partnerships," County said. "We wanted to be a welcoming space to all in the community, with an experience that is second to none." Open 8 a.m.-5 p.m. Monday to Saturday. More info: 516-596-2000. Instagram: @standardpourli.

A few times a week, for much of the fall, passerby will stride up to the front of Southdown Coffee in Glen Cove and try the door. Until now, it’s been locked, even as a sign hangs over the door and the interior — a stunning renovation of this historic 1810 saltbox — has long been set.

The transformation of this historic Glen Street building into a showcase cafe and roastery, by far the largest in the Southdown Coffee constellation, has been a nearly two-year-long project that owner Mark Boccard is eager to unveil. The COVID-related delays in permitting and inspections has had its way with his best-laid plans, but also afforded the team time to perfect the interior, from a sun-drenched seating area in the front to a steel-and-concrete espresso bar and behind that, a roastery with an enormous Mill City roaster rumbling in its midst.

"The story of this build out is told in the concrete," said Boccard, pointing at the pebbled concrete floor that holds footprints, ridges, and the ghostly imprint of a former wall. Original beams and brickwork, a fireplace, and even (for now) an old piano are interwoven with slashes of graffiti and a few murals (including one of Nas in a bathroom) left over from when this house served, for a time, as the street-art installation known as First City Project.

The building’s renovation, though, is only one part of the story. Since Boccard began Southdown Coffee out of a tiny Huntington storefront in 2014, his business has grown to include spots in Oyster Bay and Northport, the latter opened just earlier this fall. His exacting roasts of single-origin beans from small estates around the world — Ethiopia, Mexico, Brazil — have gained a following that stretches beyond Long Island, and now all will take place in Glen Cove (in 2019, Boccard won this-place in a bench mark national roasting championship, and one of his former roasters, Christina Chin, has gone on to found her own company, Favor Coffee).

As with other locations, Southdown will serve a focused food menu of pastries (such as cinnamon buns, baked each morning) and savory bites, but the emphasis will be remain on finely tuned coffee and espresso, whether a cup of brewed coffee from the La Cañada region of Oaxaca, Mexico, with hints of orange to oat-milk cappuccino to bracing snap-chilled coffee. Down the line, beer and wine, as well as expanded menu, are on deck.

But as in Huntington, Boccard hopes Glen Cove will function as a lab of sorts for continuously elevating the quality of locally roasted coffee, whether via cuppings (aka fast-paced coffee tasting) for others in the industry, or public events.