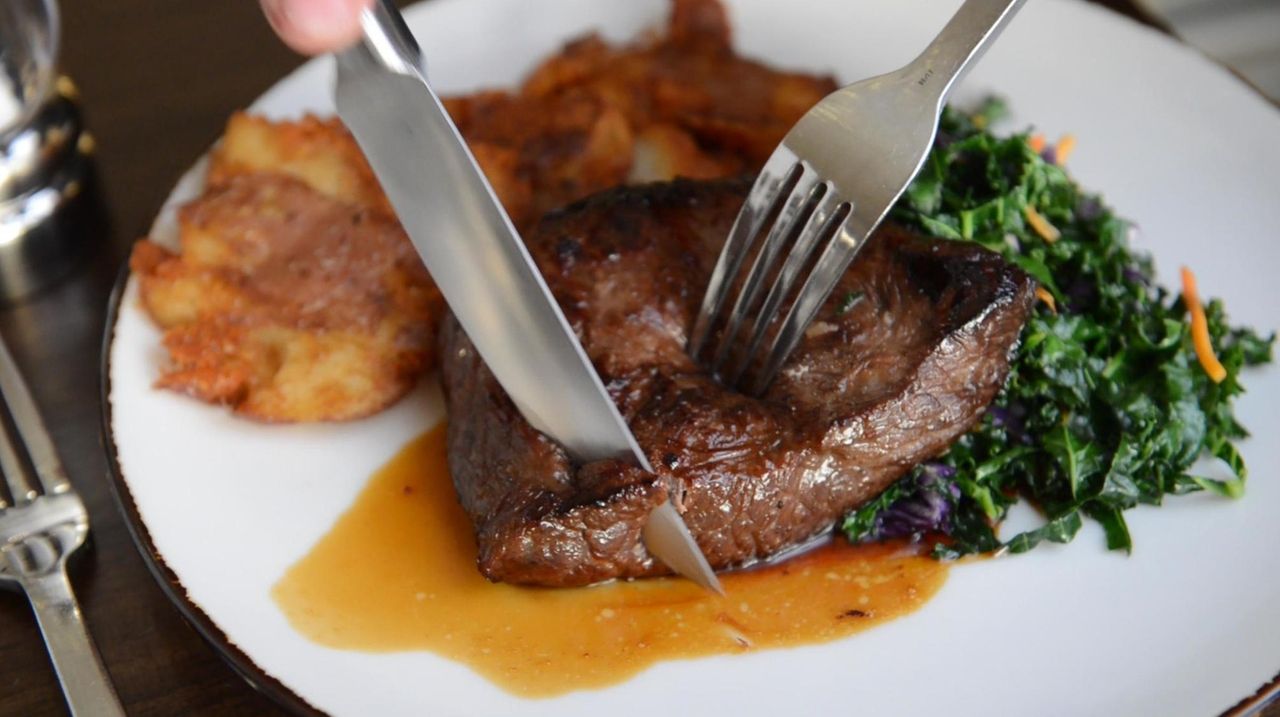 The Long Island Marriott in Uniondale opened a new dining spot in the hotel called the Crop & Kettle.  The redesigned space of the old Champions offers the usual sports bar staples and more, with an upscale ambience. Credit: Newsday / Daniel Brennan

Champions was basically a sports bar, heavy on burgers and sandwiches. Crop & Kettle is its redesigned and refocused successor, with menus that hint at a sense of place.

It’s a welcome one, showing immediate results and the potential for much more. And you’ll still find staples such as cheeseburgers, chicken wings and Caesar salad.

The question that lingers, however, is why you’d want to dine at this restaurant if you’re either not at an all-day conference or staying at the hotel? To become a destination for more than a captive audience will require at least fine tuning what’s available now, and being more ambitious overall.

It’s a pleasant enough spot, from the lobby onward, delivering a midcentury image, with a spare, sleek look. Think of the upscale lounge at an airline terminal in Scandinavia. Lots of straight lines, mostly cool colors, egg-chair offsprings.

There’s an angular, noisy, and popular bar nearby, as well as a comfortable seating area fashioned in suitably minimalist style. Form and function are neatly balanced. But it does seem a bit chilly.

The earnest, engaging, all-smiles dining room staff does warm things up. Yet, sitting at a table, you still might feel as if you’re waiting for a spreadsheet exam instead of dinner.

When you do dine, dip first into the kettle. Chef Paul Weber’s Long Island clam chowder is creamy, well-seasoned and as close to the New England version as Oyster Bay is to Greenwich. The mild, amply cheesed Blue Point lager onion soup keeps its brew connection pretty quiet but stays a satisfying option.

The Long Island duck confit Rangoon arrives like packets less crisp than hard and singed. They can’t be rescued by a sidekick of cranberry-mango chutney. Charbroiled local oysters are sealed to their shells and overdone, with a dry, herbed butter and Parmesan cheese crust.

Your meal definitely improves with main courses and sandwiches. The pan-roasted Duroc pork chop, flanked by roasted red grapes and mashed potatoes, controls the sweetness and benefits from a spring touch of grilled asparagus. The roasted sweet garlic-brined Murray’s breast of chicken materialized moist and tender, atop Cheddar mashed potatoes and sauteed spinach.

A fat filet of striped bass upgrades the Long Island cioppino, acting almost as a coverlet for the risk-averse tomato broth that floats clams, mussels, local duck sausage and too much dull, dried corn.

The Most Righteous State Bourbon, from the Catskill Distilling Co., elevates the slightly sweet, marinated flat iron steak, in a cut as square as Colorado. The “dinosaur” bone-in short rib is an epic, unwieldy affair, flavorfully braised with Greenport Black Duck Porter.

The beefiness goes on with the house’s “signature” steak sandwich, a grilled number comprised of little logs of sirloin with caramelized onions and house-made steak sauce. But you can skip the dreary, smoked Cheddar burger. Ordered medium-rare, it may show up post-well done. A striplet of pork belly and maple-pepper ketchup are unable to revive it.

Crop & Kettle has a respectable list of beers on tap and wines, including a few locals. The bar also prides itself on an array of deftly crafted cocktails with a New York slant. The “smoked” Old Fashioned features Most Righteous bourbon, with its hints of vanilla, caramel, butterscotch and house-made orange bitters.

If you’re in the neighborhood, check in.