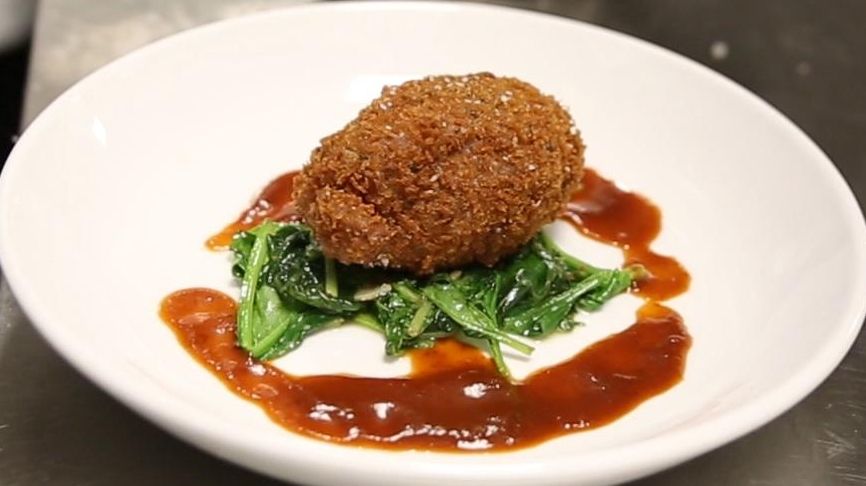 Chef Gregory Guidone of Crown Gastropub in Bellmore, on Thursday, Feb. 1, 2018, shows how he prepares a the Scotch egg, soft-boiled instead of hard, encased in sweet sausage meat, then fried, and set on sauteed spinach.  Credit: Yvonne Albinowski

There are more than 200 reasons to toast Crown Gastropub.

You’ll find most of them along a dramatic cabinet wall of spirits that runs the length of the place, devoted to exceptional scotch, Irish whiskey, bourbon and rye.

These helped define and distinguish Gerry McClorey’s Crown Steakhouse, which the gastropub succeeds. And they’re still here in the new space, a high-octane draw.

What has changed, but not too much, is the cuisine, with more pubby dishes. You still can order a thick steak at this inviting restaurant. And the tab will be a bit lower, too.

Crown Gastropub, however, does provide variety, in the booze and the food. That also comes via TVs tuned to sports and a soundtrack that leans comfortably to ’60s and ’70s music and lyrics.

The restaurant itself is no beggars banquet, but a warm, reliable neighborhood spot. The woody, streamlined space, with handsome, polished bar, looks unchanged from its previous incarnation. Service remains gracious and accommodating, whether you’re downing a soft drink or single-malt scotch.

After a beverage, start with a Scotch egg, here soft-boiled instead of hard, encased in sweet sausage meat, then fried and set on sauteed spinach. Pickles would complement this opener, which began as a snack. Pair it with the satisfying board of cured meats, Brie and fig preserves, which does include a few cornichons.

Ahi tuna tartare and guacamole arrive as a tasty, two-tone puck for a contemporary visual. Just as refreshing are an iceberg wedge salad and a special salad of spinach and goat cheese. New England-style clam chowder, however, spoons in dense and dull.

Be sure to order the jumbo Bavarian pretzel, with Dijon and whole-grain mustard. It’s good with a beer, and as close as you’ll get to any bread.

Witness, for example, the “cast iron burger,” served at the requested temperature, in the namesake pan, draped with thick strips of applewood-smoked bacon, a slice of wintry tomato, and bunless.

The braised beef short rib, ample and almost flaky, fits right into the repertoire, with mashed spuds and Brussels sprouts. If you dine on Sunday, choose chef Gregory Guidone’s perfectly cooked king cut of prime rib, a major slab of meat that needs only a little horseradish for company.

Crisp-skinned and juicy roasted Long Island duck benefits from a sweet potato puree and cranberry compote, plus a Cointreau-fueled gastrique that subtly cuts the bird’s richness. A pork tenderloin special also is recommended.

Other than the tuna in the appetizer column and the clams in the chowder, seafood usually is limited to the standby of grilled Atlantic salmon, though this one has a maple-teriyaki glaze and tomato couscous.

Whiskey-cured salmon might be more fun, given the surroundings. A dram of Dalwhinnie would be light enough to complement it. The Macallan always works with a steak, whether you’re fond of the 10 or 18 year. The crumbled blue cheese on the wedge salad could make you veer to Lagavulin 16 Year.

When you’re ready for dessert, there’s routine New York cheesecake. Or banoffee, the homey English pie and the pride of East Sussex, with bananas, whipped cream, toffee and a graham cracker crust from a family recipe.

A shot of Talisker 10 Year Old or Angel’s Envy Rye will do at this point in the festivities. But you’ll need a few more visits to make a dent in the wall. Cheers.