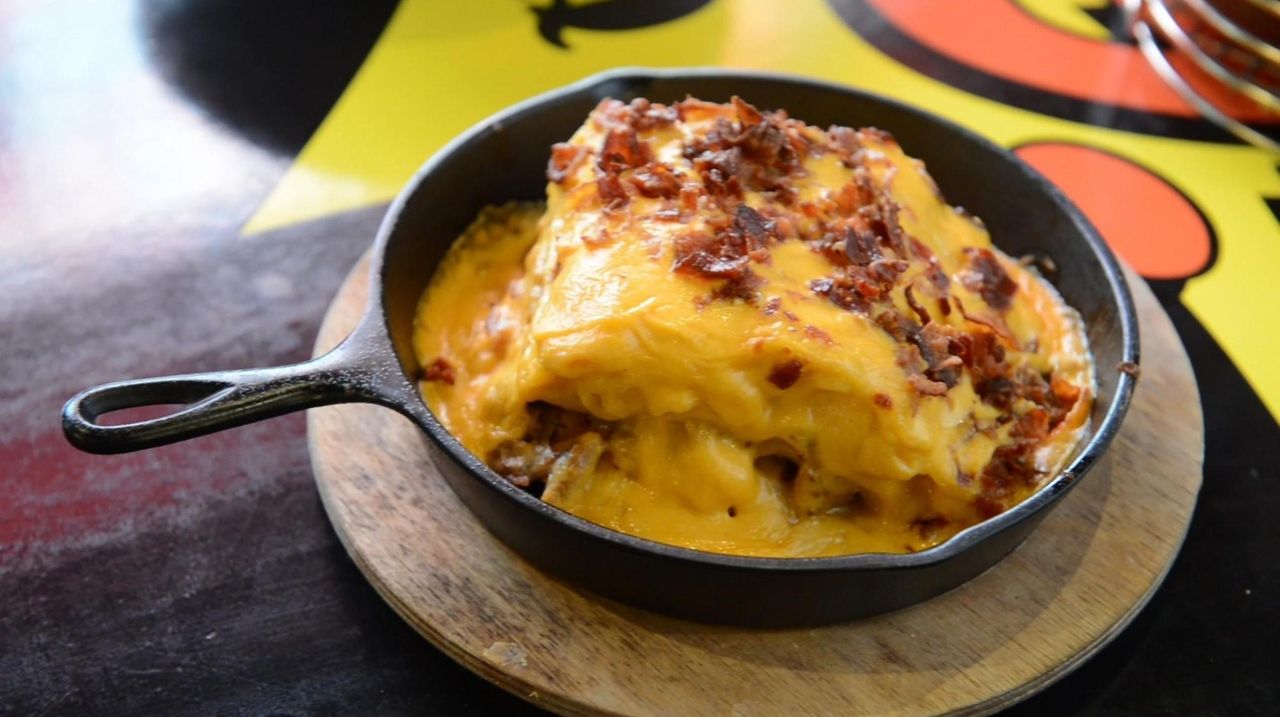 On Thursday, June 14, 2018, in Islip, Taryn Sheehan, co-owner at Dang BBQ, takes us through the process of one of their signature dishes, Mac and Cheese Lasagna. Credit: Daniel Brennan

AMBIENCE: A rec room decorated by the kids

Among the vintage signs and advertisements that cover the back wall of Dang BBQ is a sage observation that could serve as the restaurant’s motto: “That’s too much bacon said no one ever.”

Bacon makes guest appearances in the Jurassic Pork sandwich (along with pulled pork, macaroni and cheese, and baked beans), on the Garrett hot dog (with cheese sauce), in the BBQ chicken & bacon mac, and — in the form of pepper-bacon jam — in empanadas that are also filled with brisket and Cheddar.

At Dang, more is more. It is not the Island’s greatest barbecue, but it’s a great value, and endearing as well.

Dang was founded last August by Anthony Mastrantonio, ex-owner of Islip’s now-shuttered Port Royal Pub & Grille, and his daughter, Taryn Sheehan. Pitmaster Brian Chichester, formerly of One Block East, came aboard in January, and he knows his stuff. Ribs here are tender and tasty, if not overly succulent. Pulled pork is sweet, tangy and smoky in the right proportions. The best thing I ate at Dang was the brisket, thick, ragged slices of juicy beefiness. That was one night. Another night the brisket was thinly sliced and dry. There’s pulled chicken and grilled cutlets on the menu but no whole smoked chickens. They weren’t selling, said Chichester, so off they went.

Most of these creations are equal to the sum of their parts, and if the parts sound good to you, you’ll probably enjoy them. I’m constitutionally a purist but was nonetheless won over by the smokehouse mac & cheese lasagna. The mac is firm twists of cavatappi and the cheese is the kind of bright, silken sauce that requires Velveeta. (Chichester bumps it up with Cheddar, Parmesan and provolone). This, and a good amount of pulled pork, is stuffed between layers of lasagna noodles with smoked Gouda and Monterey Jack, topped with bacon and baked in a skillet.

I was also pleasantly surprised by the BBQ brisket salad, romaine topped with brisket, Cheddar, bacon, tomatoes and fried onion tanglers. Being able to actually toss this with the ranch dressing would have been nice, but no large spoons were available. (In general, implements are a challenge here; the only knives available are incapable of cutting through ribs, burgers or sandwiches.)

French fries have the potential for greatness. Always well burnished, one night they were so dark they took on a dangerous, bittersweet edge. But, unless you request them naked, the kitchen douses them with a seasoning made from the house spice rub plus sugar and salt, when all they need is salt. The same goes for the house-made potato chips. Even that brisket suffered under the heavy hand of the saucier. My advice: Ask for everything with sprinkle and sauce on the side.

I’d also advise against ordering the wan chili and the mushy tacos. I tried to keep a sense of humor when presented with the “dirt cake,” but this pile of standard-issue pudding with crushed Oreos and gummy worms was neither funny nor tasty. If you want something sweet, go for one of the trendy “super shakes” that go over the top and then down the sides of the glass. Such shakes leave me cold, but I had to smile at the description of The King, made with every available peanut-butter-and bacon-flavored ingredient: “This could have killed Elvis, or it may be what brings him back!”

Good humor infuses everything at Dang, the menu, the servers, the décor. Another of the restaurant’s strengths is value. Overstuffed as they are, most burgers and sandwiches cost less than $13, most of the classic barbecue platters are less than $16, and the $22.95 Dang combo plate, with three smoked selections plus two sides and cornbread muffins, easily feeds three people.

The best deal on the menu is the Animal House. For $49.95 you get a full rack of ribs, a pound of your choice of smoked meat, plus two large sides and four muffins. It’s more than enough for four, but if you can finish it yourself, it’s free — plus you get a Dang T-shirt and your photograph on the Animal House wall of fame.

So far, about a dozen people have tried to conquer the Animal House and all have failed. The challenge is on.