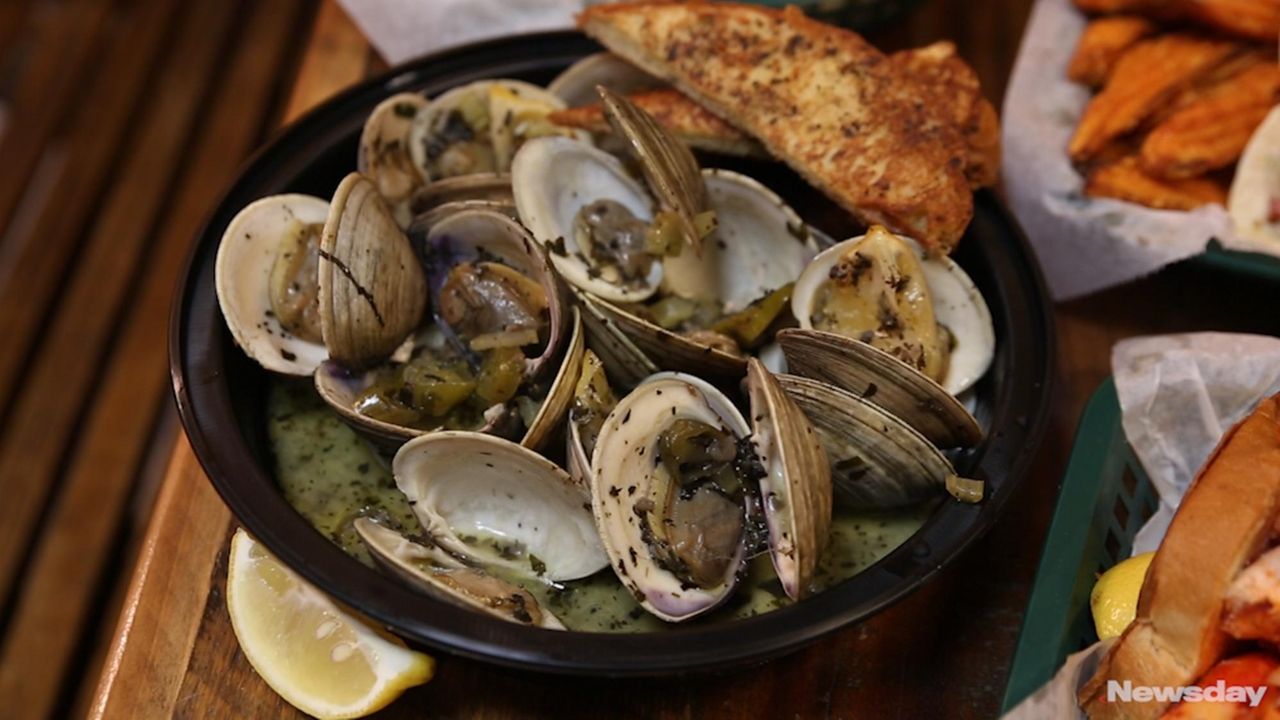 Paul Riggio, managing partner of DJ's Clam Shack in Wantagh, is trying to bring a taste of Key West to the south shore of Long Island.  Chef Jorge Galbez shows us how they make their signature dish: middle neck clams steamed with garlic, celery and jalapeño and served with lots of garlic bread. Credit: Yvonne Albinowski

The décor mixes the two as well. Lazy ceiling fans and corrugated metal wainscoting have a Floribbian vibe, while weathered buoys and an enormous two-man clam rake suspended over the counter suggest the less hospitable North Atlantic. Have a seat at one of the four tables or at a window-side stool that looks out over a stretch of Sunrise Highway whose only maritime note is the Lighthouse Diner across the street.

The original DJ’s was opened in 2009 by Long Islander Jeff Gagnon and Doug Bell, from Ipswich, Massachusetts. For the Wantagh location, Gagnon, also the longtime owner of Kingston’s Clam Bar in Sayville, tapped his childhood friend Paul Riggio to be the managing partner.

Riggio, a Wall Street refugee, is usually stationed behind the counter along with chef Jorge Galvez. There’s a small prep kitchen in back, but most of the frying, grilling and assembly goes on in full view of the dining room.

The eponymous clam (now there’s a good name for a seafood shack) gets a lot of love here. Chowder, made with middle necks (bigger than little necks, smaller than cherrystones) is luxuriantly creamy with big chunks of red potato. Middle necks are also used for a signature dish, steamed in a skillet with garlic, celery and jalapeño and served with lots of garlic bread. When DJ’s of Key West was on “Diners, Drive-ins and Dives” in 2014, this was the featured dish, and I concur with host Guy Fieri’s conclusion: “That’s the real deal.”

The undisputed stars of the clam show are Ipswich clams, fried whole belly clams (the soft-shell ones with gray-sheathed feet hanging out) that are nutty, sweet and briny in perfect proportion.

DJ’s also serves fried clam strips, previously breaded and frozen slices of enormous Atlantic surf clams. Almost free of mollusk flavor, they’re more about the fry than the clam. I also have to ding the baked clams, whose bready filling was sodden and not nearly clammy enough.

Were we speaking of clams? I believe we were. The clam shack of my dreams has two more items on the menu: freshly shucked clams on the half shell and steamed soft-shell clams (aka steamers). Riggio said he hopes to add one or both as the restaurant gets busier.

Fried calamari, available with marinara or kung pao sauce, are fine. But lobster rolls are stupendous. Made with big hunks of knuckle and claw meat and butter-griddled top-split buns, they are available either warm (dressed only with butter) or cold (blended with celery and tarragon-scented mayonnaise). Both are $17 and contain a full quarter pound of meat, but for sheer crustacean decadence, $33 will buy you an overstuffed lobster roll with twice the filling.

So much for the Northern specialties. From the South come conch fritters, fried balls of breading punctuated with peppers and, I suppose, some bits of conch. (Clams, you have nothing to fear from conch.) Shrimp are butterflied before their turn in the Fryolator, which gives them more surface area to crisp, but robs them of moisture and flavor.

I used DJ’s mahi mahi tacos to stage a contest between fried and grilled, and fried won in a walk. The greaseless fingers of fish were well served by slivers of cabbage and pickled onions and a Cajun mayo. You can get tacos filled with shrimp or, for landlubbers, chicken or roast pork.

Most dishes at DJ’s come with a side, and I’d go with either the coleslaw or the sweet potato fries. Regular French fries, not hand cut on the premises, were unworthy wingmen.

If the North won the savory battle here, the sweet one goes to the South. The only dessert on the menu is that great Key West specialty, key lime tart. DJ’s wisely gets the tarts delivered from Brooklyn’s vaunted specialist, Steve’s Authentic Key Lime Pies, one of a very few American bakeries that uses fresh-squeezed key lime juice in the filling. Can I say that it left me feeling happy as a clam?