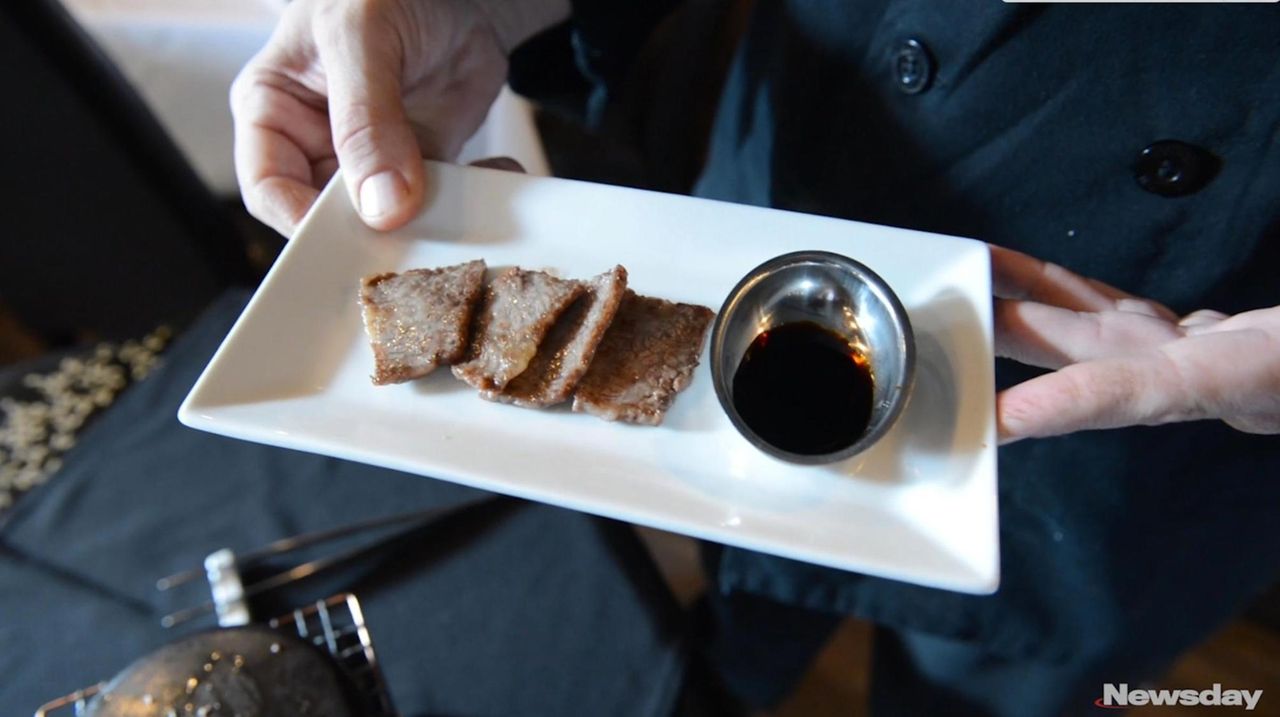 SERVICE: On point, but occasionally overbearing

AMBIENCE: Cozy, polished bistro, with a handful of tables and a fireplace

As far as restaurants go, steakhouses are as indigenous as can be to New York, tracing their roots back to the frenetic, smoky chophouses of 19th-century Manhattan. Back then, servers screamed orders such as “Three beef, 8!” and chops flew from kitchen to booth with a speed approaching light — and you ate them just as quickly.

The pace may have slowed over time, the experience become more finely tuned. However, some hallmarks have remained unchanged. At Emanuel’s, which opened in Northport earlier this summer, you’ll find a few: A dining room cast in moody tones, with white tablecloths and a fireplace. A wine list sagging with gutsy reds, especially cabernets (the markup is low here, so go to town). And a menu of classic steakhouse dishes: lobster bisque, a giant crabcake, and plenty of seafood and meat — including a surfeit of wagyu beef, a 21st century fixation.

Yet Emanuel’s is tiny — about six tables, and a bar — and tucked away, in a row of shops along Route 25A. It’s named for its chef and part owner, Emanuel Karropoulos, a Culinary Institute of America grad who, years ago, was a chef at an early iteration of Northport’s Bistro 44 (then called Bayview Bistro) and has worked extensively in catering. One stint seems to have left a lasting mark: From 2014 to 2015, Karropoulos was the executive sous chef at Blackstone Steakhouse in Melville. Consequently, those familiar with that place may have a sense of deja vu at Emanuel’s, in dishes such as lobster bisque or flapsof wagyu seared on hot black stone.

Is Emanuel’s a steakhouse in miniature? Sort of, but it also feels like a bistro, one still finding its groove. Since the bar still lacks a full liquor license, it has a slightly forgotten-to-time vibe, one reinforced by the Reagan-era cool jazz piped into the dining room. However, when bread and a pretty butter plate arrive — dotted with chestnuts, dried figs and olives — this chef’s artfulness begins to make itself known. In his best moments, Karropoulos has an uncanny sense of balance: For instance, a lobster bisque that’s just creamy enough, with a hint of sherry and a generous trove of meat in the middle, or in an appetizer of house-rolled spinach gnocchi, slicked with a Roquefort-spiked cream sauce, that tastes almost hedonistic but still leaves room for more.

Wagyu beef makes several appearances, including as filet strips rolled out on a cart then dramatically seared to order on a piping-hot stone. On their own, they’re kind of bland; when dipped in an accompanying hoisin sauce, overwhelmed by salt. In a similar predicament were littleneck clams prepared oreganata-style; the little guys were sweet and tender, but too petite to really carry the weight of breadcrumbs and bacon.

The kitchen sometimes seemed challenged with timing. That gnocchi, so slurpable during one visit, were lukewarm on another, arcing toward rubbery. The gorgeously presented “colossal” crabcake tasted uber-fresh, but was stone cold at its core. A hunk of roasted halibut over farro, an entree, was parched, a condition unsalvageable by a finger-lickin’ noisette sauce.

And a $75, 14-ounce, American-raised wagyu strip steak, ordered rare, arrived a terrible shade of brown, abused by fire. Our server took it back without question and told us it was the last one available.

That wagyu is one of two entree-size steaks on the menu. The other, the elephantine porterhouse for two, is a weapon of a steak aged (elsewhere, for 28 days) and given a crackling, peppery crust during searing. The smaller tenderloin was left rare and the strip, lurking under a cap of fat, medium-rare. Each side was supple, and the plate was hot enough to keep cooking to taste. It also cost about $20 less than similar renditions at larger places.

Karropoulos is especially deft with vegetables, sending out bouncy, well-composed, spice-dusted salads or on-point sides such as button mushrooms packing an umami wallop or baby carrots roasted into caramelized gloss. This made the pallid tomatoes served with a tomato-burrata salad kind of puzzling — and inexcusable, really, at the height of summer.

The chef makes his own desserts; go for the warm, crunchy doughnut holes, served with whipped marscapone and strawberry jam.

When its running on all cylinders, Emanuel’s has poise — warm, cosseting service and perfectly composed dishes — but when the kitchen comes up against the inherent restrictions of scale, the road can be bumpy.

54 LI spots for fine diningNewsday's latest fine dining reviews. Long Island's 10 best bistros of 2019These top spots can be counted on to deliver a stellar meal in laid-back surrounds. LI's 10 best steakhouses of 2019What you can enjoy at several of these steak spots goes well beyond beef.