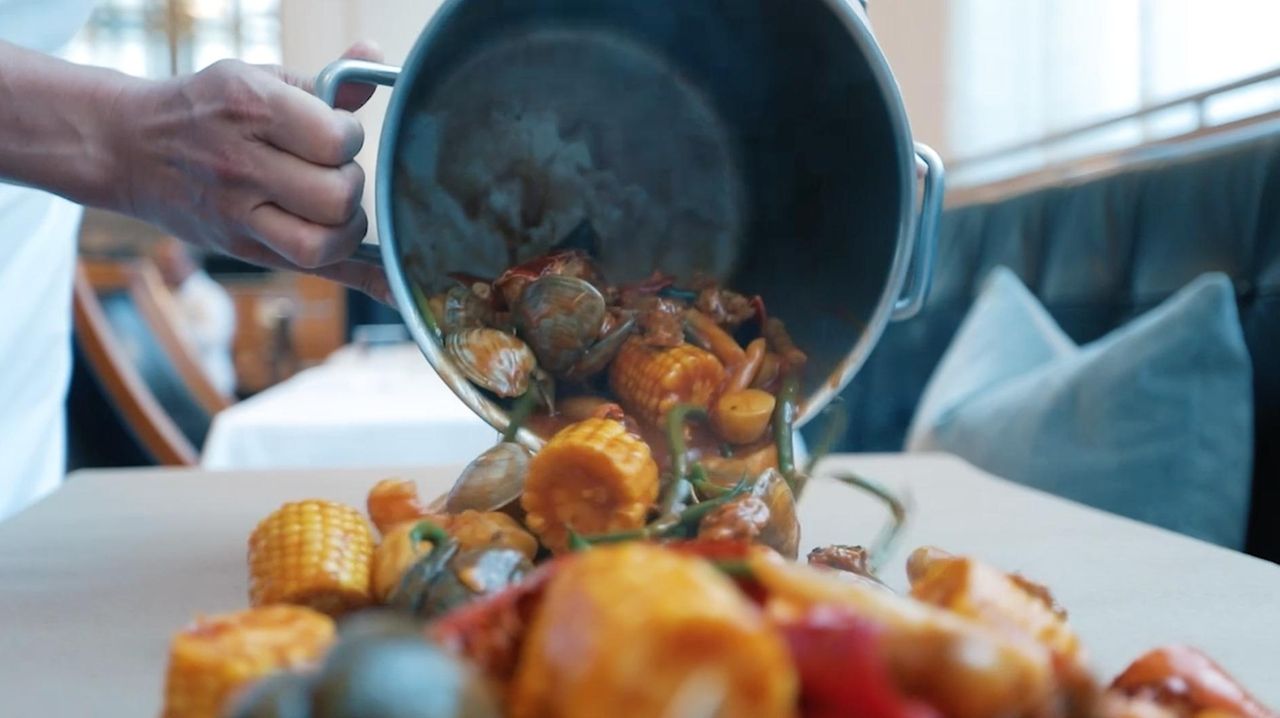 Daniel Humm, the meticulous chef behind Manhattan's Eleven Madison Park, one of the most celebrated restaurants in the world, is relocating his operation to East Hampton starting June 24, 2017, while the mother ship is being renovated. Top on the menu of the pop-up EMP Summer House, at 341 Pantigo Rd., is a lobster boil with special spices.  Credit: Newsday / Raychel Brightman

When Daniel Humm set out to create a lobster boil, no detail was overlooked, right down to the spice mix he uses to dress the feast that celebrates the catch of local waters.

For the meticulous chef behind Manhattan’s Eleven Madison Park, one of the most celebrated restaurants in the world, this means a desert-toned spice mix that includes ground fennel, rice vinegar powder and three kinds of pepper, adding notes of sweet, smoke and spice. It was months in the making.

It is sprinkled over the boil right after it is attentively dumped on the table, specks finding their way to brown butcher paper, arguably a liberal representation of the beach, but also a savory blend of flavors that adds an addictive kick to the lobster, clams, corn, spicy Italian sausage, potatoes and, really, just about anything it touches.

These are summer interpretations Humm and his staff have been tinkering with in their Manhattan test kitchen as they set to open EMP Summer House June 24 in East Hampton.

The pop-up restaurant, which has taken over the old Moby’s space for the next 10 weeks, is one of the most anticipated of the Hamptons summer dining season. It is an experience that comes with high expectations Out East, where inconsistency has historically been a problem when the quality of help in the kitchen and dining room is seasonal.

EMP will not have any such constraints. The restaurant in large part came to be because Humm and partner Will Guidara were looking for ways to keep their team in place while Eleven Madison Park undergoes a four-month renovation that began two weeks ago.

“We can have the most beautiful restaurant afterward, but if we don’t have our team still together, we have nothing,” Humm said.

The two have brought their staff, about 120 people, to Long Island for the summer with the help of American Express, which is partnering on the project and has exclusive rights to control the experience. The only way to get a reservation at EMP Summer House is by reserving with an Amex card, and with a few exceptions where cash is allowed, it’s the only way to pay.

Reservations have been released on a rolling basis and the last round will be unleashed July 1 for tables from Aug. 16 through Labor Day, the day the restaurant wraps up and returns home. There’s also a waiting list on the EMP website for days that are sold out (empsummerhouse.tocktix.com)

There are multiple ways to dine. In the main dining room, where seafood is the focus, fluke becomes ceviche, clams join bacon and corn on wood-fired flatbread and a bouillabaisse- for-two pairs local black sea bass with prawns, squid, fresh fennel and saffron. Outside, there is a covered patio where you can reserve for the lobster boil or a fried chicken dinner, but also a more casual drop-in backyard where there will be sandwiches such as fried fish, cheeseburgers, lobster rolls or fried bacon-wrapped Hebrew National hot dogs topped with black truffle mayo and celery root relish. It’s the same one served at one of Humm’s other Manhattan restaurants, The NoMad, and on his food truck in Los Angeles.

For Humm and his team, EMP Summer House is a return of sorts.

It wasn’t until a few years ago, during a trip to harvest salt in Amagansett, that the chef tasted his first lobster boil.

The Swiss-born chef had closed the Manhattan restaurant that weekend and bussed more than 100 employees, from chefs to servers, to Amagansett Sea Salt to collect salt from the waters off the Long Island shore.

That night, owners Steven and Natalie Judelson, dug a large hole on the beach, lined it with newspaper and hot coals, and baked a meal including lobster, clams and corn.

“When the food was ready, we all sat down at a long table and the seafood was poured right in front of us. It was messy and rustic, but the communal nature made it feel like family,” said Michael Pyers, who is part of the restaurant’s culinary and research development team.

Humm and Guidara wondered why they couldn’t do this.

“For me, I’d never seen this before,” Humm said. “To me, this was new, and it was very much of this region. It’s something of this place. The foods that have a tradition and a history of a region are very exciting for me.

“At first I was sitting out there, and I’m like wow, wouldn’t it be cool if we could at Eleven Madison, one of the courses we just dump food and that’s your course,” he said. “We always want to surprise people. We want to give people what they’re not expecting, because I think that’s the great moments in a meal, when something happens unexpectedly. No one expects you here to have food dumped on the table.”

After months of planning, the lobster boil quietly showed up on a tasting menu. Special boards had been carved for dumping the shared dish on white cloth and lots of practice runs were made to get the experience just right for people spending hundred of dollars on a meal.

If the beach version was rustic, and the Eleven Madison interpretation was polished, then the one at EMP is something in the middle, serving groups of six to 12 people at butcher paper-covered picnic tables, with family-style plates of house-baked parkerhouse rolls and two salads, including a strawberry-and-tomato mashup that is dotted with almonds. Lobster is the main focus of Humm’s boil, but the rest of the seafood will vary based on what’s available including prawn and clams along with potatoes, corn and beans of the moment.

Nothing is left to chance, especially when you’re paying $125 a person. Each component is first cooked separately. The corn in just water and salt. The shrimp in a similar bath that also includes dill. The clams are steamed open in a white wine broth.

The lobster plays double duty. The tails and claws are poached, and mostly dislodged from the shell, so diners have to do nothing more than give them a slight tug and eat. The rest of the shells are cooked into a stock that is used for a complex sauce that is bolstered with tomato, beer and a host of herbs and spices before it is strained and thickened.

When it’s time to serve, the separately cooked meat and vegetables are heated through in the sauce. The entire mixture is then transferred to a decorative stock pot, dumped on the table, dressed with fresh herbs, the sea salt and finished with spice mix.

Humm is still undecided on whether to offer bibs, but with much of the work already done for you, he thinks they’re probably unnecessary when all you have to do is dig in with your hands and eat.

WHAT’S THE BIG DEAL? Eleven Madison Park, one of the world’s best restaurants, is moving from Madison Avenue in Manhattan to East Hampton for the summer.

WHO’S THE BIG NAME? Swiss-born chef Daniel Humm is letting his hair down (a little) with a refined version of a lobster boil that is served dumped on a picnic table outside.

ANYTHING ELSE TO EAT? There will be hot dogs wrapped in bacon, deep-fried and topped with truffle mayonnaise and celery relish. And a full menu of Humm summer specialties.

WILL IT COME AND GO? The summer pop-up will be on Long Island for 10 weeks while the mother ship undergoes a renovation. The restaurant is closed on Wednesdays for a staff beach day.

HOW DO I GET IN? For the privilege, you’ll need an American Express card to make a reservation. The credit card company is bankrolling part of the project.

Chef Daniel Humm and his staff spent months working to come up with the right balance for a spice blend that would add some perk to the lobster boil they’ll be serving at EMP Summer House in East Hampton. In the end, it’s a savory mix of flavors that can be used to add a little punch to just about anything it touches. It works well with most seafood, but also grilled chicken, buttered pasta and popcorn.

1. Toast the black pepper, celery seed and fennel seed over medium-high heat until spices are fragrant. Transfer to a bowl and let them cool for about a minute. Transfer to a spice grinder and grind the toasted seeds to a fine powder.

2. Add to a bowl and mix well with the remaining ingredients. Transfer the spice mix to an airtight container and use liberally. Makes 1 cup.