Estias Little Kitchen is a local favorite for breakfast, lunch and dinner, at a table or at the counter, surrounded by art and close to the kitchen from which friendly aromas of home-style cooking emerge. Credit: Photo by Daniel Gonzalez 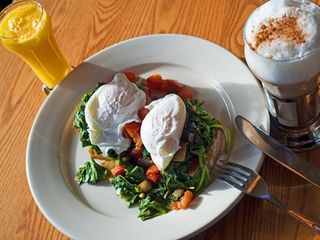 It's been a few years since Colin Ambrose, chef-owner of the successful Estia in Amagansett, opened Estia's Little Kitchen, a charming cottage on the outskirts of Sag Harbor. Like its older sibling, the restaurant offers breakfast and lunch in coffee-shop surroundings and, come evening, is transformed into a white-tablecloth hideaway.

Here, the chef uses impeccably fresh fruits, vegetables and herbs, most grown in the Amagansett restaurant's garden. At breakfast, light buttermilk blueberry pancakes burst with berries that taste just-picked. An omelet called the East Ender, made of egg whites, onions, mushrooms and feta cheese, is plump and assertively flavorful.

It's difficult to neatly tackle the crab and avocado Napoleon, made with crisp tortilla layers sandwiching cumin-spiked hummus and spiced crabmeat, but the combination of flavors and textures makes it worth negotiating.

You'll have no trouble with Ambrose's divine roasted chicken, a bird that's boned, pan-roasted and finished in the oven, imparting the best qualities of both fried and roast chicken. On the side are fluffy mashed potatoes plus vibrant sauteed snap peas and carrots. Chicken Bolognese over house-made pappardelle tastes herbal and authentically Italian. Linguini with clam sauce, a winning spin on a classic, is made with bacon and lots of fresh littleneck clams.