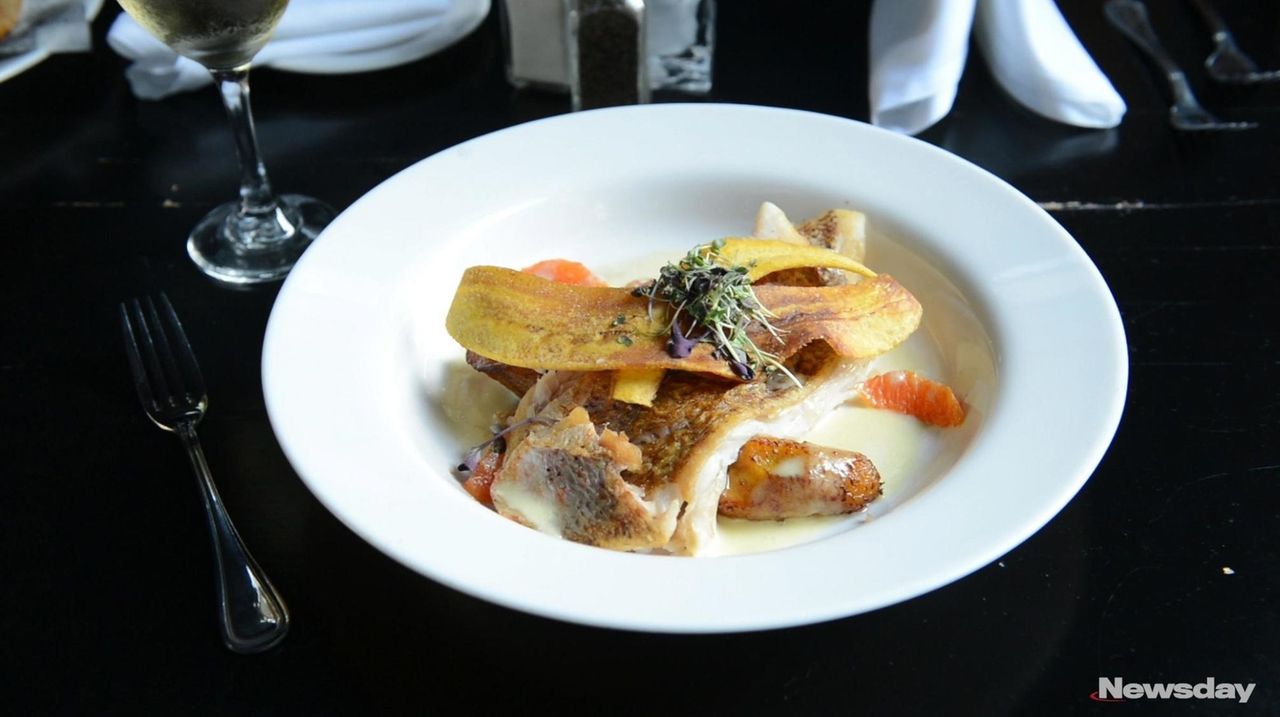 Chef Michael Meehan of Finley's Seafood in Huntington shows us how he prepares his red snapper with plantains, on Thursday, June 7, 2018. Credit: Daniel Brennan

Michael Meehan has collected enough restaurant stars to form his own constellation.

The chef’s latest kitchen is Finley’s Seafood, a fish house in the New England tradition but, as you’d expect, with contemporary twists.

So, there’s a lot going on here.

The site is divided between the popular bar and the remade restaurant. When you enter, turn right for dining out, left for drinking in. The rightward room now is decorated with suitable images and models: a blue crab, fishing boats, a compass, a mermaid. There’s plenty of exposed brick; a pressed metal ceiling; artful window tops that still hint of the French Quarter.

This is Meehan’s third ongoing establishment in downtown Huntington. He’s chef-partner both at Vauxhall, a gastropub devoted to burgers, poutines, beers, cocktails and Morrissey; and at Radio/Radio, a Southern-style spot that highlights Memphis barbecue, tacos, po’boys, chicken and waffles, and Elvis Costello.

They’re next to each other on Clinton Avenue, a couple of blocks north of Finley’s. It’s a route that Meehan briskly must take many times a day.

Meehan knows how to navigate. Here, the destination is informal and easygoing.

They’ll prep you for a bowl of plump, steamed mussels finished with Narragansett lager, a confit of tomatoes and cuts of chorizo; and the tasty crabcake, with roasted corn salad and a broad brushstroke of pickled pepper sauce rémoulade.

Refresh yourself with the ceviche of shrimp, sparked with jalapeño, though the ceviche is set on a tortilla that rapidly loses crispness. Buttermilk-fried calamari also lacks crunch. The seafood chowder takes in shrimp, crab, hake, potatoes, corn and parsley. But it’s on the thin side and a bit underseasoned.

Meehan prepares an appetizing, though not exactly overstuffed, lobster salad roll, bound with a subtle, lemony mayonnaise, flecked with celery, served on a split-top bun that’s not deeply bisected. Old Bay potato chips are the apropos foil. His version of fish and chips arrives perfectly crisp, with snowy, flaky cod in tempura batter, fine fries on the side. All you’ll want is a bottle of malt vinegar.

Wasabi pea-crusted seared tuna — rare, velvety and neatly sliced — is flanked by a slick of red pepper hummus and a coulis of piquillo pepper. Local John Dory, delicate and flavorful, swims by in tomato broth with baby spring onion and edamame. But the rounds of Yellow Finn potato are undercooked.

For the seafood-averse, an alternative is steak frites with an Argentine rhythm. The juicy skirt steak benefits from cherry-tomato salsa, husky yucca fries and chimichurri.

The cookie-in-a-skillet dessert improves on a pasty, muffin-like raspberry-coconut bread pudding. Chocolate cake will do, along with ice cream. No strawberry shortcake or Boston cream pie, yet.