You’ve made it to summer without losing your mind. Congratulations! Having endured 2020’s June, July and August by taking refuge indoors and dutifully shaming devil-may-care crowds in Daytona Beach, Lake of the Ozarks and such, you have earned the right to a season like none other. And if you’re like me, last year’s summerless summer only rekindled an appreciation for the hot months, stoked a desire to make up for lost time and left you daydreaming of fantastic voyages of reacquaintance with Mother Nature.

Like, say, traveling the entire length of Fire Island on foot in search of fine food and drink.

Your questions, all of them valid: In what sense is that voyage fantastic? Why didn’t anyone talk you out of it? Shouldn’t some lockdown fantasies remain just that?

Yes, there are easier ways to reestablish connection with the great outdoors. After walking just a third of the impossibly skinny barrier island—an 11-mile stretch from Robert Moses State Park Field 5 to the Pines—I was flagging down passing deer and begging for a ride to the nearest water taxi. But by then I’d also visited several eateries and drinkeries well worth a diner’s attention and acclaim, and even though the following itinerary is not for everyone, for a certain type of food-lover (equal parts hardy and foolhardy), there may be no better way to spend a day. Especially if you’ve enlisted the help of a friend or family member who thinks you’re nuts but still volunteers to reunite you with your car at the end of the journey.

Start by feigning superiority over the millions who, unlike you, have neither the sense of adventure nor fortitude to enjoy Fire Island (where cars are mostly banned) without the aid of a ferry. Then, contradict yourself by parking as far east as Robert Moses will allow and set out on foot, skirting the lighthouse and hitting the open road—Burma Road. That this sandy slog is named for a famously rough and dangerous mountain passage (for context, see the 1943 B-movie "Bombs Over Burma," starring a luminous Anna May Wong) is your first hint that today will not be a walk in the park.

Still, this mile-long hike will not turn you into Reese Witherspoon in "Wild" just yet. Twenty minutes later, you’re back on pavement in the charming hamlet, boho haven and 19th-century cholera quarantine site known as Kismet. There, The Kismet Inn has been ladling out dollops of seafood comfort since 1925, and an order of baked clams—in which a garlicky-breadcrumby-mollusky filling is generously scooped into three quahogs and broiled to a crunchy char—is a must. The inn’s lobster roll and fried shrimp sandwich are determinedly no-frills, and its wooden deck is too, an outdoor area so pleasant you’ll wish you could tarry. You can’t tarry. You must press on.

Continue along Lighthouse Road for 20 minutes until street turns to gravel turns to sturdy boardwalk on the way to Saltaire, a tony town with a towny tone and an affection for slate-gray shingling. When you reach Broadway (don’t get excited, it’s just a planked path), head left to the genteel, overachieving Saltaire Market. While it may function as a lifeline for townsfolk in need of essentials both forgotten and crucial (e.g., margarita mixers, more varieties of Tate’s cookies than you thought possible), better provisions may be found in the store’s deli and baked goods area, a great place to pick up house-made muffins, coconut banana bread and apple cider doughnuts, along with grilled sandwiches and wraps. Not hungry? Repair instead to the market’s large, picnic-tabled patio area and rest your feet for what’s coming.

What, you say you are hungry? Trek a mile east to Fair Harbor, a self-described "barefoot community" that nonetheless boasts a natty sit-down restaurant, Le Dock. That Frenchified name is odd, given the bistro’s Greek fishing village vibe and Italian-heavy menu, but le quai doesn’t disappoint. Most pasta dishes are a joy, as are the fish selections and the strictly-when-available stone crabs with mustard sauce, lobster tacos and refreshing frosé cocktails. The last is a boon, albeit of a short-term variety, and you’ll no doubt be tempted to order a second. Don’t do that. There’s walking to do. Also, there’s another cocktail waiting just a quarter-hour away.

To find it, follow Fair Harbor’s ramrod-straight main artery through the foodless Dunewood into similarly quiet Lonelyville, where all you hear are chirping birds and the sea, and all you see are 8 mph speed limit signs and flyers for Hair by Marcia. Try to follow the path even as it turns to sand. What you are looking for is an unmarked bar called The Shack on Central Walk, which is also unmarked, in Atlantique. It’s just an errant Frisbee throw from the beach and sits adjacent to a small concession stand, the tiny community’s only other source of sustenance. Pretend to seriously debate which establishment to patronize, then scrape up a barstool for a mind-clearing Rocket Fuel cocktail, or enjoy refreshing Hurricanes at a picnic table on the sand, all the while eavesdropping on The Shack’s colorful regulars, who, in a neat bit of symmetry, live to gossip about eavesdropping intruders.

Perhaps by this time you are craving the cosmopolitan bustle of a real metropolis. If so, you are on the wrong island. Ocean Beach is the closest thing, and it’s not close by any measure. The 30-minute trek, over narrow, beach pea–lined trails of sand will have you waxing nostalgic for Burma Road, especially when trucks or service vehicles happen by. Escape them by scampering to the nearest turnout. (Do not, under any circumstances, take refuge in a dune. They’re the island’s first defense against waves and wind, and as zealously guarded as a boat slip on the Fourth of July.)

The deepest sand is found, wouldn’t you know it, just before town is reached, the threat of heat exhaustion is at its highest and you’re actively considering where you want them to find your body. Then, suddenly, civilization appears, along with the many food and drink opportunities that come with it. On Evergreen Walk, the 15-year-old Castaway Bar & Grill has just taken up residence in the former home of Bocce Beach, owner Jon Randazzo having unseated the giant red boule outside while smartly and elegantly designing a dining room with teal banquettes, wicker hanging lamps and gentle paddle fans. There, chef Keoni Dix’s scallops over udon noodles will leave you swooning, while his barbecued shrimp splashing in a coconut curry puddle will leave you begging for extra bread. Also notable: a large steak sandwich (feeds two) and a ginormous fried chicken sandwich with garlic aioli (three smallish people). 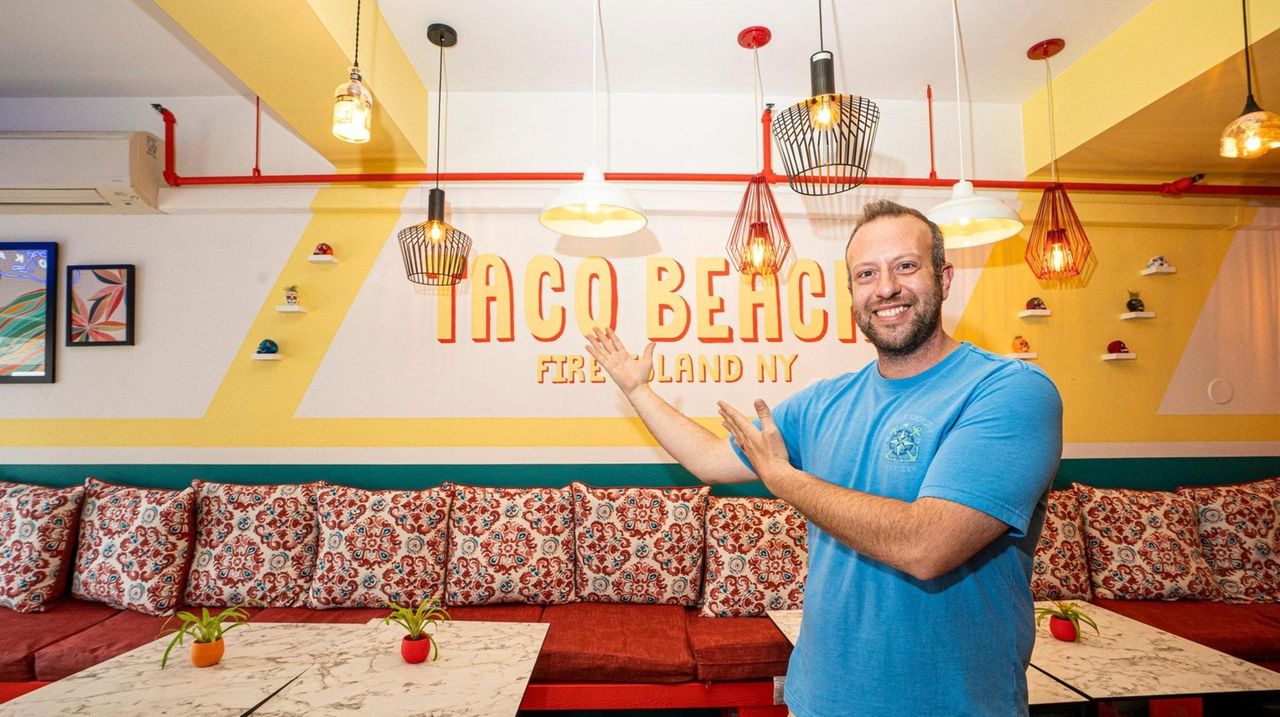 Not new—and proudly so—is Matthew’s Seafood House, where Cobb salad comes with shrimp, lobster, Gorgonzola cheese, bacon and a formidable fan base of undying loyalty, although fresh fish choices (think sole, halibut, salmon) are a good bet, too. Nothing partaken from dockside tables, however, could possibly match the views. The sunsets, in particular, are breathtaking and mandatory for all save those who feel obliged to keep moving.

Twenty minutes away is Ocean Bay Park, the smaller of Fire Island’s Twin "Cities" and home to Flynn’s, which since 1937 has meant a good night out for lovers of docking-and-dining, and, more recently, young folk eager to hook up. Both constituencies tend to leave happy. Bar food may be your best bet, and while the kitchen sings a familiar burger and spinach-artichoke-calamari-wings-baked-clams tune, it does so with gusto. Even more impressive is the bar’s sweet and deceptive Rocket Fuel, a cocktail that Flynn’s claims to have invented, although its authorship is disputed by island scholars and lushes alike. From there, continue walking east till you reach the church at Point O’ Woods, where it might be prudent to stop and pray for sur- viving the day. You’re heading into the most challenging part of a heroic journey, an hour-long trial as you make your way over concrete and boardwalk but mostly sand to the Emerald City, which is how many residents of Cherry Grove think of their hamlet, owing to its beauty and numerous "Wizard of Oz" fanatics. Along the way, face those doubts and fears as you enter the Sunken Forest. This involves taking the longer, avoid-tolls route to the Grove, but one with boardwalks. As they swerve left and right, up and down, you will encounter flora of unearthly, unimaginable beauty. Despite that stone marker calling the forest a "retreat for refreshment of the human spirit," no actual refreshments are served.

The gaslighting continues when you reach Sailor’s Haven, which contains no actual sailors or much of anything else, but take heart—from there it’s just another half mile to Cherry Grove via cement and board. Upon arrival, make a beeline for Cherry’s on the Bay, where there’s even more unearthly, unimaginable beauty than in the forest, at least during evening performances by Hedda Lettuce, Tammy Spanx, Boudoir LeFleur and other drag favorites. Dine under the Big Top—seriously, it’s a circus tent—and feast on Cherry Lane’s Famous Seafood Bucket (shrimp, mussels and clams in a white wine broth) or perhaps pickles tempura. (I know, but try it.) Elsewhere in town, if it happens to be martini time, which is most of the time in Cherry Grove, grab a table at The Island Breeze for one of Octavio Mendez’ memorable-and-that’s-putting-it- mildly cocktails from the bar.

By this point, if you’ve somehow managed to find a second (or third) wind, embark on the journey’s final leg, a 30-minute "Sands of the Kalahari"–inspired trek to Fire Island Pines. This is a community that struggles, but mostly succeeds, at striking the proper balance between gentlemanly decorum and size-skimpy Lycra garments, which is half- ironic, as the Pines also plays host to the Bistro and Martini Bar, one of Fire Island’s dressier boîtes. Surviving an 11-mile day like this, assuming you have survived, merits conspicuous carb consumption, and this restaurant fills the bill with earnest takes on penne à la vodka, spaghetti carbonara and other pasta faves that are hearty enough to have you booking passage on the next available LifeFlight.

Alternatively, hobble madly to the dock where a last-copter-out-of-Saigon rescue awaits. They call it ... a ferry. Swallow your pride, apologize for previously demonizing the vessel, and chug away with many fond memories of the day, not to mention rollicking tales that will amuse friends and podiatrist alike.

Not everyone is game for an entire day of walking—especially if you want some beach time or, yes, that second cocktail. (No judging!) To travel to, from and among various Fire Island communities, visit fireislandferries.com for ferry and water taxi information.

Explore the new issue of Feed Me MagazineTake on the ultimate Fire Island foodie crawl, grab a bite at one of LI's marinas and discover the charming village that's perfect for summer dining. 2 new Fire Island restaurants debut in Ocean BeachJon Randazzo has opened a hip new taco spot and revamped a second eatery, moving to a larger space and hiring a new chef.