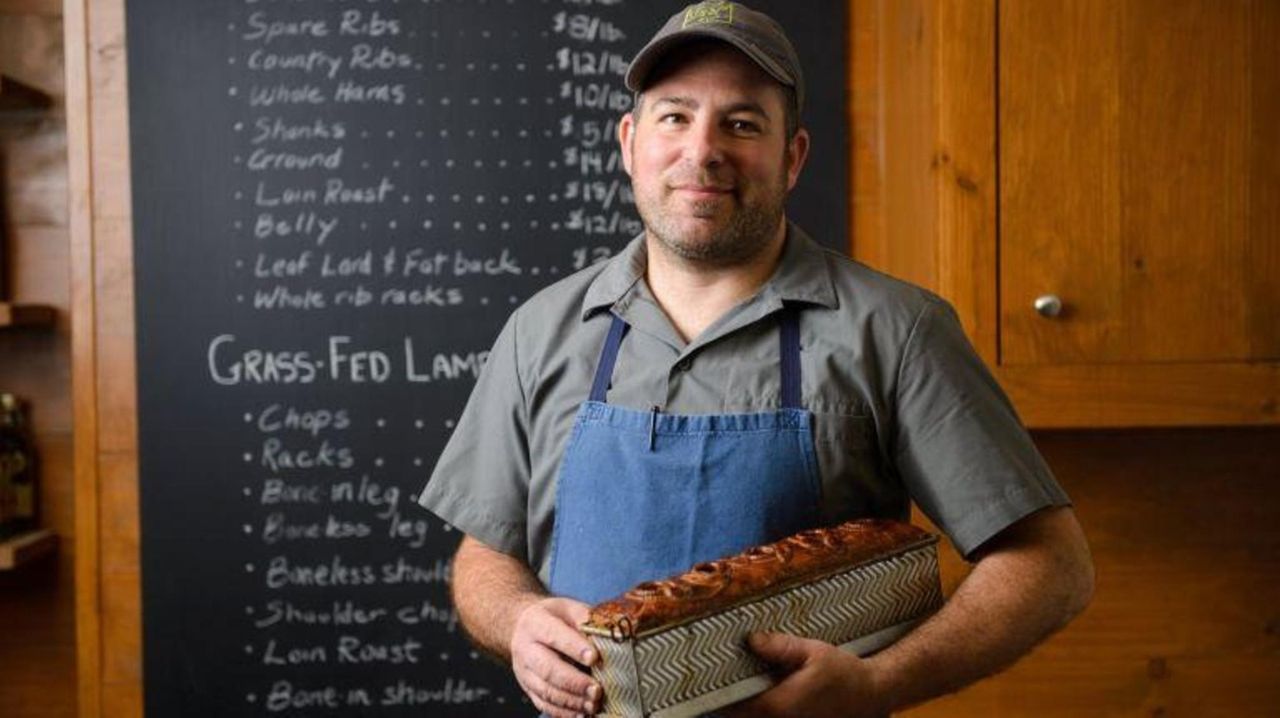 Stop by 8 Hands Farm on a Monday and you’ll find Julien Shapiro feverishly putting the final touches on the upcoming week’s pâté en croûte, a painstakingly detailed process of crafting French charcuterie. It’s a 500-year-old craft he calls the “crown jewel” of his North Fork butcher shop and which he has spent nearly a decade working to master.

Chicken livers and pork trimmings, marinated for days in brandy, have been pureed with heavy cream, studded with dried fruit and nuts, and seasoned with salt and spices. The mixture has been elegantly layered inside brown butter pastry with pork tongue and heart, and brushed with an egg wash. As the loaf bakes, the crust develops a golden sheen. By day’s end, little chimneys built in its dome to release steam will be ladled full of aspic, a savory jelly that fills the tiny gap Shapiro has left just under the cap. The flavors will settle before the en croûte is placed in the meat case in time for the weekend.

Each slice reveals a pastry-encased piece of meat mastery: jelly on the top of perfectly pink meat that is bedazzled with fruit, nuts and dark hunks of hearty tongue and heart.

“For me, this is sort of the high-water mark of charcuterie, and cooking, because you have to get the pastry right, the . . . meat right, the jelly right and the cooking right,” says Shapiro, 8 Hands’ butcher and resident charcuterie maker. “It’s a lot of fun.”

It’s also not for everyone. At 43 years old, Shapiro has decided to make Old World butchery and charcuterie assembly his career after more than two decades working his way through kitchens. On this 28-acre farm on a tiny street in Cutchogue, he is a world-class practitioner of a dying art form that is rarely practiced on Long Island, and is rare even in the city, using every piece of the animal, from nose to tail. You hear of places making this claim, but nearly none are true professors that go to Shapiro’s level of detail.

The small, sustainable farm, situated on lush pasture land, is where heritage breeds of pigs, sheep and chickens, whose roots trace back to places such as Iceland and England, spend their lives. After they are slaughtered, Shapiro ensures none of their parts go to waste, right down to a pig’s skin, which becomes puffy pork rinds, and bones, which become stock.

Each week in the farm kitchen, which opened in October, he begins separating cuts desired by home cooks — chops, ribs and shoulders — before the artistry really begins. He turns what remains into sausages, bacon, pancetta and cold cuts, and a host of pâtés including the en croûte for the butcher shop and a food truck outside that is open on weekends.

The journey from Wading River

Getting here has been somewhat of a circuitous journey for Shapiro. Born in Denmark and raised in Wading River, he went to college in upstate Buffalo, where he studied art history that, he admits, “really didn’t take me anywhere.”

Shapiro had always been passionate about cooking. He also has French citizenship (his mother is from France) and speaks the language, so he applied to cooking school in Paris and was accepted. But he soon dropped out and began working in restaurants, making his way from France back to the United States.

He moved around kitchens from San Francisco to New York and finally Washington D.C., where he was inspired watching former White House chef Frank Ruta cook a version of pâté en croûte at the now-closed Palena.

“Julien is a little different,” said Ruta, who still works in D.C. “He should have been born in the ’30s or something. He has a solemn mind set to the classic repertories. He has an extreme amount of respect for the classic repertoire and his just happens to be charcuterie. I think that’s what sets him apart.”

In 2011, Shapiro moved back to Paris, where he apprenticed at the world-renowned restaurant Gilles Verot, learning charcuterie and building his butchery skills under the legendary Hugo Desnoyer.

A year later, his training led him to compete at Championnat du Monde de Pâté Croûte, the premiere pâté en croûte competition in the world. He is thought to be the only American to date to have participated in the competition. At the championship, he made his charcuterie with squab, gin-soaked currants, almonds and lime. The judges gave the dish a lukewarm reception, telling him that while his pâté en croûte was good, “those are not flavors French people like.”

Back in D.C., Shapiro grew tired of city life and wanted to take his education a step further, learning about the animals he was butchering. The opportunity came two years ago at 8 Hands, after he returned to Long Island to help the late chef Gerry Hayden run the kitchen at North Fork Table & Inn in Southold. It’s there he met Tom Geppel, the owner of 8 Hands Farm and a tax accountant for PricewaterhouseCoopers. Geppel, who has a culinary background, was on his own mission to raise better animals.

“My vision was always to get the farm store, to be able to butcher meats and have a food truck up and running,” Geppel said.

The 8 Hands Kitchen is born

With no kitchen on-site, at first Shapiro was limited in what he could produce for the farm butcher case, mostly  sausages. That changed in October, when the farm opened a state-of-the-art kitchen that had been two years in the making.

Once a month, five pigs from the farm that have reached the 250-pound threshold, along with sheep, are loaded onto a truck, driven to Orient, ferried to Connecticut, and driven to the slaughter house in upstate New York. The chickens take a similar journey to Rhode Island.

When they return, the chickens sell immediately. The lamb is popular and hard to keep in stock. Shapiro butchers one of the pigs a week. The cuts desired by home cooks, including ribs, chops and loins, make up only 20 percent of the animal. “We are left with all the rest,” Shapiro says.

That’s when he comes up with ways to make sure no pig part goes to waste. On a recent weekday, along with pâtés, hams, bacon and pancetta, the butcher shop included Pojarski — ground pork, seasoned, breaded and attached to the bone. (Think of it as a meatball shaped like a cutlet.) Pojarski traces its roots to Russia and was adopted by French chefs in the 19th century.

Even with sausages, Shapiro looks for ways to stand out by pulling from his French training. His links include a green one with some combination of kale, chard, broccoli rabe and mustard greens, whose origins are attributed to folk lore from southern France.

(As the tale has it, a farm wife was trying to keep chard and sausage away from a cat and had placed the two on an armoire. The cat reached the armoire, knocked both over, combining the ingredients. Today, towns across the region have some variation of the saucisse verte. And now, so does Long Island.)

The 8 Hands kitchen recently expanded to include a stationary food truck that is open Friday through Sunday, giving Shapiro another place to showcase his talents. Cured bacon, breakfast sausage or scrapple can be added to a breakfast sandwich. Sausages can be found on the menu here, layered into rolls and topped with sauces made using produce from the farm. If Shapiro has his way, everything will find a place at 8 Hands.

In the hands of Julien Shapiro, a pig is not just pork. It’s an opportunity to turn every part into something tasty. After the chops, ribs and other popular parts are removed, what’s left of the animal is cured, stuffed, molded, rendered and fried into creations that change with the seasons. Here’s how a pig is transformed in a typical week.

Skin is fried into chicharrones, airy pork cracklings. Bones and feet are used to make stock, some of which is clarified with rejected chicken eggs from the farm to make consommé.

Liver is combined with bits of heart and tongue and wrapped in pancetta for a pork liver terrine. Part of the shoulder is use for capicola. The jowl becomes guanciale, Italian for “cheek,” essentially pancetta that comes from the pig’s head instead of the belly, which is used for bacon and pancetta.

Sometimes the entire head is deboned and the remaining meat, snout, jowl and ears are used to make loaves of European-style head cheese, a chunky mix of tender meat and creamy gelatin, or some regional variation such as scrapple, which is native to Pennsylvania Dutch country.

Leftover trimmings from the belly are slow-cooked in their own fat, shredded, capped with lard and bottled into spreadable rillettes.

Shanks are brined and simmered before the meat is picked, seasoned with herbs and packed into pear-shaped molds with a 4-inch bone in the center that sticks out like a stem. When the meat is set, the mini pressed hams are removed from the mold, painted in bacon fat or lard and coated in breadcrumbs. It is essentially shaved bits of deli ham.

The pork livers return for country pâté, which is more coarse than the pâté en croûte. The meat is mixed with spices and milk, studded with dried apricots and pistachios, and wrapped in caul fat, membrane from the pig that helps the pâté keep its shape as it bakes, but also melts, keeping the meat from drying out.