Ruben Guzman is aware of your feelings on tres leches cake, how disappointed you become when they overdo the leche and the cake arrives sopping wet in a milky puddle. But his version remains pristinely dry until the moment you fork into it, and that’s just one reason why Latin American expats from all over the Island travel to San Antonio, his bakery in Valley Stream.

A second reason: “As soon as we opened the bakery in 1995, we realized that people from Central and South America wanted to live close by us,” Guzman told me. “They moved closer and came here to meet each other.” And so, a few years later, he built a restaurant adjacent to the bakery, with a cozy, olive-green 50-seat dining room in which the aroma of churrascos, parrilladas, completos and empanadas from Guzman’s native Chile is rarely absent. 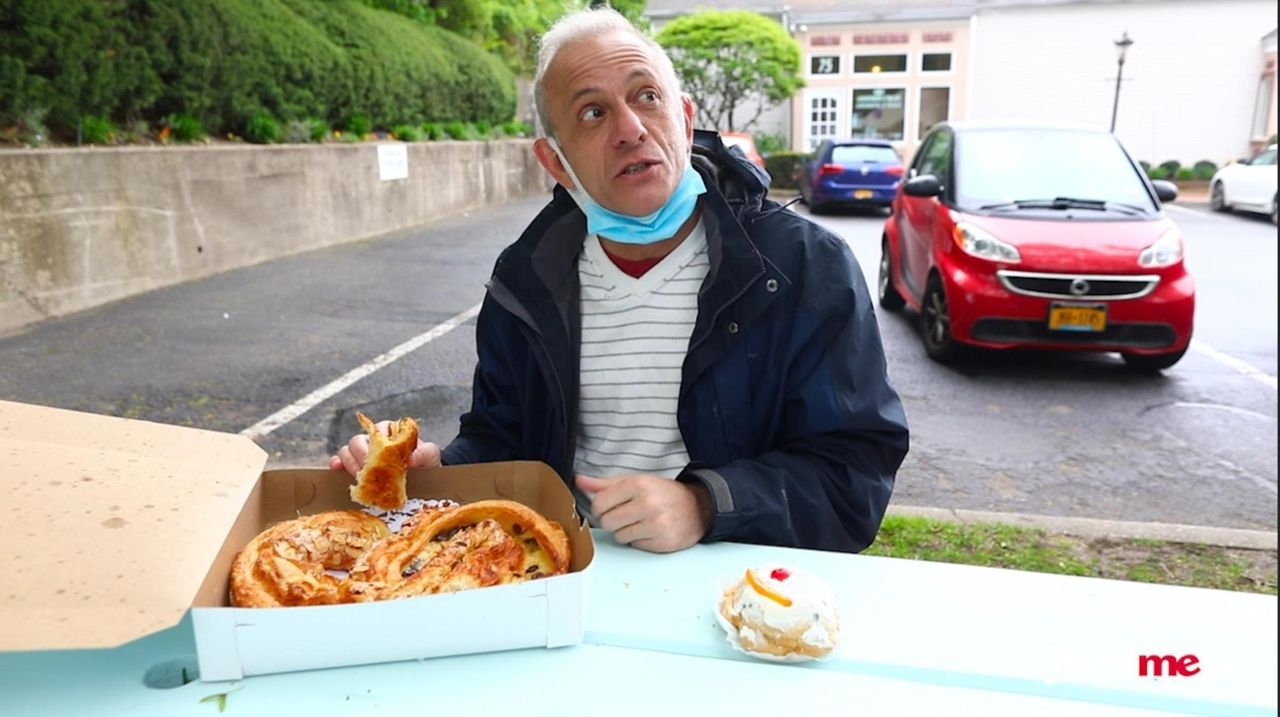 Food critic Scott Vogel visits some of his favorite LI bakeries Newsday food critic Scott Vogel sampled Chilean, Greek, and Danish treats when he checked out some of the locations on Feed Me magazine's bakery trail map. To see all the bakeries on the map, subscribers can visit newsday.com/feedme. Credit: Newsday / Chris Ware; photo credit: Noah Fecks

A third reason: San Antonio is located just 10 minutes from an airport with direct flights to and from Santiago. LATAM—the Chilean airline—“arrives at JFK in the morning, and people come directly from the airport to have breakfast.” Before return trips, they do dinner. “The flight to Chile is at night, so it’s very convenient for them.”

Cake, community and convenience—those are the secrets to Guzman’s success, and the same is true of other bakery-restaurants on the Island. From Valley Stream to Rocky Point to Westhampton Beach, hybrid establishments such as San Antonio are far more than the sum of their parts. They’re integral to their neighborhoods.

San Antonio’s Chilean hot dogs (completos)—loaded with sauerkraut, tomatoes and more—and churrasco steak sandwiches, always fabulously dressed with avocado and mayonnaise, owe their sell-out status to the house-made hot dog and hamburger buns that Guzman’s bakers churn out by the dozens each day. (“So many people don’t eat bread these days, but once I give them the bread we make, they get crazy.”) And no sooner have Guzman’s staffers baked the buns and rolls, than it’s time to turn their attention to his custom tres leches cakes, which come in every shape and size from modest to multilevel, all finished with delicately sweetened house-made whipped cream.

“We had taco trivia last night,” said baker Ann Olenick. We’re in Rocky Point, in the dining room of Broadway Market, which she manages with business partner Shasho Pole. They met years ago at a farmers market. “I went to pastry school, baking is my passion. And he owns a farm in upstate New York with grass-fed and -finished cows.” Together the pair worked the market circuit for five years before banding together and going bricks-and-mortar in Rocky Point, reconfiguring a former bar-restaurant into a cheerful, light-filled space with both dine-in and grab-and-go options, and turning the basement into a large kitchen complete with its own separate pastry room.

Broadway Market, which opened in 2017, affords Olenick the chance to sell her salted caramel toffee cookie pies filled with Swiss meringue buttercream, along with various cakes, tarts and more, and for Pole to offer grass-fed burgers and the like. But it’s when restaurant meets bakery that things turn magical, as with Broadway’s gourmet cream puffs, savory profiteroles filled with chicken salad or hummus. Still in the tinkering stages is the ultimate in indulgence, a burger served on a glazed doughnut bun, house-made of course. (“We haven’t gotten the right combination yet, but we’re working on it.”)

Broadway Market’s transition from bakery-restaurant to Rocky Point meeting place is no small part of its easy-going appeal. For every town resident, there is a theme night, it seems. “That’s what the community likes,” said Olenick. “We did Galentine’s Day, when all the ladies came with their girlfriends for lunch. PJ’s-and-pancakes is also popular, where the whole family comes in their pajamas and has brunch.”

When it comes to knitting together a community, few bakery restaurateurs have faced more challenges or succeeded more admirably than Rashid Sulehri, owner of Westhampton Beach’s 30-year-old Beach Bakery & Grand Cafe. When the devout Muslim purchased the area’s only kosher restaurant last year, there was an understandable amount of hand-wringing on the East End.

“Basically, the general fear at the time was that it’s not all that easy for a non-Jewish person to enter, engage and carry on a Jewish eatery,” he told me. “So my first job was to earn the respect of the community and the customers.” Sulehri was invited to speak to a nervous Hampton Synagogue congregation, where he spoke of his early years working at the kosher supermarket Monsey Glatt in Rockland County. “There, I learned everything about Jewish culture and holidays, what is kosher and what is not, how to prepare food and keep it separate.”

These days, Sulehri’s bakery sends breakfast every morning to the synagogue, along with food to Muslim events all over the area. At one, held after Ramadan last year, he helped more than a thousand break the fast during Eid al-Fitr.

Why are establishments like Beach Bakery such community builders? The short answer is that everyone, regardless of race, religion or creed, loves fried raspberry croissants. On a good summer day, Sulehri sells 1,500 of this, his most popular item, a crackly-crunchy sweet loaded with jam, although patrons also line up for tables in his café, which specializes in salmon, tuna and veggie burgers, fish and chips, eggplant parmesan and other meatless dishes. “No meat and no alcohol makes it kosher and halal at the same time,” added Sulehri. As a result, the crowds are larger than ever, Sulehri having built a community even bigger than the one he bought into. “When people come in, we don’t ask, ‘What’s your religion?’ ” he joked. No, at establishments like his, the only entrance requirement is a passion for great raspberry croissants, great tres leches cakes, great cookie pies—and the faithful are many indeed.

“It is so busy that sometimes—I own the place and I can’t even enter through the front door!” laughed Sulehri.

Feed Me Magazine: Explore the new issueExplore some of Long Island's best bakeries, go behind the scenes at local fruit farms and more.

3 new Long Island ice cream shops you need to try
30 great places to get ice cream on LI
LI landlords call for more COVID-19 grants for eateries
Detroit tourism seeks rebound after year lost to pandemic
Joy for UK pubs and hugs tempered by rise in virus variant
A Facebook food group comes together to make a cookbook
Didn’t find what you were looking for?