The preparations began just after Thanksgiving. Charlie Buthmann started planning the desserts he’d be baking for his Christmas Eve party, leafing through hundreds of clipped recipes, doing as much advance baking as he could, storing cake layers and doughs in his own two freezers, as well as those of his neighbors’ all over East Meadow.

He and his wife, Donna, also spent hours poring over photo albums from previous parties looking for culinary inspiration. This year marks the Buthmann’s 50th Christmas Eve bash and, Charlie says, “we’re pulling out all the stops, going with all the greatest hits.”

From its origins as a spur-of-the-moment college lark, the party has evolved into an epic celebration with its own traditions and in-jokes, a warmhearted yuletide gathering that welcomes anywhere from 30 to 50 guests whose only common faith is the enjoyment of elaborate and highly caloric desserts. 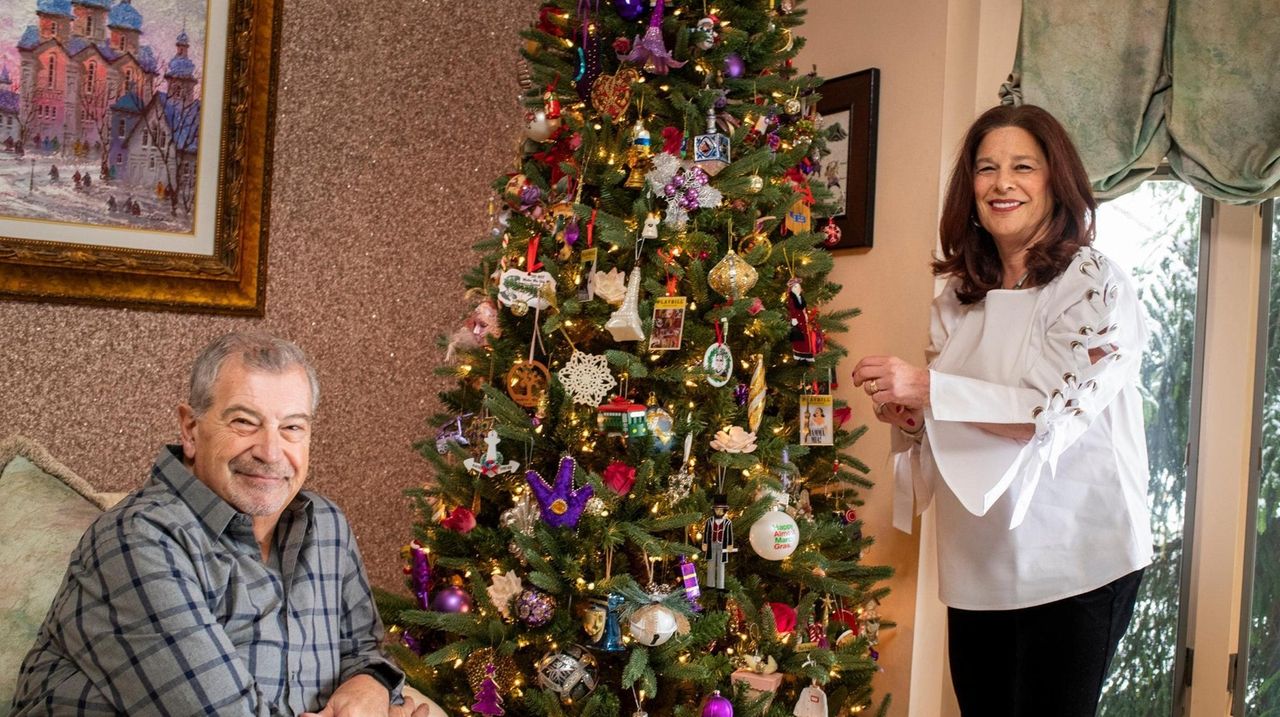 LIers reflect on annual Christmas Eve party after 50 years Charlie and Donna Buthmann of East Meadow are preparing to host their 50th Christmas Eve party, an all-inclusive tradition that started back college when he invited his four Jewish roommates home for the holiday. Credit: Corey Sipkin

The artistry of the photos shot over the past half century clearly belong to the pre-Instagram era, and time has also taken its toll on the colors. But there was no denying the brilliance of the stained-glass cake from 1984, its jewel-toned windows “painted” on a ground of white fondant, or 1998’s white-chocolate peppermint cake, ringed by a red-and-white stockade of candy canes. Looking a little ashen was the enchanted forest cake (1988), composed of upright meringue “trees.” The white meringue held up a bit better in the photo of the 2006 igloo cake, surrounded by marzipan penguins.

There were the guests: Robbie and Lisa Lewis, who have attended every single party. Alan Asher, almost as faithful, who always poses with a dish of nuts in his lap. Charlie’s mom, Winnie, at whose house the first 16 parties were held and who attended her last in 2005. (She was too frail to attend in 2006 so the party sang to her over the phone; she died just before the 2007 party.) The Buthmann’s two daughters, Amanda and Erica, made their first appearances in 1983 and 1986, respectively.

The hardest photos for the Buthmanns to look at were the ones of themselves, a hirsute 1972-edition Charlie in a crazy-patterned polyester shirt, Donna in all her shoulder-padded 1987 glory. “It’s impossible to get the pictures right,” she says. “Either I’m thin with gray hair, or I’m chubby with good hair. Or I’m thin with good hair and he looks fat.”

No pictures were taken that first Christmas of 1969. "Nobody knew it was going to be an annual thing for the next 50 years," says Charlie. The SUNY Buffalo sophomore had been preparing to head home to North Bellmore for the holidays when his four Jewish roommates started asking him questions about “what the gentiles do.” He called his mom to ask if he might invite them over for Christmas Eve, she gladly acceded and a tradition was born.

The feast was far from lavish. “My mom made a lasagna. There was Bonbel cheese with Ritz crackers and,” he recalls proudly, “I made a cheese fondue.”

The next year, the party got bigger. When Charlie attended dental school at Case Western Reserve, the guest list expanded further. In 1975, a Case Western undergrad named Donna Cohen came with her then-boyfriend. By 1981, she was Charlie’s wife and official sous chef. Over the years, she developed into a crack cookie chef and her porcelain sleigh filled with more than a dozen types of cookies has become the traditional centerpiece.

1985 was the one year there was no party. “I was pregnant, and had a new baby,” Donna recalls. “There was just no way.” But in 1986 the Buthmanns came roaring back, hosting for the first time in their new East Meadow home. From then on, anywhere from 30 to 50 people would show up, a mix of family, college and grad-school friends, neighbors and co-workers.

Charlie was now not only an employed dentist, but an increasingly ambitious and accomplished home baker who required a week to prepare for the event. “My boss would say, OK, take the week off — but you have to invite me to the party.”

In addition to showstopping desserts, the savory portion of the meal had also advanced beyond Bonbel cheese. Charlie always makes pulled pork with salsa verde as well as pigs in blankets and cocktail meatballs. There might be clams casino or smoked salmon. “And there was the time we had a raw bar — I don’t remember the exact year but I must have done a lot of root canals.”

One longtime party staple is latkes. “It began one year when Christmas Eve and Hanukkah fell on the same night,” Donna says, noting that potato pancakes are actually more fitting than pulled pork given that the majority of attendees are Jewish (including Donna). Decorations have always tended toward the ecumenical, with two small tabletop trees and more tinsel than angels but this year, for the first time, Charlie said “the boss [Donna] said we can have a real tree.” The seven-footer is decorated with souvenir ornaments from the couples’ travels, assorted dreidels and menorahs and one ornament painted with the likeness of Justice Ruth Bader Ginsburg.

There are also the ornaments rescued from Charlie’s dental office. He retired two years ago; Donna retired last year from her position as director of social work at Sagamore Children's Psychiatric Center. Enjoying their free time, they have also begun to permit guests to contribute: Someone will pick up a buche de Noel from Saint Honore Pastry Shop in Port Washington and the hunt is on for a croquembouche that meets Charlie’s exacting standards.

But the Buthmanns have their hands full with this year’s menu: that white-chocolate peppermint cake, the enchanted forest cake, bread pudding made with jelly doughnuts, the obscurely named chocolate-on-chocolate “Muriel’s monster cake” decorated with Keith Haring-esque squiggles, a “train cake” whose chocolate-peanut butter cars idle on licorice tracks, and a superrich bittersweet chocolate terrine decorated with chocolate curls, gold dust and dragées. A guest is bringing a flourless chocolate cake but apparently that wasn't enough chocolate for Charlie who is introducing one new dessert this year: a Martha Stewart recipe for "mile high" triple-chocolate espresso mousse pie that features a cookie crust and ombre layers.

And just like that, a new Christmas tradition is born.