Carmelina Nixon, Patricia Nixon and Maura Maietta Nixon try mussels; Maura follows all of her Nonna's recipes for the Feast of the Seven Fishes every Christmas Eve. Credit: Yvonne Albinowski

On Christmas Eve morning, a few things were usually certain in and around Westbury, where I grew up: For one, there was a line at the bakery (in this case, Cardinali Bakery in Carle Place) for Italian bread and semolina rolls. A few miles away at the fish market, there was also a line, one that had snaked out the door since early morning as people picked up mammoth orders of clams, shrimp, flounder, octopus and scungilli. And at home, I’d be seesawing between anticipation and dread. While there was linguini in my future, there was also, lurking somewhere in the fridge, my Christmas Eve archnemesis: Baccala, salted and dried cod filets which released their salt into a pot of water over several days — but never enough salt for my fussy adolescent taste.

For generations of Long Islanders of Italian descent, Christmas Eve means being propelled to the edge of food coma during the Feast of the Seven Fishes, a marathon meal whose preparation could dominate the kitchen for days. Though the swelling to seven courses began in the late 1800s in Italian-American pockets around New York and the United States. the meal can trace its roots to southern Italy, where eating fish the night before Christmas is called Il Cenone di Vigilia, or la Vigilia (“The Vigil,”) for short.

Despite its apparent gluttony, however, the Feast of the Seven Fishes has an underlying humility. The seven (and sometimes many more) courses are traditionally centered around less expensive shellfish and seafood, such as clams, mussels, anchovies, sardines and salt-preserved cod. Just lots of it.

“We come in at 6 a.m. on December 23 and stay overnight, packing up orders,” said Walter Mersincavage of Land & Sea Fish & Lobster Corp. in Mt. Sinai. The market fields over 1,000 orders for Christmas Eve, with lobster tails in high demand, he said, plus “a lot of shrimp, clams, scungilli, octopus, mussels, flounder …”

“Yes, definitely baccala,” he said, which Land & Sea offers both dried as well as presoaked.

Maura Maietta Nixon of Seaford, who celebrates the feast with her family at home in Seaford, learned to cook the Seven Fishes by observing her grandmother in the kitchen. “There was no recipes — nothing was written down. The only way to learn was to watch,” said Maietta Nixon, whose ‘nonna.’ Carmela Maietta, arrived in the U.S. in 1955 to join her husband, Ciro. Both were from a part of Naples called Pomigliano d’Arco, at the base of Mount Vesuvius, and her grandmother used to tell Maietta Nixon that when you leave your family behind in another country, “You may not ever see them again, so tradition is everything.” Her four-foot-ten nonna would say “I learna you,” as she cooked lobster tails in marinara sauce, baked clams oreganata, fried calamari and shrimp, and mussels steamed in wine with lemon juice and parsley, called mussels impepata di cozze.

“When they came over [from Naples], they were poor, and would cook sardines," and other simple seafood, Maietta Nixon said, such as a dish that only appears once a year — eel seasoned with salt and pepper, then fried in olive oil.

Maietta Nixon buys the eel, and the rest of her Christmas Eve seafood, at John’s Farms in Bethpage, which opens at 6 on Christmas Eve morning, and where lines extend through the store and out into the perpetually packed parking lot. Along the way, Maietta Nixon has dropped a few things from the lineup — including baccala — and added modern twists like crab-stuffed baked mushrooms. She always starts the meal the way her grandparents did, too, with spaghetti and lobster-tail sauce. “My one big piece of advice is to close the bedroom doors,” Maietta Nixon joked, so that the fish smells don't get into every nook and cranny of the house.

Back at our home, my stepmother Susan Hirsch (nee Dalia) cooked in a frenzy from Christmas Eve morning until we took our seats at the table in the early evening: There’d be shrimp scampi, and fried smelts and flounder, and lobster tails in red sauce. Though each dish was delicious, she would inevitably point out minor faults in each, and would practically have a coronary if my stepbrother or I would try to bring Parmesan cheese anywhere near seafood.

But no matter how many days my stepmom had soaked the baccala (three, it turns out), I couldn’t abide its salty funk. So, many years later, when it's the first course during a Seven Fishes preview lunch inside The Carltun in Eisenhower Park — layered with potatoes, roasted red peppers and ribbons of fennel, then dressed with excellent olive oil and red-wine vinegar — it’s so delicate and mild I do a double take. “Wow,” I say quietly while sitting next to Anthony A. Capetola, The Carltun’s owner.

This a recipe from Capetola’s mother, Rose, as interpreted by Carltun executive chef Stephen Rosenbluth. “My mother would serve [the bacala] two ways,” said Capetola — both with potatoes and peppers, as we eat it that day, as well as in red sauce. 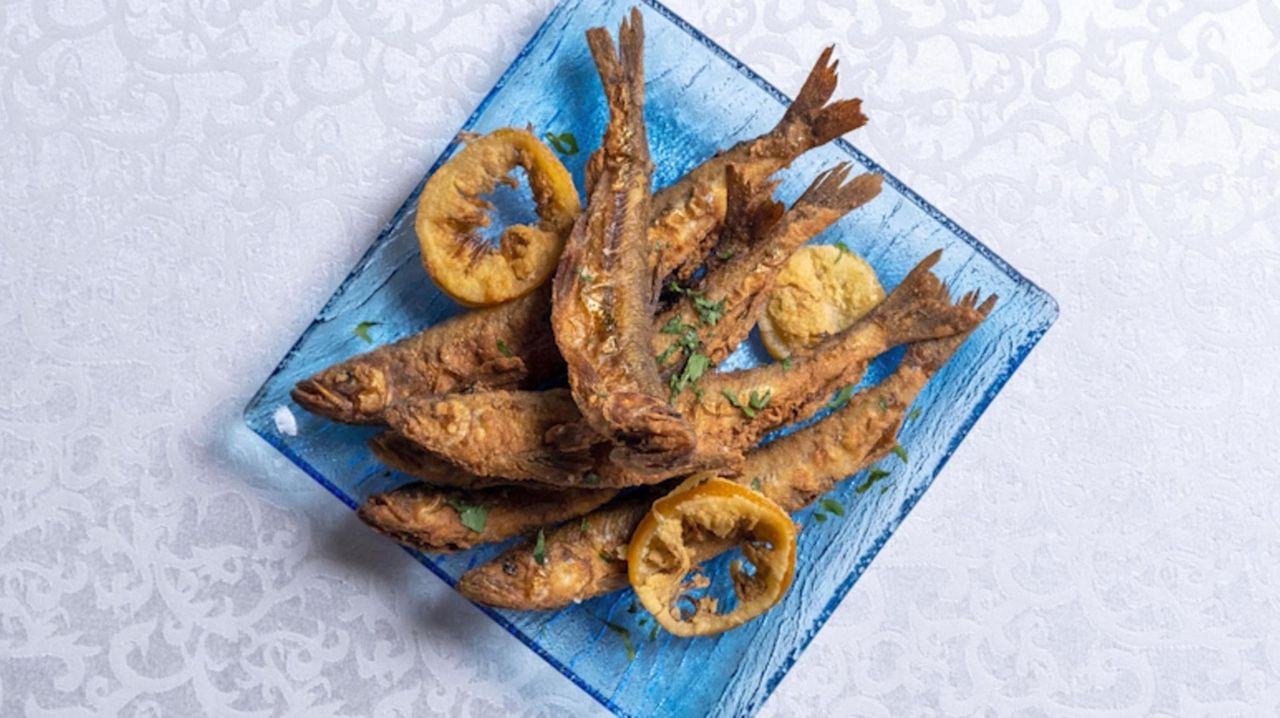 Inside The Carltun's Feast of the Seven Fishes Anthony A. Capetola, the owner of The Carltun at Eisenhower Park in East Meadow, talks about the Feast of the Seven Fishes and how his family tradition morphed into a public event at his restaurant. Carltun executive chef Stephen Rosenbluth on Dec. 12 prepared a test run of this year's Christmas Eve dinner. Credit: Daniel Brennan

Capetola grew up in Jersey City as the youngest of nine children, and his mother would send him to the fish market to pick up what they needed. Her feast consisted of two pastas, including a linguine in a simple but tangy preparation of anchovies, garlic, chili flakes and pasta water, which is briny, subtly smoldering and irresistible. “If you think about the dishes [of Christmas Eve], they were built around what was cheap,” he said, echoing Maietta Nixon — the humble roots of many southern Italian immigrants reappearing on the American table, in abundance.

After recreating the tradition in his own family for decades Capetola, now in his 70s, brings dozens of family members — including his wife, children and grandchildren — to the Carltun’s Palm Court each Christmas Eve for the feast, which is also open to the public.

It will be the first year Rosenbluth will cook Seven Fishes here, and many courses will meld Capetola family recipes with the chef's own seafood acumen (Rosenbluth also owns two fish-centric restaurants on the South Shore, Cardoon in Seafood and Anchor Down in Merrick). We preview some of the dishes that afternoon: Fried smelts, earthy and on the outside and flaky inside, and so addictive I pick the remnants apart with my fingers. There’s calamari stuffed in a Sicilian style, with ricotta cheese, raisins and pine nuts, plated in a cross between a tomato sauce and wine broth. There’s a curl of charred octopus over gigante beans and cerignola olives, and a gauzy lemon sole filet entwined with a giant shrimp, perched on a polenta cake with broccoli rabe in a lemon-butter sauce (killing two fishes with one stone).

When I leave the Carltun, stuffed to the gills, I am sent on my way with sticky stuffoli, or honeyed dough balls, as well as pignoli cookies; no self-respecting Seven Fishes feast could end without dessert. The food coma feeling is familiar, and baccala is no longer a foe. ؅“You just need to soak [the fish] for three or four days,” said Rosenbluth. He adds a few more tips: Let anchovies dissolve into the heated olive oil for the linguine con alige, and make sure to spear stuffed calamari “in one end and out the other, with a bamboo-like skewer,” to keep it from spilling its contents as it cooks.

Now that my stepmother has passed, my stepbrother and his wife, Alex and Deborah Panagacos, take the reins on Seven Fishes every year, keeping it alive. This year, I’ll bring clams oreganata. And maybe salted cod will be on the table again.

“As long as I can remember, we have always had seafood on Christmas Eve, consisting of shrimp, lobster, calamari, octopus — sometimes mixing it up to add different items …. My husband and I owned a fish store in Brooklyn for 26 years, so seafood has always been a big part of our menus, but never more than on Christmas Eve.” — Donna Larmann, Massapequa

"I cook with my sister every year in Brooklyn to keep our parents' tradition going. We have raw clams and oysters on the halfshell, and when it's available, we'll actually get sea urchin. I make my recipe for linguini with clams, and we have baked clams, and lobster, and beer-battered shrimp. We also have octopus and mussels. Part of our family is vegetarian too, so we cook eggplant parm and baked ziti." —Michael Sgroi, Wantagh; Sgroi shares recipes and food photos on his Facebook page, Cooking with the KingFish

“Not all Italians celebrate Christmas Eve with a feast. Christmas Eve was a day of abstinence before Vatican II. So, gorging on seafood wasn’t the custom. In my family, dinner for Christmas Eve was very simple. Traditionally served are: bacala, pasta, cheese, bread, vegetables. Crispelle are served for dessert.” — Lidia Zappa, North Bellmore