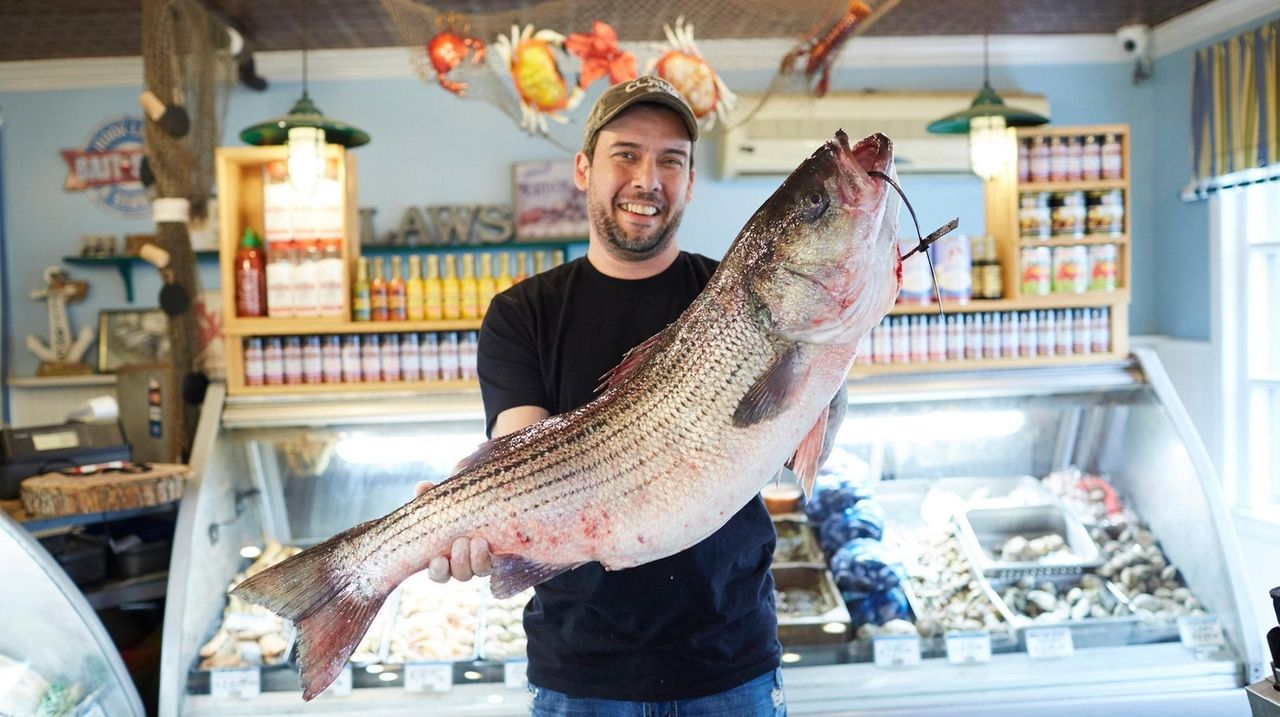 The fish counter can strike terror in the hearts of otherwise confident food shoppers. Whether it's fear of bones, an aversion to seeing whole animals or confusion about what exactly to buy and how to cook it, even avowed fish lovers often shy away from cooking seafood at home. And so Newsday food reporter Erica Marcus spent the afternoon on Wednesday, May 1, with Frank Palermo, owner of Claws Seafood Markets in West Sayville and a former head fish buyer for Pathmark supermarkets, for a crash course in choosing fish. Credit: Yvonne Albinowski

The fish counter can strike terror in the hearts of otherwise confident food shoppers. Whether it’s fear of bones, an aversion to seeing whole animals or confusion about what exactly to buy and how to cook it, even avowed fish lovers often shy away from cooking seafood at home.

Many of these problems can be solved in one fell swoop by patronizing one of Long Island’s great independent fish markets. Think about it this way: Nobody goes into seafood retailing for glory or riches. Sharing a passion for fish with their clients is the reward most of these folks seek. Make the fishmonger your friend, and you’re most of the way to a successful fish supper.

Nevertheless,  as the saying goes, an educated consumer is the best customer. And so we spent an afternoon with Frank Palermo, owner of Claws Seafood Markets in West Sayville and a former head fish buyer for Pathmark supermarkets, for a crash course in buying fish.

Do fish have a season?

“People don’t often think about seasonality with fish,” Palermo said. “But many fish have seasons — in our waters and in other parts of the world.” Spring, he said, is when soft-shell crabs start showing up in the Northeast. This year Claws got its first shipment in early May but, starting later in the month and going through the summer, the supply will increase and the price will come down.

Spring, though, “is not the best time of the year for local fish.” Palermo looks forward to the fall for local “striped bass, tuna, porgy, swordfish, blue, weak, squid, crabs, trigger, the list goes on and on.” The season for Long Island’s most famous catch, the Peconic Bay scallop, starts in November and, though it runs through March, is usually exhausted by December.

How can I tell if the fish is fresh?

“When you look at a fish,” Palermo said, “the eyes should be clear, the scales should be intact, the gills should be red.” A fresh whole fish will also be covered in shiny, gleaming “slime” and, when you poke it with your finger, the flesh should bounce back. It should have nothing but the faintest ocean scent.

How exactly would a customer assess the resilience or the smell of the fish that’s in a glass case? “I want the customer to smell and touch the fish” he said. “I’ll give her a pair of gloves and let her at it.”

What about assessing fillets and steaks?

“When the fish has been cut into pieces, the flesh should be moist, never dry, no browning or off-coloring around the edges. If the meat is separating from itself, that’s a sign of age,” he said.

What’s the difference between fillets and steaks, anyway?

“The fillet is a long, mostly boneless cut alongside the backbone. For steaks, the fish is crosscut through the backbone.”

Should I avoid farmed fish?

“People don’t insist on wild cows, chickens or pigs,” he said. “Fish is the only protein out there where you even have a choice.”

For most species, he continued, it’s either or: “There is no farmed mackerel, no farmed flounder. And there’s no wild tilapia, very little wild branzino.”

“What I want people to ask me,” he continued, “is ‘tell me about the farm that the fish comes from.’”

What makes one farm better than another?

Palermo looks for farms that raise fish without antibiotics, in large enough pens that they have room to swim about. “It’s the same with chicken,” he said. “You have some chickens raised in tiny, confined areas, and you have chickens raised with room to run around. Same with free-range beef or pastured pork.”

It’s a complicated issue because there are so many variables involved. Most farmed salmon is from the Atlantic Ocean, from Maine and Canada across to Norway and Scotland. Salmon is also intensively farmed along the Pacific coast of Chile. All belong to the same species and the differences among them are due to farming practices — what they are fed, how much room they have to swim, at what size are they processed.

“When you go to a supermarket and see salmon at $5.99 a pound,” Palermo said, “it’s typically a Chilean salmon, raised in small pens and pulled out while it’s small.” At Claws, the farmed salmon usually comes from Scotland or Norway and sells for between $13 and $18 a pound. While the USDA does not certify any fish as organic, Palermo looks for salmon that has been so designated by the European Union.

Wild salmon species, all from the West Coast, include chinook or king, coho or silver, sockeye or red, and steelhead.  They are caught as they return from the sea to rivers on the West Coast, from California all the way north to Alaska, and their seasons are strictly regulated by the federal and state governments to ensure a healthy stock. Typically, the king begins running in April, sockeye (including the famous Copper River sockeye from Alaska) in May and coho in July. Prices per pound can start in the high $20s and go north of $40s. Out of season — from late summer to early spring — any wild salmon in the market is frozen, though not always labeled as such.

Most farmed salmon has a milder flavor but fattier flesh than wild. “It’s a lot easier to overcook a wild sockeye,” he said. “A farmed salmon out of Scotland you can cook until the cows come home, and it won’t dry out.” But the taste of wild salmon is incomparable. “It’s so rich, like a fine wine,” Palermo said.

How do I substitute one fish for another in a recipe?

Palermo groups most fish into two categories. ‘You have your fish with white, flaky meat — cod, flounder, fluke, sea bass, snapper, haddock, hake — all those fish can be substituted for one another in recipes. Then you have your grilling fish, denser, firmer, great on the grill — swordfish, tuna, mahi mahi, shark, marlin, opa,” which can also be used interchangeably. He relegated to a third category those fish whose strong flavor might not work in every recipe: salmon, mackerel, bluefish.

How can I avoid bones?

Palermo sympathizes with fish lovers who nevertheless fear bones; as a kid he wound up in the  emergency room with a blackfish bone in his throat. “Just because it’s a fillet doesn’t mean it doesn’t have bones,” he cautioned. “Even after you fillet a fish there are still little bones — we call them pin bones. In a small fish, they will cook out but with one of your big, ‘doormat’ flukes, they will still be there.” Pin bones can be removed either with a pliers or by cutting a ‘v’ along the length of the fillet. “Just ask your fishmonger to make sure that your piece of fish is 100 percent boneless,” he advised.

Should I ever buy frozen fish?

You probably already do. Palermo said that almost all Chilean sea bass in the market comes frozen and is defrosted at the fish counter. Ditto orange roughy and, again, any wild salmon sold out of season. “The truth is that a lot of these fatty, meaty fish freeze really well.”

There’s no fish store on Long Island that doesn’t have a variety of thawed, frozen shrimp for sale. Shrimp seasons in the Gulf of Mexico and South Atlantic waters vary by species and fishery strength but, he said, “when Texas or North Carolina is pulling in shrimp, we will always have them fresh.”

Can I freeze or refreeze fish at home?

Palermo said that the texture and taste might suffer but, from a food-safety standpoint, you can indeed freeze fish. "If you do," he said, "wrap it tightly in plastic wrap, then immerse it in a Tupperware container filled with water. That will keep it airtight."

If you’re looking for selection, quality and counsel, you’re usually better off buying fish at the fish market than at the supermarket. Usually, but not always: John’s Farms in Plainview, the fish counters at the seven Long Island locations of North Shore Farms (operated by John’s Farms) and the Asian supermarkets Hmart, H&Y and V&C are among LI’s very best seafood retailers. Here are some of the best:

LI's best seafood restaurants of 2019On Long Island, it's easy to become a pescatarian.