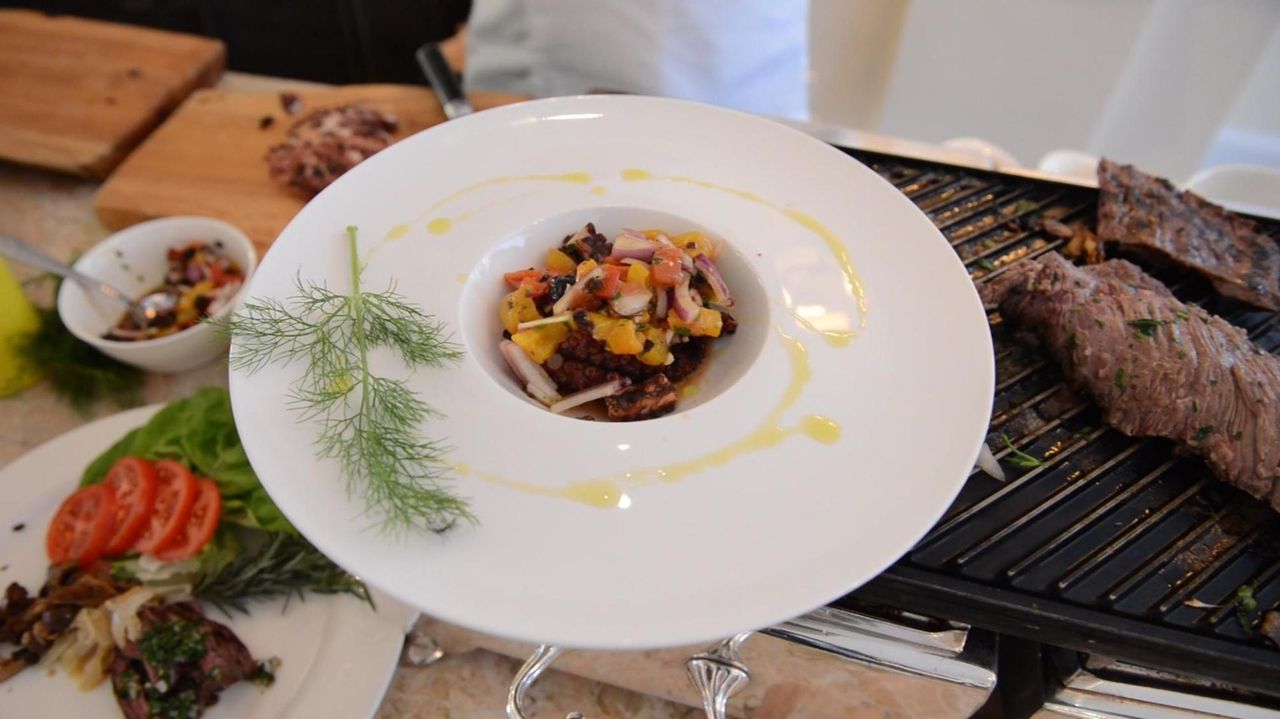 On Tuesday, Jan. 9, 2018, executive chef Rodrigo Bernal of The Carltun at Eishenhower Park talked about the food and wine festival the restaurant will be hosting on Jan. 19, 2018. Guests will have the chance to sample more than 200 wines, and foods from around the world. Credit: Daniel Brennan

January is a month of contradictions. Though many of us try to repent for holiday indulgences by swearing off rich food — and sometimes alcohol — wintry, housebound days might also kick up cravings for those very things.

For those cravings, January’s third weekend will be punctuated by two back-to-back events that may reintroduce festivity into what can be a cheerless month, in the form of flowing wine and gourmet food.

On Friday, Jan. 19, The Carltun, the restaurant nestled in East Meadow’s Eisenhower Park, will come alive with more than 200 wines and accompanying dishes from around the world during the inaugural Carltun Food & Wine Festival.

Executive chef Rodrigo Bernal and sommelier Fadi Yako have long collaborated on The Carltun’s weeknight wine dinners, and they’ve taken that cooperation into overdrive for an event with more than a dozen food stations devoted to countries and regions such as Italy, Spain and Long Island, and even Oregon, along with a bounty of wines for pairing with each type of cuisine.

Bernal, who has led The Carltun’s kitchen for two decades, has conceived a sprawling menu that takes in yellowfin tuna poke with macadamia nuts (California), grilled skirt steak with chimichurri (Argentina) and grilled octopus and suckling pig (Spain) to match with 200-plus wines curated by Yako and his partner distributors. The stations, as well as high-tops and tables, will be scattered throughout The Carltun’s ornate rooms, and a $99 ticket earns guests as much sampling as they’d like until the event winds down at 10 p.m. (Tickets for nondrinking designated drivers are $55.)

With more than 1,400 wineries represented in The Carltun’s cellar, expect a few surprises and offbeat bottles, such as Priorat and sherries from Spain, Gevrey-Chambertin from France and gewürztraminer from the North Fork. “You will be able to build your own pairings,” Bernal said.

The next day and barely three miles away, a culinary event with a more casual day-drinking vibe kicks off at 1 p.m. inside the exhibition hall at NYCB Live’s Nassau Coliseum. More than 130 food and drink vendors, including dozens of wineries, breweries and distilleries, will pop corks and unscrew caps for the Fine Wine & Food Festival, a first for the venue.

Nick Vaerewyck, the Coliseum’s senior director of programming, suggested the event will mimic the food-and-wine festivals people come to expect during the summer, but are thin on the ground in winter. “It’s the chance to escape the cold outside and enjoy some warmth inside,” Vaerewyck said.

A $49 advance ticket ($65 on the day of) earns attendees a glass and unlimited sampling of wine, beer and even kombucha (from Long Island’s Coastal Craft Kombucha), as well as samples from producers of such vittles as artisanal pickles, jerky and mochi ice cream. Larger dishes, like crispy stuffed wontons from All American Wonton and grilled-cheese sandwiches from Meltology, will be available for purchase — although a $99 VIP ticket comes with two food vouchers, as well as a lesson with a sommelier, access to a VIP area and a one-hour-earlier entry to the event.

To keep things lively, radio station WBLI will be in the house, and organizer Coyote Events has invited clothing and jewelry vendors, as well as brought in games such as giant Jenga and cornhole. Just be sure to bring a photo ID — the festival is strictly 21 and over.

Sample 200 wines from around the world, scattered throughout The Carltun’s opulent rooms and accompanied by dishes from The Carltun’s executive chef, Rodrigo Bernal.

This event brings together more than 130 food-and-drink vendors — including many from Long Island — for an event that mimics summertime festivals.

The best things we ate this month on LIDon't go searching for something good to eat. Newsday critics have done it for you.