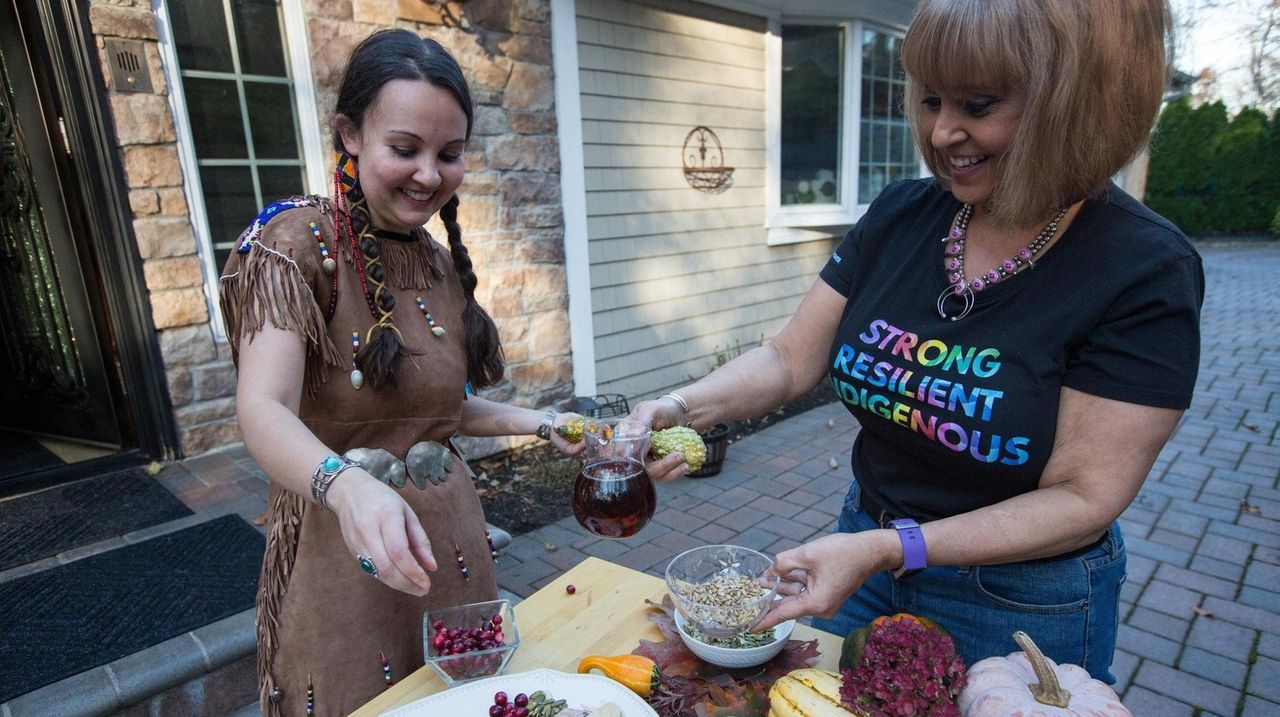 Erica Belk, the co-owner of the Frozen Sin food truck, is one-quarter Native American. For her, Thanksgiving has always been a time to reflect on her legacy. This year, she is sharing her heritage with her customers. She and her wife and business partner, Stephanie Belk, have introduced two ice cream sandwiches inspired by Native American ingredients.  Credit: Linda Rosier; Photo credits: iStock, Alejandra Villa Loarca, Erica Marcus, Marisol Diaz-Gordon, Yvonne Albinowski

Erica Belk has a singular culinary perspective on Thanksgiving, and not because her stock in trade is ice cream. The co-owner of the Frozen Sin food truck is one quarter Native American and Thanksgiving is a time to reflect on her legacy.

According to the historical record, when the Wampanoag Indians extended the hand of friendship to the Pilgrims on that first Thanksgiving in 1621, the meal featured fowl, venison, shellfish, fruit, pumpkin and squash. What many Americans don’t realize is that pumpkin and squash would have been unfamiliar to the Pilgrims as they were native to North America, thus unknown in Europe.

In fact, most of the foods that form our Thanksgiving tradition originate in the "New World": corn, potatoes and sweet potatoes, cranberries, maple syrup — not to mention chocolate, tomatoes, peppers, eggplant, avocados, blueberries, sunflowers, peanuts and most beans. We don’t know if the Pilgrims ate turkey on that first Thanksgiving but, if they had, it would have been a new bird on them. Turkey is also native to North America.

When Belk was growing up in Woodbury, Thanksgiving was a time to honor the indigenous origins of the feast. Her grandmother, Harriet Wood, a full-blooded Lenni-Lenape (of the Delaware nation), always made a saute of corn and red and green peppers and, more importantly, instilled in her family a cooking creed that is as relevant today as it ever was. "She always said, ‘corn, squash, beans — whatever we have, it’s what the creator gave us," she recalled. "And we must make the best use out of it."

This year, Belk is sharing her heritage with her customers. To Frozen Sin’s regular lineup of confections (which are delivered all over Long Island), she and her wife and partner, Stephanie Belk, have introduced two ice cream sandwiches inspired by Native American ingredients. Both are made with cornmeal wafers; one is filled with chocolate ice cream sweetened with maple syrup and swirled with cranberry-orange preserves; the other is filled with a layer of sweet corn ice cream and a layer of maple-butternut squash ice cream that’s been punctuated with toasted pumpkin seeds.

Frozen Sin is also selling pints of a new ice cream flavor, Little Sunflower Vanilla Bean Swirl, that is dear to Belk’s heart: vanilla ice cream with ribbons of sunflower butter and toasted sunflower seeds. "Little Sunflower" is her Native American name, bestowed upon her by her grandmother and other tribal elders when she was a year old and her sunny personality began to shine.

On an unseasonably warm November day, Belk showed off both her ice cream sandwiches and a hundred year’s worth of tribal regalia and keepsakes. We met at her parents’ house because "my mom won’t let this stuff out of her possession." She wore the fringed leather dress that her mother, grandmother and great grandmother had worn for ceremonial dances, her waist encircled by a belt of silver bears, her clan’s spirit animal. On the inside of her upper arm is a tattoo of her grandmother’s prayer feather.

Before their forced removal further west, the Lenni-Lenape occupied much of southern New York (including what is now Nassau County), New Jersey, eastern Delaware and eastern Pennsylvania. The Shinnecocks, whose territory included eastern Long Island as well as most of southern New England, is a distinct nation but since the Wood family lived in Queens and Brooklyn, they said they were also involved with the Shinnecock nation, helping to found the first modern Shinnecock powwow in1946.

Belk’s mother, Lisa Wood Belk, was a regular at the powwows in the 1970s. She was a dance champion, spending her summers traveling to events all over the North East and using her winnings to help support the family. Her daughter, Erica, treasures the garments, the jewelry, the artifacts and the fading photographs that testify to her family’s century-long effort to retain their indigenous traditions.

Erica and Stephanie (who learned in high school that she was part Crow) were married in 2016 in a Native American ceremony. The rainbow motif that shows up often in their branding refers not only to their gay pride, but to the Indian name of Erica's beloved grandmother, Little Rainbow. Even though she died 10 years ago, her spirit lives on in the flag flown by the truck, in their go-to ice cream sprinkles and, particularly at Thanksgiving, in their hearts.

WHERE TO GET IT

Frozen Sin started out as a food truck that showed up at farmers markets, festivals and private events. Due to COVID-19, the truck is now available only for contactless deliveries. Ice cream sandwiches are $24 for four triangles, pints of ice cream are $12, pies are $8. More information is available at frozensintruck.com. The menu, which changes often, is posted on Instagram (@frozensintruck) and on Facebook (facebook.com/Frozensintruck). Call 516-353-8713 or email erica@frozensintruck.com.

LI restaurants open for Thanksgiving takeout, dine-in dinnersIf you're not cooking, these spots are serving socially distanced meals or offering takeout dinners to eat at home.