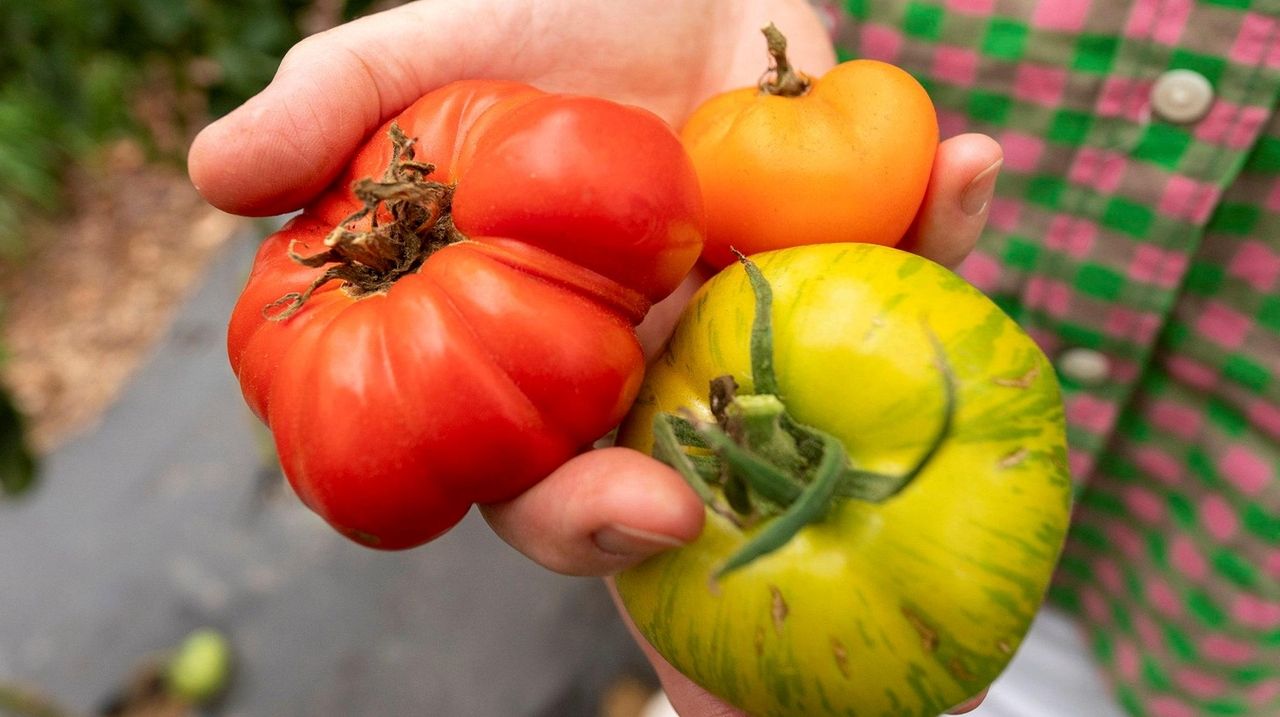 August means one thing: tomatoes. At other times of the year, you might find me buying tomatoes in the supermarket, but in late summer, that is culinary sacrilege. Long Island’s farmers markets are overflowing with tender, fragrant tomatoes of every description. They haven’t been trucked in from Mexico or California or Florida, but have been grown right here, in Suffolk and Nassau counties.

For the ultimate late-summer tomato experience, set aside a day to make a proper tomato crawl. Starting in Wading River and proceeding east to Southold, I visited six North Fork farms.

My focus was the tomato varieties that we call "heirloom." It's a term that has no legal meaning, so marketers are free to use it with abandon. Here, for the non-agronomists and non-geneticists, is a working definition:

In the olden days — from the dawn of agriculture until the middle of the 20th century, farmers developed varieties by saving seeds from the plants that were the hardiest or most delicious, thereby ensuring that those qualities would pass down through the generations.

Today, we refer to those plants as heirlooms because most modern crops are grown from seeds that were developed in a genetic laboratory, i.e. hybrid varieties. The goal of most plant genetics is not to produce the most delicious fruits or vegetables, but to produce ones that are easiest to grow, have the highest yield, are most resistant to pests, are consistent in size and shape, that mature at the same time (so that they can be harvested in one go-round) and that can stand up to a lengthy shipping process to arrive at your supermarket undamaged. This is all good for the farmer’s and the supermarket’s bottom lines. It is not good for the taste of the tomato.

Bear in mind that there is no tomato variety called "heirloom," just as there is no make of car called "luxury." If you are considering spending $100,000 for a car, you’ll want to know whether it is a Rolls-Royce or a Lamborghini, and if you are going to plunk down $4 to $8 for a pound of tomatoes, you deserve to know what exactly you are getting. Here are six local farms, all of whom specialize in heirloom varieties.

Rose Andrews is justly proud of her farm’s Yellow Brandywines, as are three generations of the Andrews family that works this half-century-year-old farm at the gateway to the North Fork. This sunny globe has a more complex flavor than some other yellow varieties. The Marneros are not, technically, an heirloom variety, but are a hardier knockoff of the sought-after Cherokee Purple.

John Zilnicki’s favorite tomato is the Old German, an irregularly shaped bruiser with stripes ranging from lemon to scarlet; the interior of the fruit is just as beautiful. Don’t even talk to him about cooking the tomato; his favorite way to eat it is right off the vine, right out of his hand. If the tomato makes it to the farm stand, he might slice it and sprinkle on some grains of Himalayan pink sea salt, which he keeps at the ready. Cherokee Purples are also a staple here and Zilnicki pointed out that these deep red get greener as they ripen so don’t be led astray.

The North Fork’s newest farm is the brainchild of farmer Ryan Letora whose approach blends age-old methods with labor-conserving technology. Tomatoes here are trained on twine that extends almost to the roofs of the greenhouses that keep them dry throughout their whole life span. Lertora grows Speckled Roman, a gorgeous, striated paste tomato (low moisture, good for sauce) and Marbonne, silky and deep red, befitting the dollar price tag for each seed. The perky Green Zebra will dispel all your preconceived notions of green tomatoes not being sweet.

Peter Treibers, Jr. and Sr., founded this Peconic farm in 2014 and tomatoes have emerged as a key crop. They grow four varieties of cherries, including the inevitable and candy-sweet Sungold (which is not an heirloom) and the larger, dusky red Black Cherry, which is. Jr. is sweet on the Garden Peach, a refined little charmer with a yellow hue ripening toward a hint of pink. True to its name, the skin even has a little fuzz. His favorite paste (cooking) variety is the Midnight Roma, torpedo shaped as ripening to a purple as dark as an eggplant.

Thomas Hart, who farms this acreage with his mother, Michelle confessed that he doesn’t really like to eat vegetables, but he’s trying to set a good example for his young son. He can’t help but be tempted by the luscious Pink Boars he grows, scarlet with stripes of a deep, almost metallic green, and the Striped Germans, giant, yellow-to-red siblings to Old Germans. Hart grows a big, fat cherry variety called Bumble Bee.

KK’s ramshackle barn is the Fort Knox of Long Island tomatoes and farmer Ira Haspel is their Cicero. He grows dozens of rare varieties including the Japanese Black Trifele, deeply flavored, which has a distinctive pear-like hump at the stem end. Mostly red, it slices to a deep mahogany. The Great White lives up to namesake whale in size, though it’s not nearly as ferocious, and would be great paired with Aunt Ruby Green, similarly huge, but full of sweet, tart, fruity flavor.

Try not to buy more tomatoes than you can deal with in the next two or three days because the best place to store them is on your kitchen counter — the refrigerator will blunt their flavor. Unless they are cherry tomatoes, don't stack them on top of or next to one another. Your goal in storing tomatoes is to maximize air flow around them and to minimize the amount of pressure against them. I store them in a shallow basket stem-end down, so the tomato's weight is evenly distributed around its crown. For more than a few days' storage, place them in the refrigerator, but bring them to room temperature before using them.