First things first. To understand the following craze — or properly surf the web — you need to accept cookies. And not just any cookies, but extreme cookies. You have to accept that old-school rounds are not enough, that snickerdoodles and pecan sandies — self-medicating wonders in times past — are not up to the present moment’s challenges. Cookies must be larger, perhaps a half-pound or more, they must explode with tens of flavors, and they must, above all, be stuffed with something. With brownie batter or Nutella, with cotton candy or Almond Joys. If the cookie’s reign as America’s bingeing go-to is to continue, so the thinking goes, they’ll have to up their game.

Long Islanders, no strangers to emotional triggers and the carb bombs that love them, are lapping the rest of the nation when it comes to producing extreme cookies, and maybe consuming them, too. Local ovens are working overtime to ensure that your waistline’s quarantine-15 demands are continuously met with 6-ounce Dunkaroos, chocolate chip cookies stuffed with rainbows, peach cobbler, Yoo-hoo candy bars.

Which brings us to an online bakery by the name of My Cookie Dealer, the success of which will leave you breathless. Consider: it was barely a year ago that the husband-wife team of Juan and Karen Morel began offering cookies for sale to their Instagram followers (which now number over 200,000). 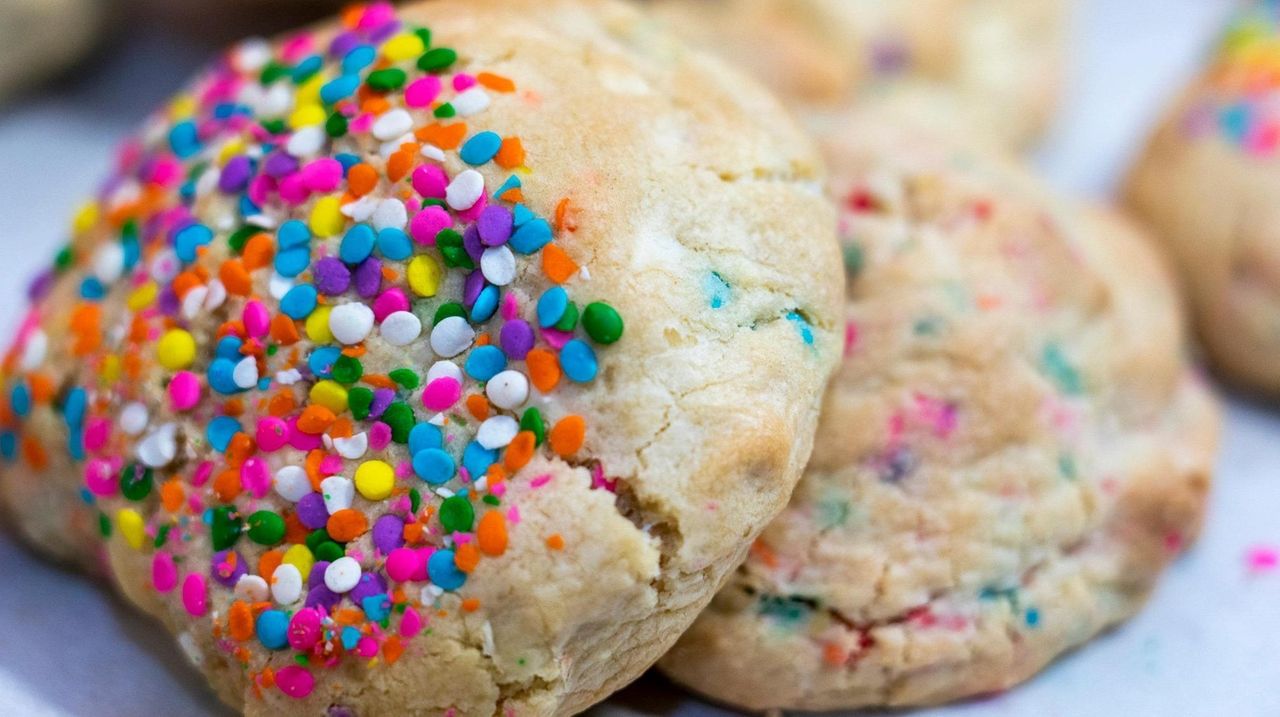 24 minutes. 27,000 cookies. How this LI company is selling out so fast My Cookie Dealer opens its Instagram account for orders only two days a week, Wednesdays and Saturdays, selling out thousands of cookies in a matter of minutes. Newsday food critic Scott Vogel got an inside look at the process on Sept. 19, 2020. Credit: Corey Sipkin

Twice a week, usually Wednesdays and Sundays, a five-second video is posted depicting two gloved hands breaking a cookie in half, revealing cinnamon roll and cream cheese innards, pumpkin coffee cake, peanut butter Oreos, you name it. The accompanying message — "TODAY, NOON, E.S.T." — elicits what can only be described as Black Friday-level hysteria. My Cookie Dealer typically sells out its entire fresh-baked inventory within minutes, which wouldn’t be noteworthy if the company didn’t presently have 50-plus employees producing upward of 70,000 cookies a week from its large and getting-larger factory in Nesconset. Many will be shipped far away, but many more, 18,000 packages or so, will be hand-delivered from Hempstead to Wading River with the aid of four Mercedes vans that the Morels recently purchased for the purpose.

"Juan has been in the spotlight for many years," says Karen of her competitive bodybuilding husband, whose career has taken the couple to meets all over the world. "People recognize him at checkout stands." Originally, Karen baked only to help Juan bulk up, but then his gym mates at Bev Francis Powerhouse gym in Syosset had a taste. They were promptly smitten, along with the rest of the world. These days, Juan is still being recognized at checkout stands, though now as My Cookie Dealer’s muse. "It’s better now," laughs Karen. "People don’t come up and grab his arms and touch him."

Of late, the difficulty of scoring the Morels’ wares has spawned at least one co-op in Huntington ("they buy different cookies and exchange them among themselves"), along with online support groups ("cookie junkies show each other how to do it") and commiseration. Some don’t take rejection well. "It’s always the people that weren’t fast enough," Karen says. "I’ve seen a lot of profanity over cookies."

Blake Warman, by dint of clever Instagrammage and an extraordinary will to succeed, is experiencing wild success at age 21 with his own online bakery, The Blakery. Perhaps even more remarkably, he has lost over 80 pounds along the way. Warman explains.

"Starting at around 10 years old, I was always the heavyset, short kid, and I always had a huge sweet tooth with a passion for baking," says the Jericho native, who splits his time between here and the University of Miami, where he’s a senior majoring in marketing and advertising. "But I was just unhappy with myself." Warman knew he needed to make a change, but didn’t want to give up his love of sweets. His solution? "Instead of eating everything I would make, I would start baking for my loved ones and friends."

For the past two years, Warman, a self-admitted go-big-or-go-home type, has dazzled his Blakery Instagram followers with parti-colored M&M cookies that a Kit Kat bar appears to have crash-landed into. He has stuffed a cookie with another cookie — an Oreo — and then topped it with yet another cookie, a Lotus Biscoff. He has decorated them with Cinnamon Toast Crunch cereal, stuffed them with vanilla frosting for a Dunkaroo (his most popular flavor, "people just love the nostalgia behind it"), and goosed a chocolate chip cookie with, in no particular order, pieces of caramel, bits of waffle cone, rainbow sprinkles and pop tarts — before stuffing the whole thing with hot fudge.

These days, Warman ships hundreds of orders nationwide each week, mostly to the east and west coasts, although a recent order arrived from France. ("I’m going global, I guess.") Meanwhile, as improbable as it might sound, Warman has tamed his sweet tooth.

"People ask, ‘‘why are you not 200 pounds?’" he laughs. "But when you’re around cookies basically 24/7, when you think about them when you sleep and shower — you don’t have to eat them."

Heather Friedfertig no doubt unleashed a few profanities of her own after losing both her jobs, as a waitress at Bellmore’s Brokerage Comedy Club and a Nikon customer service rep. "I didn’t want to make it big, I was just really bored," says the Wantagh resident, who on a whim decided to post some photos of her linzer tarts on Facebook, asking if "anybody wants me to make these, since I have nothing to do." Friedfertig was encouraged by the response, and not long afterward, while baking a batch of chocolate cookies, was suddenly inspired to wrap a ball of dough around a squirt of peanut butter. The ensuing eureka moment was captured for all posterity. "I have a video of my boyfriend and I breaking it apart and eating it," she remembers. The two were aghast. Chonky Cookies was born.

Friedfertig created an Instagram account for her "quarantine baby" on May 24, and within weeks she went from "literally never knowing how to do these things," to a full line of stuffed cookies named Bada Bing, Maple Bacon Pancake and Cotton Candy Circus and more. Every Tuesday, after taking umpteen orders for cookies — 5,000 sold during the first two weeks of September — Friedfertig not only bakes them in an Amityville coop kitchen, she also arranges pickup, shipping and delivery.

Friedfertig’s rapid rise in the baking world has been dramatic, especially for a 23-year-old, and yet she’s only the second-youngest cookie magnate on the Island.

And then there’s the grande dame of extreme baking, Melissa Blasberg, who’s been producing them for almost a decade, "before anybody was even stuffing anything in a cookie," she muses. "Too bad I didn’t trademark it." The Syosset resident and owner of online concern Balaboosta’s Bakery has gained a healthy following locally and beyond, and stuffed cookies are consistently among her most popular items. Over the years she’s hidden a number of embeds inside terrific-on-their-own chocolate chip cookies — cheesecake, dulce de leche, funfetti, even apple pie filling. Her own eureka moment? The day her father, Blasberg’s toughest critic and self-proclaimed "head of R&D," bit into a cookie, discovering a rainbow one inside. "He was blown away, he said ‘these have to get into a store,’" she recalls. Indeed, Balaboosta’s signature cookie has found its way into several retail Island establishments, most notably Syosset’s Bagel Master, which bakes them in-house every weekend. They are cookies both extreme and extremely warm, a double dose of decadence, and they sell out almost as soon as the oven door opens.

When Long Island’s cookie moguls are asked to speculate on the mania for all things extreme and stuffed these days, the pandemic, predictably, gets most of the credit/blame. But not all. As Blasberg puts it, "people are hungry, bored, going through a lot, and turning to food that comforts them." Then again, even in the best of times, she says, "who wouldn’t want a stuffed cookie?"