The July 13 tour will visit nine parlors from Rockville Centre to Riverhead, all noted for their ice cream’s quality, says tour organizer Jeff Noreman,  58, of Old Bethpage. And it's all housemade, from the first spoonful of a gelato-crowned Belgian waffle in Rockville Centre to the last licks of Riverhead's irresistibly chocolaty Peconic Swamp Thing.

“We only go to places that serve homemade ice cream that they make there. That way we know it’s fresh and served at its best,” Noreman says.

“I love chocolate, anything with peanut butter and birthday cake flavor is incredible,” says Pulaski, a vet technician.

Noreman, an information technology consultant, says he chose stores that produce ice cream on-site because, “when they make it in the place where they serve it, it doesn’t have a chance of melting and then getting refrozen, so it has a much smoother texture.”

He came up with the tour idea eight years ago after he and friends visited nine Long Island locations in one day. The next year Noreman and his business partner, Derek Steen, 32, of Bethlehem, Pennsylvania, decided to invite the public along. They posted a notice on social media — and almost 30 people arrived ready to indulge. Noreman expects as many as 50 people to join this year’s rally.

Tour-goers wear an official T-shirt or designated-color clothing (this year it's yellow) to recognize each other along the route.

In past years the caravan headed west from Riverhead, but this year it will be doing a reverse commute, beginning at 9 a.m. at International Delight Café diner in Rockville Centre. Noreman says, “we will be eating a relatively healthy breakfast before we sample their gelato.”

Or “you can get the gelato right on the Belgian waffle,” says International Delight Café owner Chris Testa. The café’s more than 80 gelato flavors include salted caramel and Italian favorites tartufo, amaretto and pistachio.

The car caravan (tourgoers need to supply their own ride) will proceed to eight other destinations coordinated by Noreman — from the ultra-classic sit-down soda shop Hildebrandt’s in Williston Park to the roadside Marvel Frozen Dairy in Lido Beach to the more contemporary McNulty’s Ice Cream Parlor in Miller Place.

The trail ends at the Snowflake Ice Cream Shoppe, the venerable Riverhead roadside attraction with a neon ice cream cone on its roof. 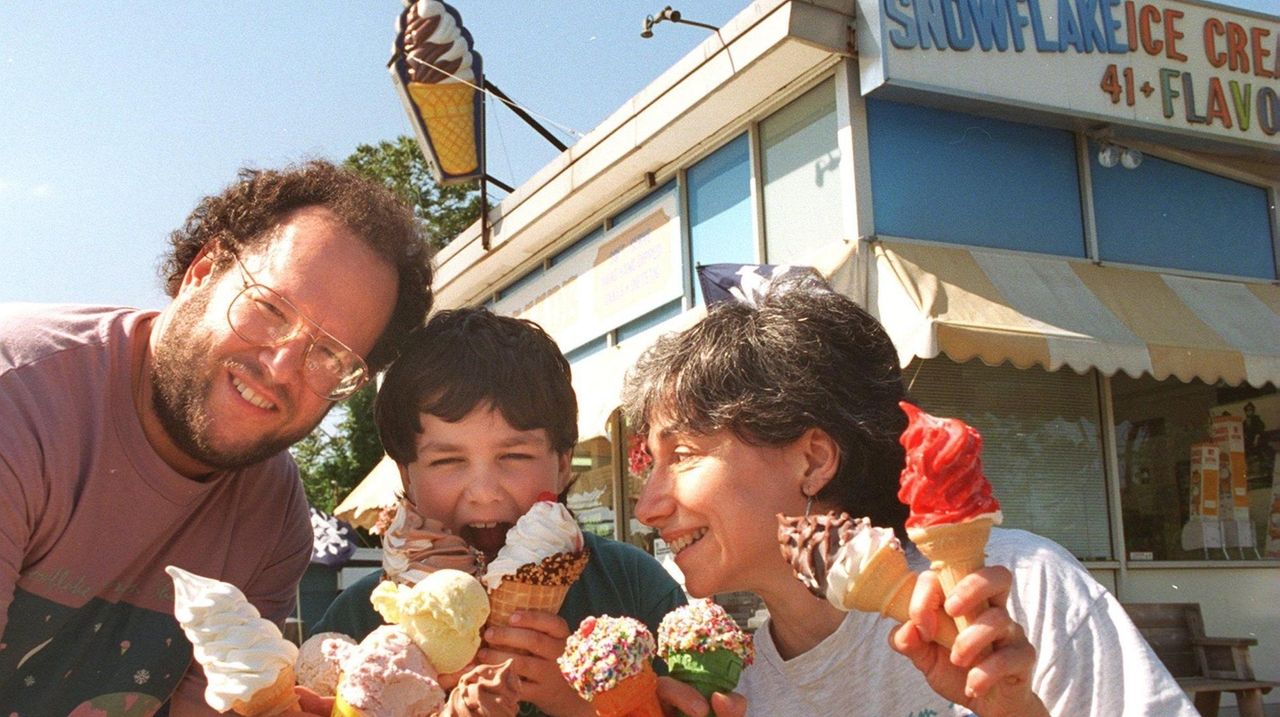 A World of Sundaes As a child, Stu Feldschuh dreamed of owning an ice cream parlor in his basement. He got something better – Snowflake Ice Cream Shoppe in Riverhead. Now he brings back that little bit of childhood joy, one lick at a time.

If the all-day tour sounds like a lot of calories, remember that July is National Ice Cream Month, says returning tourer Toby Gopen, 63, a retired schoolteacher from Lake Success. Gopen looks forward to visiting “some of the best homemade ice cream places on Long Island” on a summer day with fellow ice cream lovers.

Says Gopen, “Forget your diet, just go and enjoy yourself.”

TICKETS: $20.70 includes T-shirt (register at liict.org by July 7) and access to promotions at participating stops.