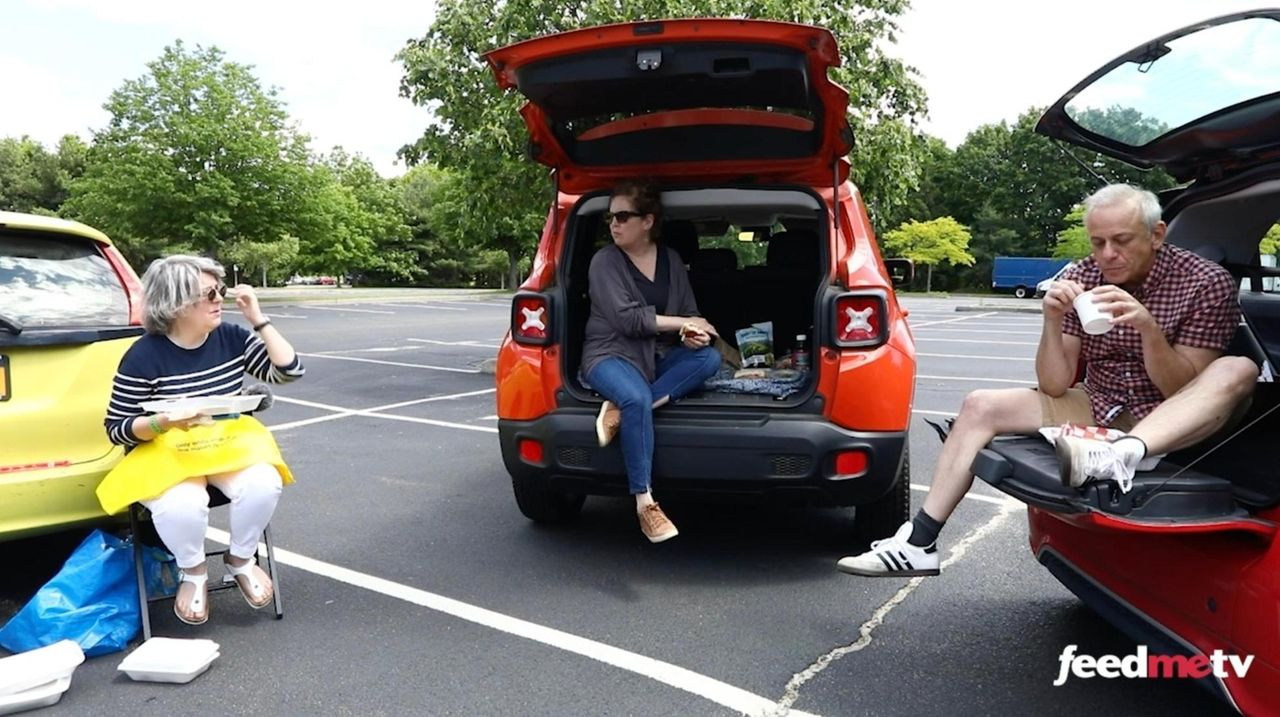 Newsday's Erica Marcus, Scott Vogel and Corin Hirsch met up on June 1 for a socially-distanced tailgate lunch in Newsday's parking lot. The trio talked about what they've been eating and what they miss the most.  Credit: Newsday / Chris Ware

It’s like this: 12 weeks have passed and the poor, long-suffering souls with whom you’ve quarantined have been tortured long enough. The time has come for you to dig yourself out of that Wayfair Barcalounger, throw on something body-inclusive, mask up and seek out someone new to pester. Surely there's somebody out there who hasn’t tired of your copycat Cracker Barrel meatloaf, somebody unaware that your nuanced ideas on a second wave were actually cribbed from the Atlantic, somebody who’ll stop asking you where the Swiffer is because you’ve told them four times. But who?

As the phased reopening of America continues apace, the question of who you should be reopening yourself to is just one of many you’ll be asking yourself in the summer to come, a strange purgatory season during which some things will be advisable and many others not. What is the perfect neutral setting in which to reconnect with long-missed cronies? What should conversations consist of? What food should be served?

That enormous psychological benefit may be gained from what I call reunion tailgating is something that experts do not dispute — presumably because I never asked them. Still, be advised that successful meetups do not simply happen on their own. Every aspect of these reconvenings must be carefully considered.

Selecting the perfect tailgating partner requires finding a sweet spot among the members of your social circle: on the one hand, it should be someone you like, and on the other, someone you like even more from a distance of, say, six feet. Think that lovable old-timer spinning tales carried aloft by halitosis, wild gesticulators, people who keep an arm around your waist just a shade too long. Additionally, focus your search on forgiving, tolerant, non-judgy types. This is not the time for people who will laugh at how crooked your bangs are, or shudder that last night’s dinner consisted of a margarita and two sticks of Sargento string cheese, or question your view that a sixth grader can gain both valuable problem-solving skills and a hearty introduction to Ptolemaic Egyptian history by playing endless rounds of “Assassin’s Creed.”

In short, stick with those whose values and life experiences you share. “All four of us were looking forward to getting away from technology and getting off our phones,” says Mike Cimafonte of Mineola, who was recently spotted, along with his wife Amanda, cavorting at a safe distance from another couple in East Meadow's Eisenhower Park. “They’re friends that have kids at a similar age with similar experiences …. It makes for good conversations and stories to tell.” Yes, such conversations can also be conducted via video conference, as the quartet had done the previous month. But Zoom and its allies provide, at best, mere palimpsests.

“We enjoyed being outside and getting some sun,” as Cimafonte puts it. “It was really good to see actual humans.”

You will no doubt want to commandeer a park, beach or other scenic backdrop for your tailgate — and so will everyone else. Think outside the lot. In addition to our suggestions, don’t overlook the vast salt flats of shuttered shopping mall parking lots, the rest stop rusticity of the Long Island Welcome Center in Dix Hills, the asphalt acreage surrounding schools, libraries, gyms and churches. And not to be morbid, but several victims of this summer’s cancel culture may well suggest tailgating opportunities, too (think big, wide open spaces that won't be hosting music under the stars and festivals). The possibilities are as endless as the list of things you won’t be doing this summer.

“We hadn’t seen my family in well over three weeks,” says John Shewchuk, who celebrated his mother’s birthday earlier this month outside Cohen’s Fashion Optical, next door to Bigelow’s in Rockville Centre. “While the parking lot wasn’t ideally scenic, it was the closest you could come to eating the freshest fried seafood.” Shewchuk’s experience reminds us, once again, of the importance of choosing a locale that accurately reflects your group’s values. After that, he says, “just add masks, chairs, Clorox wipes and keep the group to the government recommendations.”

While COVID-19 is in no sense a foodborne virus, social distancing guidelines are anathema to buffet gatherings--so avoid them. Packing one’s own lunch is a small price to pay for the privilege of reunion tailgating, and while conventional fare is always an option (Oscar Mayer whatever, Aquafina, kettle chips, squeeze cheese), the careful choice of provisions can send a powerful message to fellow tailgaters. Nothing says let’s not go back to the way things were like steak sandwiches on mini-baguettes slathered with palate-slapping cherry tomato jam, and that’s just one of 100 recipes to be found in “The Hamptons Kitchen,” a fine new cookbook by Long Islanders Hillary Davis and Stacy Dermont. Thankfully, the pair’s effort — about “entertaining small groups simply at home using local, seasonal ingredients in flexible recipes, paired with local beverages," Dermont says — is eminently pandemic-friendly. And not only is that steak sandwich delicious and “perfect for a tailgating party, perhaps in one of our amazing vineyards,” as Davis puts it, in a pinch it can be lobbed intact across a Walmart parking lot — no small consideration if your tailgaters are the sort to “forget” their own food.

WHAT TO TALK ABOUT

Deciding in advance which topics will be appropriate and which off-limits should be the last but not least of your concerns. Broadly speaking, three types of taboo subject matter can be identified. First, all the things everyone is sick to death of talking about, to include sourdough starter, sanitizer-chapped hands, toilet paper shortages, the lack of a national testing strategy, #alonetogether. Second, anything that might cause hackles to be raised: the tradeoff between lives and livelihoods, saying you’re fine when you aren’t, how gray Sharon has gotten, the sad truth about virtual happy hours. Finally, and most important, resist speculating about things that no one in the world could possibly know, much less a few tailgaters sitting in a circle: how many people are infected, when a vaccine is coming, what tomorrow will bring. Stick to the things that can be determined with reasonable certainty: how unlikely it is that you will learn to dribble like Steph Curry by watching a video of Steph Curry dribbling, the importance of laughing at our mutual ordeal from time to time, and, crucially, the time and place of your next tailgate.

WHERE TO TAILGATE ON LONG ISLAND

Here are just a few places whose parking areas have played host to tailgaters lately. Note that some may impose residency restrictions: