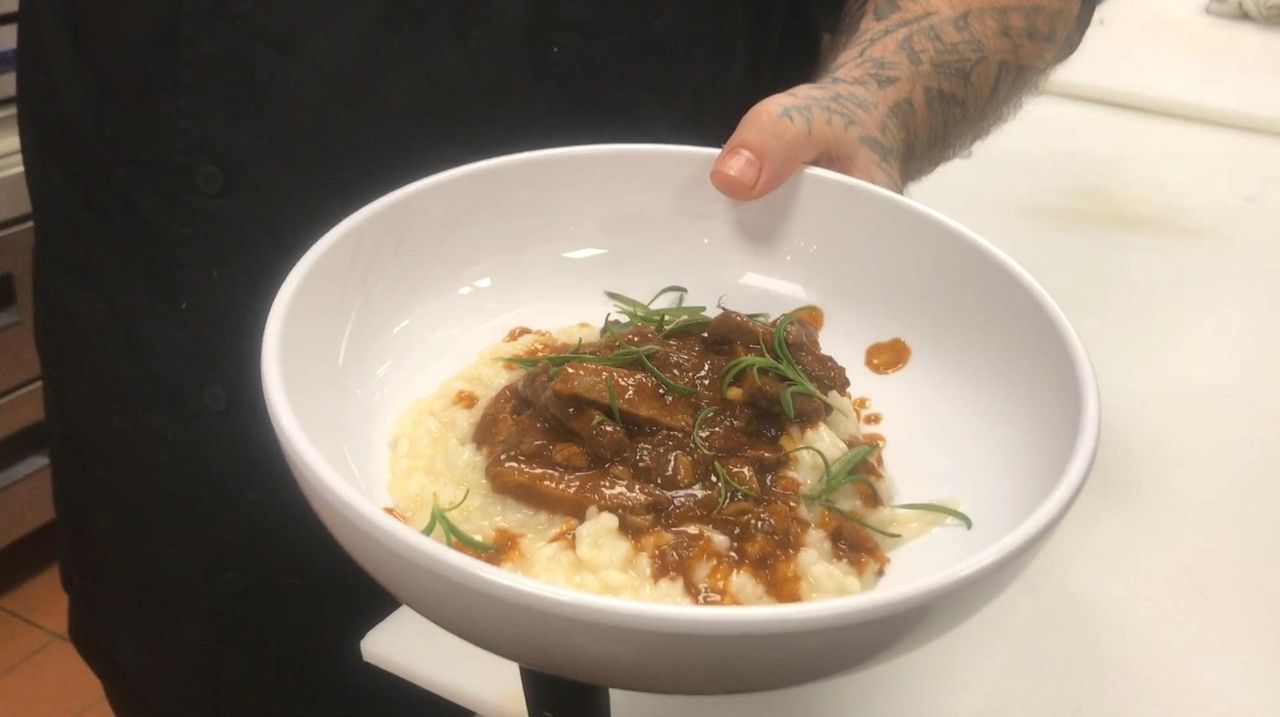 317 Main Street in Farmingdale is a new offshoot of The Nutty Irishman next door. It has kitchen-side seating and a menu by executive chef Eric LeVine, winner of Food Network's "Chopped." Credit: Newsday / David Criblez

Farmingdale’s culinary quotient is about to be cranked up a notch as 317 Main Street opens Tuesday. The team behind next-door neighbor The Nutty Irishman goes gourmet gastropub with a menu that focuses on artisanal comfort foods and craft cocktails.

“Each dish has an experience to it,” said executive chef Eric LeVine, who has spent the last seven years as chef-partner at a number of New Jersey restaurants and, in 2011, won the "Prove it on the Plate" episode of season 6  of Food Network’s “Chopped.” “We’re not into, ‘Here’s your food, thanks for coming!’ We want people to feel good about their time here.”

The restaurant rocks a rustic farm barn vibe with tables, spaced for breathing room, made of reclaimed wood from Orient Point and walls covered with recycled light brick from Chicago.

The 100-seat dining room's focal point is the open kitchen. “We want people to be able to see what’s going on,” LeVine said. “In a Food Network world, people are a lot more interested in what goes on in the kitchen so we give them the show.”

A counter in front of the kitchen will offer a Chef’s Table experience with either a six-course (two hours) or 10-course (three hours) tasting menu, which starts at $100 per person and is reservation only (up to six people).

The regular menu is eclectic. Starters include Chinese chicken soup dumplings ($11), "lazy susan" lettuce wraps ($11) where guests can build their own with chicken satay or garlic shrimp plus pickled carrots, radishes, enoki, scallions, peanuts and bibb lettuce. Salads ($10 to $16), whether Cobb or wedge or tuna-sashimi, are bound to get attention. “We layer them in glass jars with dressing,” said LeVine. “The server comes tableside, shakes it like a martini and pours it onto the plate.”

Down for a craft cocktail? Try The Smoking Gun ($13) featuring Duke bourbon, brandy, chinato, amaro, cynar, raspberry, vanilla and walnut bitters and smoked at the table for "a deeper, richer flavor."
The bar has a rotation of ten beers on tap plus over 20 bottled as well as hard selter and an extensive wine list.

317 will also host a 500-seat music venue slated to open on Sept. 27 with a New Wave Night Celebration for WLIR (92.7 FM) with DJs Larry the Duck, Andre and Rob Rush spinning.