Tall, fit and 82, Tom Wickham walks like a man whose family has owned the ground beneath his feet for hundreds of years, and indeed someone named Wickham has worked Cutchogue soil since at least 1661. It is a serious farm and Wickham is a serious man, and yet there may be no better place to enjoy that most unserious of autumn pursuits, picking your own apples. Other farms on the North Fork and elsewhere greet visiting hordes as an amusement park might, fearful that apple picking might not be an amusing enough draw. They promise bounce houses, eating contests, hay rides, maize mazes, live bands. Wickham promises to pull a wagonful of pickers to his orchard with a tractor, then pull them back.

"I’m really not interested in entertainment-type farming," he said on a recent Saturday afternoon, calmly holding court in the center of the orchard even as families raced around him in all directions. "I am interested in people who genuinely want to pick apples." Whether for that reason or some other, many have made the annual pilgrimage to Wickham’s for 30-plus years. 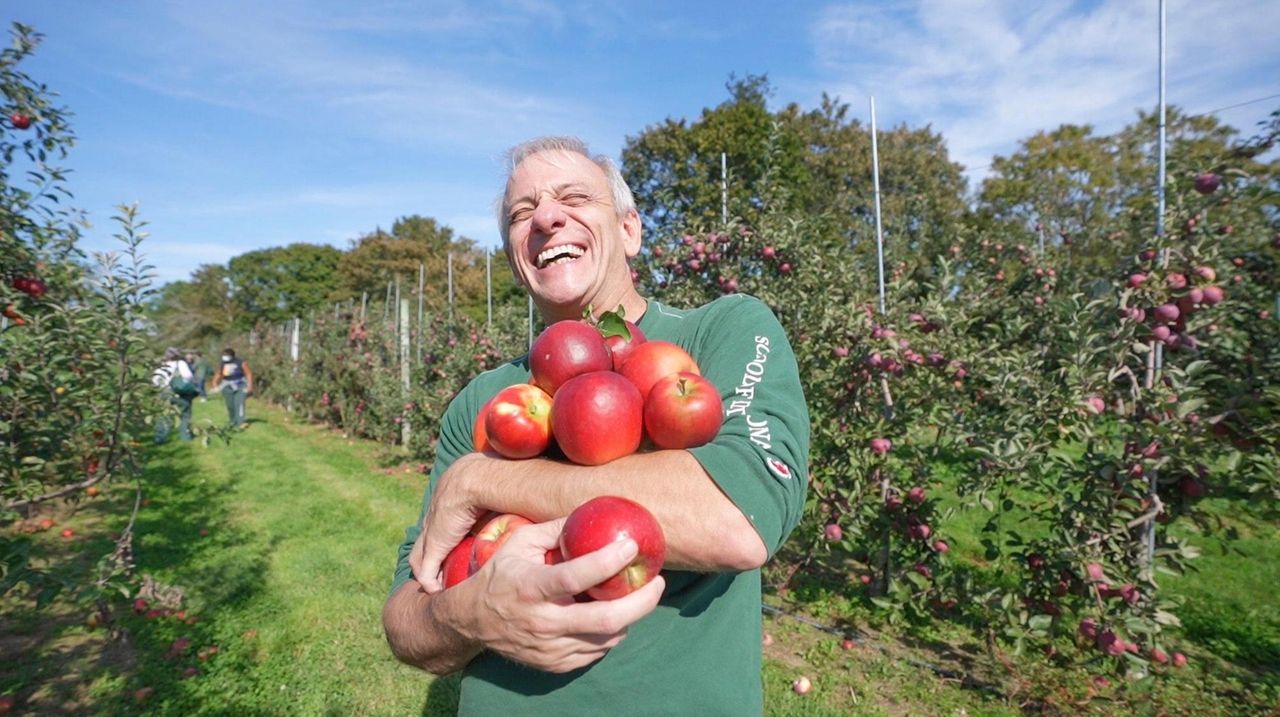 They come for the apples, of course — this day there were Macoun, Empire, Mitsui and more to be picked — but also for the reassuring presence that is Wickham himself, for his gentle demonstration of proper picking technique ("you don’t turn it, you roll it over the top"), and for all the latest news from the world of apples. There’s more than you might think. To chat with Wickham is to find yourself suddenly caring about cross-pollination methods, the New York State Agricultural Experiment Station’s underfunding by the state legislature, his love-hate relationship with Golden Delicious — a mediocre-tasting apple but good for breeding — and the excitement that is SnapDragon. In Wickham’s hands, an apple’s origin story is nothing short of enthralling.

"Plant breeding is basically a random shot in the dark of cross-pollinating one flower with another flower," he said. The process is tedious and the results usually frustrating. "Ninety-nine-point-nine percent of the apple trees that develop from those crosses are mediocre. But every once in a while there’s a really good apple, one that is just so good that they say, OK, this one has promise. Let’s plant it out in the field and see how it grows."

That’s what happened with SnapDragon. First developed by Cornell University’s apple breeding program a decade ago, the new variety — it counts Honey Crisp among its parents, by the way — proved sweet but also spicy, prolific and disease-resistant, two-napkin juicy and super crunchy, all qualities prized by consumers and growers alike. Six or seven years ago, Wickham began planting SnapDragon — as well as RubyFrost, another promising newcomer — and this year both have gone into what he called "heavy production," also known as a sight to behold.

In the back of the orchard, planted in two endless rows, were dozens of SnapDragon trees, each loaded with shiny, crimson fruit — or they were until 10 a.m. that morning, when the first pickers arrived. Having had the misfortune to ripen on the most beautiful Saturday imaginable, the trees were mobbed, attracting the attention of nearly every picker fresh off the wagon. The scene taking shape was one of both merriment and carnage, the grass strewed with fallen apples, half-eaten apples, apples people had picked and then changed their minds about.

Wickham didn’t seem to mind, though. Not only would he sell many bushels of fruit this day, he knew that every picker would leave with more than apples. "I really enjoy it," he said, gazing at the multigenerational throng weaving its way through the trees. "It’s just a pleasure for me to acquaint people with the roots of farming, the real thing of farming."

Admission is free but requires purchase of bag ($45) to collect your haul.

For more places to pick apples on Long Island, see our full guide.

Fire pits, pizza gardens and more: The ultimate guide to fall dining on LIAs summer's beachside eateries wind down, fall's cozy heated patios, beer gardens and private dining igloos kick back up. Go apple picking at these LI farms this fallFrom Honeycrisp to Golden Delicious, there are all kinds of apples waiting to be picked at Long Island orchards this fall.

Retired friends open coffee and pastry shop in Amityville
Pumpkin-shaped bagels and more fun fall treats to try
Halal chain opens second LI location, in Commack
Have eyeballs and bones in your dinner at this Halloween pop-up
Slovakia extends COVID-19 restrictions amid infection surge
4:20
Inside LI's top-rated restaurant on Yelp
Didn’t find what you were looking for?