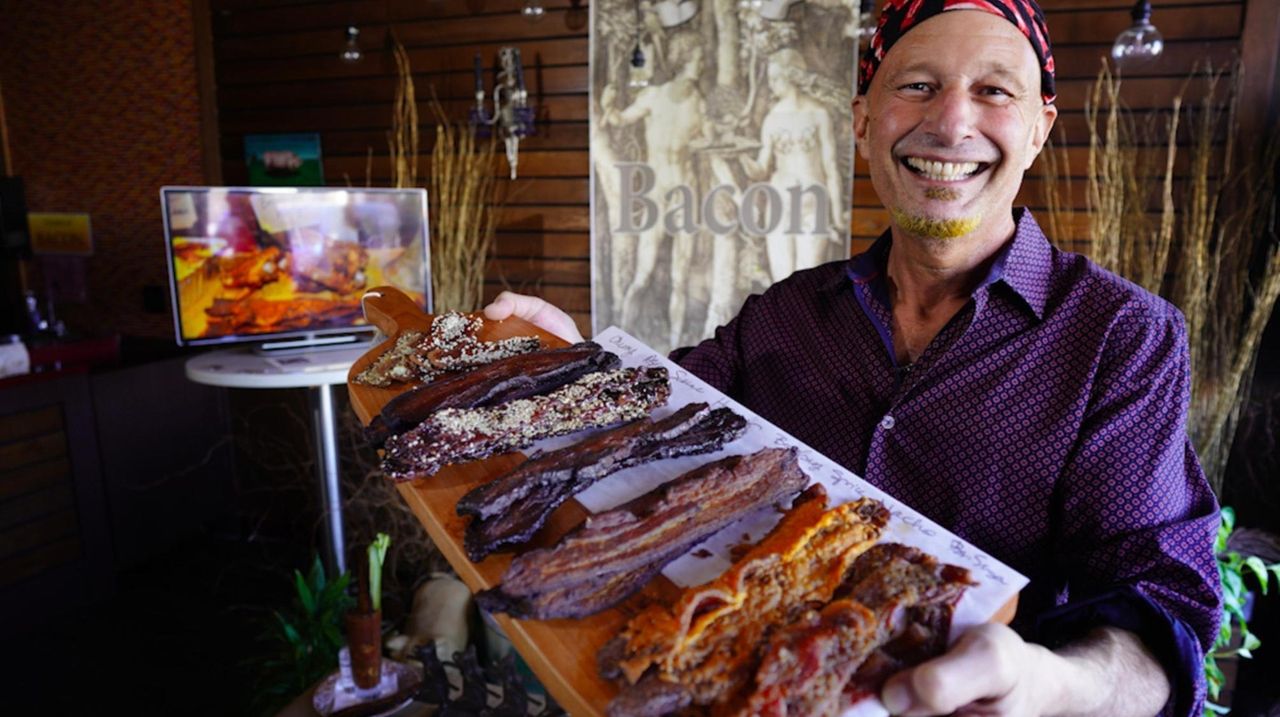 How absurd are the times we’re living through, you ask? This absurd: Harry Schwartz, a 63-year-old chef-entrepreneur, runs a cozy Glen Cove emporium that sells almost nothing but bacon. What’s so wild about — wait, I’m not done. The shop opened just after Christmas, in the midst of a raging pandemic. Well, OK but — Schwartz suffered two heart attacks in 2007, another one in 2010, then in 2012 was diagnosed with stomach cancer. And now he owns a place called Garden of Bacon. A man with a three-coronary past peddling bacon in a pandemic — that’s what it’s come to.

If Schwartz were anyone else, his actions might elicit little more than an Islandwide shrug. He is no one else. He embraces his contradictions with gusto. Spending an hour with him means abandoning every single one of your pandemic doldrums, marveling at one man’s unsinkability — and consuming an obscene amount of thick-cut bacon.

"Everything in moderation!" Schwartz announces with a laugh. A sizable percentage of his sentences end in exclamation points. "I wouldn’t recommend that you eat it every day."

And yet there is hardly a moment in the day that he hasn’t baconized. Schwartz and his team offer bacon caramel cinnamon rolls at breakfast time, massive BLTs and cubano sandwiches for lunch, bacon folded into pappardelle or tossed with Brussels sprouts for dinner, and bacon pumpkin nubs for anytime your dog deserves a treat day or night. Still in the development phase are cones of bacon-flavored soft-serve frozen custard with a hot fudge bacon topping, bacon strips encased in cayenne-spiced chocolate and then dipped in bacony marshmallows, and Schwartz’s own take on plant-based bacon.

Pork bacon strips remain his biggest sellers, though they resemble their supermarket brethren in name only. A rotating list of five or so varieties is available every day, in flavors like cherry maple, Asian sesame, honey and curry, each an almost-foot-long plank, sturdy, perfectly flat. All are reasonably priced given their size (3 for $5), and all are cooked on the premises using special ovens from New Zealand capable of turning out 250 slices in 20 minutes. In its first three months of existence, Garden of Bacon sold over 30,000 strips of bacon, according to Schwartz.

"And we haven’t even begun our wholesale yet," he continues. "I’m amazed, and super, super appreciative of the public’s reaction to what I’m doing. I’m just shaking my head. I didn’t go to cooking school, I went to business school."

That said, Schwartz has spent much of his life preparing, publicizing and hawking food. After an initial wrong turn into the scrap metal business, he pivoted to cookbook-writing, which led to "Chef Harry’s Friends," a show that ran on PBS during the late ’90s and early aughts, as well as stints as a paid representative of several food concerns. Over the years, he has given dozens of brands thousands of ideas for improving market share. "I was the spokesperson for the National Watermelon Promotion Board for 13 years, and in that time I created 125 watermelon recipes."

“I am very lucky to be alive, and very grateful, just the luckiest guy you will ever talk to.”

He will tell you that his cancer, though in remission, has left him with a permanently weak core. Still, you can hardly believe it. Asked what his secret is, he doesn’t hesi — "I am very lucky to be alive, and very grateful, just the luckiest guy you will ever talk to." While Schwartz may have "looked death in the face multiple times," each time death appears to have blinked first, disarmed no doubt by his warm smile, the same one he devotes these days to looking life in the face.

That he and bacon found each other after health issues sidelined him for several years is something else Schwartz is thankful for, although in retrospect it seems like fate. His story is proof that the terrible and great can coexist, and what is bacon but terrible/great — a treat that Americans continue to find irresistible even as nutritionists warn of its harm. Just last month, a major UK study found that bacon-eaters were at increased risk of dementia, while another in Canada linked bacon and other processed meats — for the umpteenth time — with greater instances of heart disease. The same month, meanwhile, Nike rereleased a limited run of its Air Max 90 Bacons, a legendary-to-collectors sneaker that is pink, tan, brown and white ("a range of shades reflecting the dish in various stages of preparation"). The $140 shoes sold out within hours. Also snapped up: 1,500 pair of shoelaces that make one’s feet smell like bacon, a cross-promotional effort courtesy Oscar-Mayer.

In an absurd age, the happiest man is he who embraces life’s absurdities, or so one might conclude from Harry Schwartz’s story. Perhaps, then, we should all become bacon-loving heart patients. Perhaps we already have. Even as health concerns were front and center during the pandemic, bacon sales went through the roof, according to the National Pork Board.

"It was a really strong story for bacon," said a spokesperson.