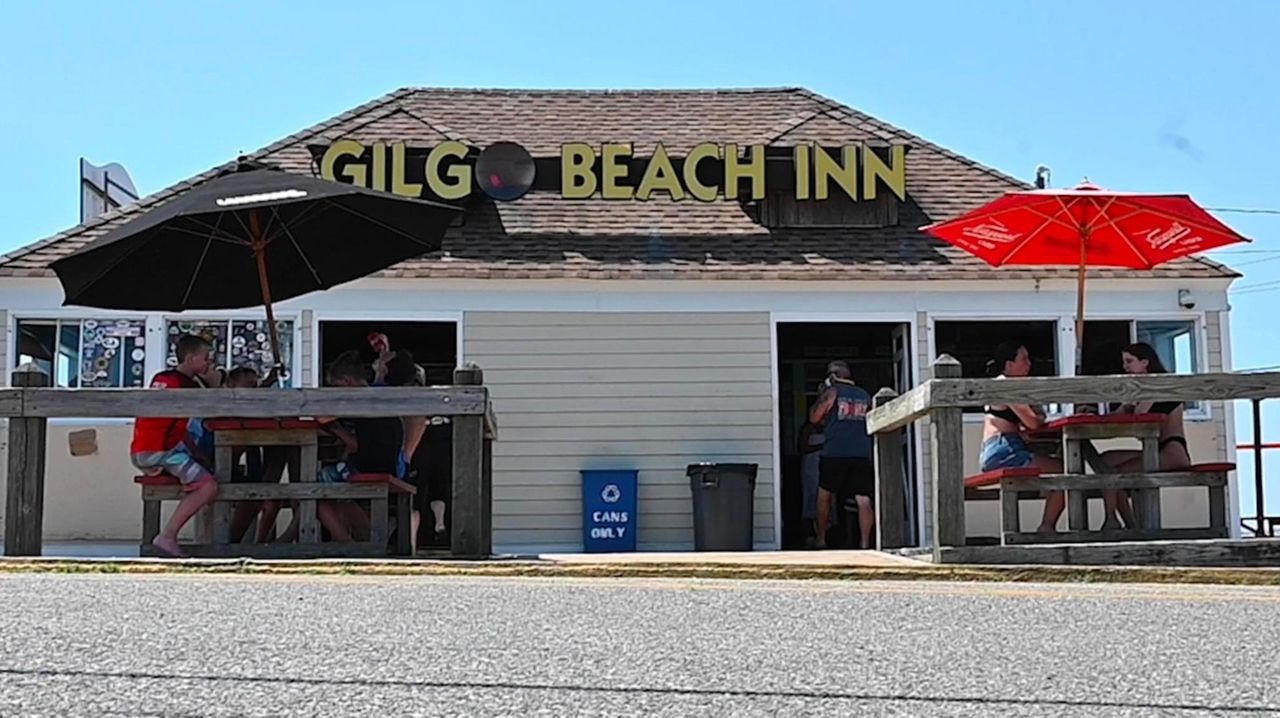 Nostalgia rules at the Gilgo Beach Inn, the snack bar-restaurant perched on the Great South Bay that has seen many owners and even some hurricanes.Co-owner Paul McDuffie talks about keeping the spirit going for customers. Credit: Newsday / Alejandra Villa Loarca

Squint at the Gilgo Beach Inn to obscure the cellphones and face masks and you could be looking at a scene from any one of the last eight decades.

Gilgo occupies the narrow midpoint of the barrier island that extends from Jones Beach to Captree State Park. The 1,200-square foot structure, facing the bay but just an underpass away from the ocean, functions as a snack bar, a community center, a relic and, ultimately, a living museum of itself.

“Everywhere you look is a story,” says co-owner Paul McDuffie. And that's no exaggeration.

In high summer, it is normally hard to focus on the architectural details, mobbed as it is by sun-kissed kids lining up to get their burgers and frozen Charleston Chews, or by post-beach quaffers knocking back plastic cups of pina coladas and cans of Montauk Summer Ale.

But in this season of COVID-19, the interior is sparsely populated and you can appreciate how little has changed over the years — not the bleached-wood floor nor the rich, glazed paneling nor the worn bar that wraps around two of the walls. What “improvements” have been made tend to correct ill-advised prior renovations, like the corrugated metal ceiling that last year replaced particleboard, a bad idea from the '70s.

Multiple rows of framed photographs tell the building’s history: built in 1935 swept away to sea in the hurricane of 1938 and rescued by, McDuffie said, “by a bunch of guys on a clamboat who put it back, bolted it down and hosed it out.”

There’s Robert Moses, who had a home in Gilgo Beach and died there in 1981, posing with an associate so that you can clearly see the causeway that bears his name being completed in the background 30 years earlier. There’s a '50s-era sea plane landing (or is it taking off?) in the bay. There's the inn, done up tiki-hut style, thatch protruding from the roof, with a Beach Boys-era crowd of surfer girls and boys hanging out, resplendent in Hawaiian prints. The two handsome, bearded young men captioned “Rob & Eddy 1978” are Rob and Eddy Hilbert, who were running the inn when McDuffie first wandered in as a barefoot seven-year-old.

Rob and Eddy’s father and uncle, Jim and Joe, bought the place in 1961 (the younger Hilberts formally assumed ownership in 1985). The Hilberts were preceded by the Truhan Family that, as far as anyone can tell, purchased it from Arthur Ketchum Bennett, who is on the record petitioning the Town of Babylon to rezone the property from residential to commercial in 1934. He died five years later.

McDuffie grew up in Freeport and his parents finished construction on their summer cottage in Gilgo Beach in 1978. Walton McDuffie was a funeral director, an important personage in that community who, his son said, was also perennially pestered to contribute to this cause, sponsor that team. “He wanted a place with some privacy,” he said, “and Gilgo was off the grid.”

Back then, McDuffie recalled, “there were very few year-rounders living here, there were no streetlights — heck we just got internet last year.”

Paul spent his summers swimming, fishing, clamming, duck-hunting, basically living outdoors because “there was nothing else to do.” He grew up, went to Fordham University, became a teacher (he teaches 6th grade English in Bay Shore) but he never left Gilgo and, in 2009, he converted his parents’ cottage into a year-round residence for him, his wife, Ranae, and two sons.

In 2014, Rob Hilbert was dying of cancer and McDuffie began to think seriously about buying the inn. “Am I the right guy?” he asked Rob. “It’s a ton of work,” Rob responded, “but you can do it.”

But he wasn’t going to do it alone. McDuffie called Steve Stratigos, a college friend who was a more recent, but equally enthusiastic, convert to the Cult of Gilgo. “Back in the day,” Steve recalled, “we’d talk about buying the Gilgo Beach Inn, but it was like we talked about ‘one day we’ll sail across the ocean, one day we’ll go to Belgium.’”

The two men bought the place in 2015 and set about doing … very little.

“One of the reasons we bought it,” McDuffie said, “was that we didn’t want anyone coming in and changing it — adding a roof deck and lobster rolls and tacos and live bands. I saw my responsibility as carrying the torch. And I hear all the time from my customers ‘thank God you left it the same.’”

The menu still fits easily on one of those old-fashioned white boards with black press-on letters: 11 grill items and the same number of frozen sweets. The prices are old-fashioned, too: $4 franks, $5 hamburgers. McDuffie and Stratigos don’t skimp on the provisions. “It’s a natural-casing Sabrett hot dog, burgers from Janowksi’s in Rockville Centre, real kaiser rolls from Lakewood Bakery and crumb cake from Hahn’s (both in Farmingdale).

One reason for the limited menu is a lack of space for both cooking and storage, but the new owners did introduce an egg sandwich for morning customers. “Back in the day,” McDuffie said, “if you didn’t want crumb cake for breakfast, you could have a burger with your coffee.” On the drinks front, they added rocket fuel, the tropical-meets-actionable national drink of Fire Island, as well as their own concoction, a rum punch whose one nonsecret ingredient (aside from clear rum) is guava nectar.

During the season — roughly from May 1 through Halloween — the inn is open seven days a week from 9 a.m. to 7 p.m. (you'll need a Town of Babylon beach sticker to park) but, McDuffie said, the hours are flexible. “If I get up and see the waves are cranking, I’ll open early for the surfers, and if folks are hanging past seven, I’ll stay open later.

If there’s one change that he regards as an unqualified improvement it’s the music. Every day, “it’s breakfast with the Grateful Dead,” which segues into midday light rock: Tom Petty, Neil Young, Bob Seger, The Pretenders. As lunch eating gives way to afternoon drinking, he keeps the vibe mellow with reggae and Jimmy Buffet. Said McDuffie, “We do not want people dancing on the tables.”

Beloved family-owned bakery in Floral Park opens new bistro
Oktoberfest bar crawl coming to Wantagh this weekend
Have eyeballs and bones in your dinner at this Halloween pop-up
LI's ramen boom: 5 new places you have to try
FDA spells out lower sodium goals for food industry
NYC chef opens intimate Italian market-cafe on LI
Didn’t find what you were looking for?