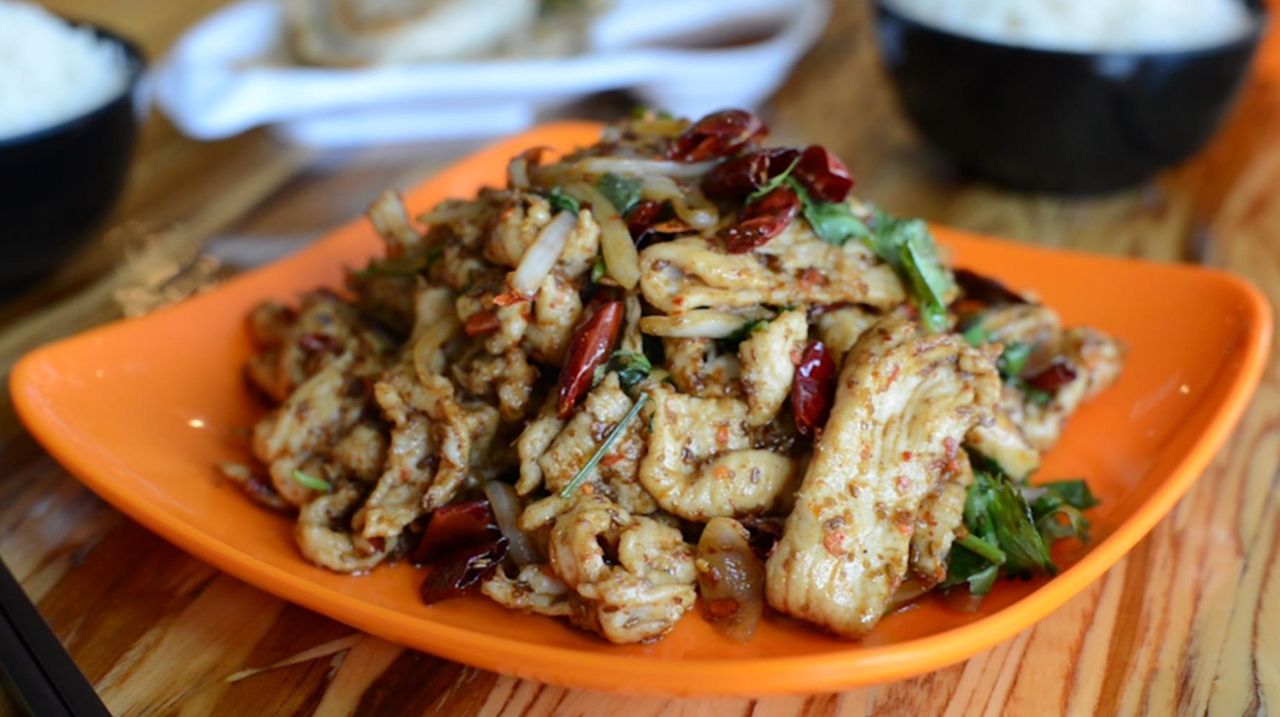 Beichen Hu, a graduate of Stony Brook University, noted the efflorescence of Chinese restaurants that have sprung up to serve that school's Chinese students, and figured that Grain House could do the same for Hofstra University's students. Now pot stickers and cumin lamb have taken their place along among the burgers and shakes along Hempstead Turnpike in Uniondale. Credit: Daniel Brennan

The stretch of Hempstead Turnpike that runs through Hofstra University is not a fruitful one for diners looking to break the bonds of fast food. Heading west from Nassau Coliseum, you’ll encounter Subway, Friendly’s, Wendy’s, Sonic, McDonald’s and Jersey Mike’s Subs before you even cross over into Hempstead.

But now pot stickers and cumin lamb have taken their place among the burgers and shakes. In April, the Chinese restaurant Grain House took over what, for two years, had been the country’s largest BurgerFi.

This is a second location of Grain House for Beichen “Bob” Hu and partner Zhiming “David” Tan, whose original Grain House opened in Little Neck, Queens, last year. With its refined, mostly Northern Chinese menu, the Queens location made quite a splash, even scoring a listing (though not a star) in the 2017 Michelin Guide to New York City.

Hu, a graduate of Stony Brook University, noted the efflorescence of Chinese restaurants that have sprung up to serve that school’s Chinese students, and figured that Grain House could do the same for Hofstra’s.

For Uniondale, the Queens menu has been reworked to appeal to a clientele that is hungry but budget minded. In fact, it’s reminiscent of the menu at China Station in Stony Brook, another edge-of-the-campus eatery whose food I described in December as “blunt force chow.”

But where China Station is fairly bursting out of its little storefront, Grain House is dwarfed by its surroundings, a 6,000-square-foot building whose reclaimed wood walls and industrial-chic accents have outlived BurgerFi’s tenancy. The setup is the same too: Peruse the menu at the counter, place your order, and it will be delivered to your table in the 200-seat dining room.

Grain House offers nine dumplings, and my favorite were the pan-fried leek dumplings, aka chive pockets, a Northern Chinese street food. They’re big, semicircular envelopes — two to an order — filled with chopped flat chives and bits of scrambled egg and strands of vermicelli noodles. I also liked the stubby, pork-filled pot stickers, but the soup dumplings were weak, insufficiently porky-succulent and lacking the exquisite crimping you see in restaurants that specialize in Shanghai cuisine.

Vegetarians have plenty to choose from here (including those leek dumplings), and many of the meatless dishes are based on vegetables that we don’t think of as Chinese. A big bowl of stir-fried cauliflower delighted us with its unexpected kick of curry. The classic homestyle dish of scrambled eggs with tomato was a little sweet for my taste, but I was entranced by the shredded potato with salted egg yolk. Here potatoes are cut into thin matchsticks and fried briefly so that they pick up neither color nor crisp, only a silky languor. The egg yolks — cured in salt until they achieve a texture and mellow pungency reminiscent of Parmesan cheese — are grated on top. Another winning vegetable dish — though emphatically not vegetarian — was eggplant with minced pork, impossibly purple, glistening with oil.

Most of Long Island’s Northern Chinese restaurants serve a version of cumin lamb, which originated in the country’s far northwest where sheep are the principal livestock. At Grain House, the franchise has also been extended to chicken, tender slices that have been inundated with cumin and showered with dried red peppers. I was intrigued by something called lamb wrapped tinfoil; it turned out merely to be a pleasant stir fry, with plenty of peanuts and cilantro, served on a sheet of foil.

Grain House’s casual, student-friendly vibe had me pumped for great noodles, but none materialized. Cold sesame noodles, a Chinese-American standard, were listless. Dan dan noodles, a Sichuan standard, were overcooked and evinced none of the dish’s essential complexity. Knife-cut noodles (identified on the menu as hand-pulled) languished in a bland lamb broth.

It’s not easy to share food here. Dishes are served in sturdy melamine dishes and bowls, but the only tools available for apportioning them are chopsticks and plastic forks and spoons. Flimsy paper plates are inadequate to the task of supporting such heavy, sauce-rich food (ditto the tissue-weight napkins).

But these are quibbles in the face of fast food. The next time I’m looking for a good quick meal before a show at Nassau Coliseum, I’ll make a beeline for Grain House. In a neighborhood full of chains, authentic Chinese food is a blessing.